Happy Hallowe'en: Starfleet Alien and a Werewolf of London

Happy Hallowe'en! This is one of my favourite holidays, and if you've been reading my blog for over a year, you know I love to dress up!

This year, I organized a group costume for my office. I explained it all last year, here, if you're curious, but it's basically a Star Trek theme made super easy. Wear a red top and a black bottom. 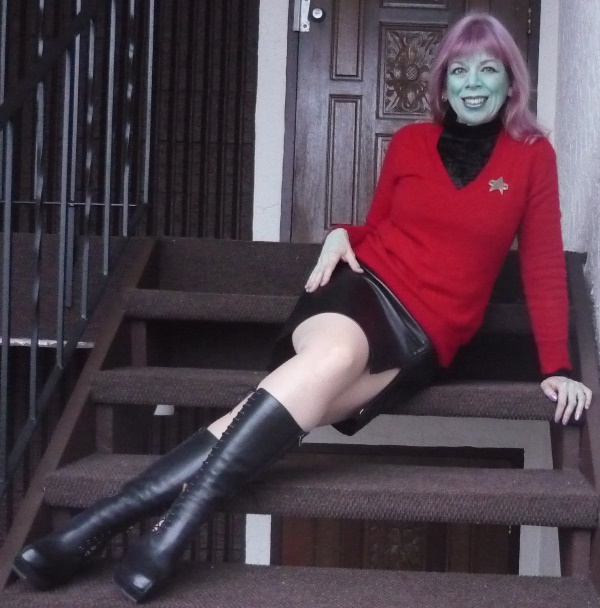 As I had troubles with tribbles last year, I wanted to do something different this time, so I am a Starfleet alien, the kind Captain Kirk was always making eyes at. A hot babe!

I'd considered a Futurama/Leelah mash-up, now that my hair is long, but I didn't really feel like going back to dark purple just for one day. 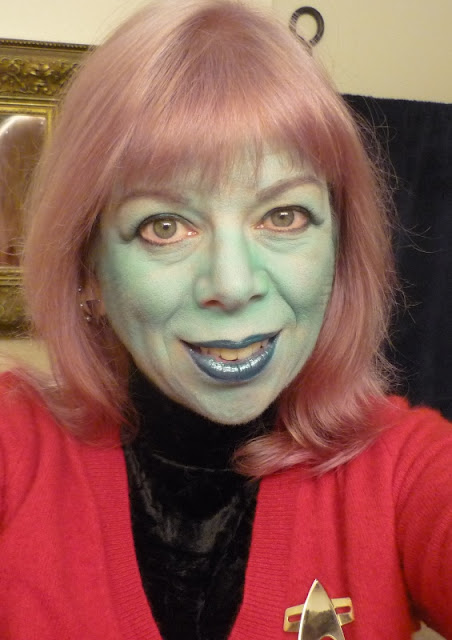 I'd resigned myself to just wearing regular make-up (but this same outfit), when I thought of trying to find a blue or aqua make-up that I could pop off my hair. Yes!

I bought this aqua cream eyeshadow (it's by NYX), the green lip cream (NYX) and mermaid scale texture stencil (Marcelle, only $1.99! and it's reuseable) at the drug store a couple of days ago. 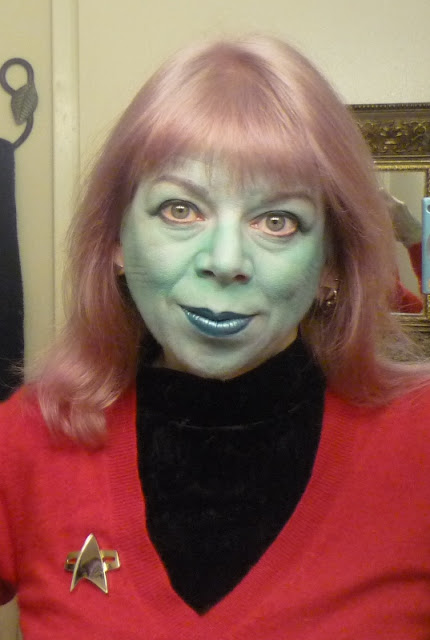 I dabbed the eyeshadow all over my face, neck and backs of my hands with a sponge, then shaded dark green eyeshadow (MAC) as "blush". 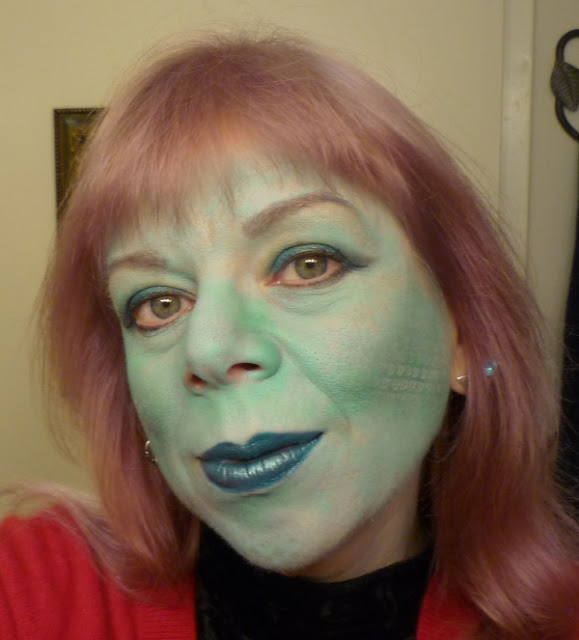 You can see a bit of the mermaid stencil there - I used a whitish-green frosted eyeshadow (MAC) over the dark green, but it didn't have enough contrast.

The eyeshadow was tough to work with - very thick and hard to spread around. I also only had 20 minutes to do my make-up (my usual allotment, interspersed with Vizzini-cuddling). No time to fuss! 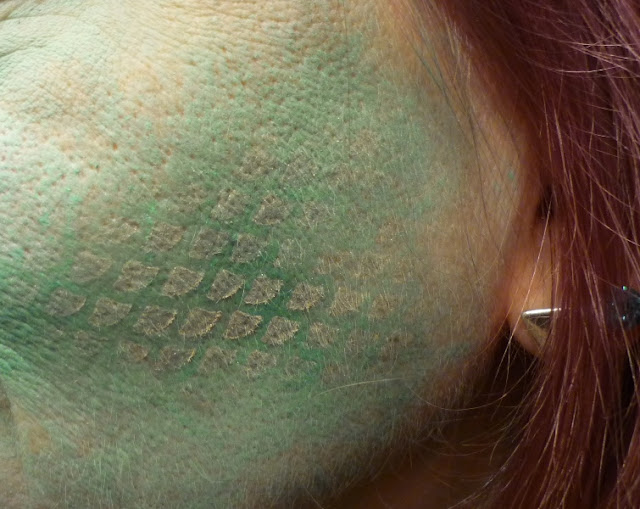 I did a test-run of my make-up last night, same as I did for my make-up in 2015 (here). I learned that this aqua shadow would stay put. In fact, it did not wash off! I tried make-up remover, micellar water, bar soap, foaming make-up remover...nothing worked. That's it, I'm green!

Olive oil finally did the trick. My face felt nice too!

This is the first and probably the last wearing of this red cashmere sweater - at least on the blog! I wear it around the house all the time. It has moth-holes (space moths! my sworn enemy!), which is why it was so cheap in the thrift store, compared to $265 retail.

But I don't care if I'm at home - there's something decadent about lounging around in moth-eaten cashmere, isn't there? At least I'm not in pajamas or sweat pants!

This is also the first wearing of this velvet long-sleeved mockneck top. Velvet and cashmere are not friends.

When I test-drove the outfit (I always do this for complicated dress-up occasions!), it was really difficult to get these pieces on! It took a lot of tweaking and fussing to get them to lay right. I took them off as a single piece, which made it much faster getting dressed this morning.

You can see a bit of the green on my hands. I did my nails purple.

Outerwear - totally not needed, and I wore the jacket open to and from work. Cashmere and velvet are warm, who knew? 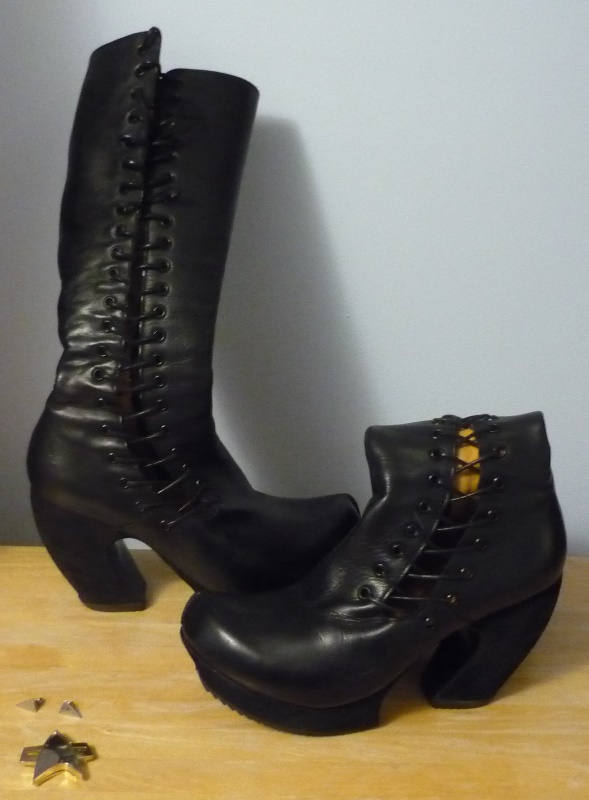 I always forget about these boots, because they have to be stored away from little kitties that like to eat laces, and of course out of sight, out of mind, oh, Sheila. They're pretty comfy, but I was on my feet all day. Tired feet. 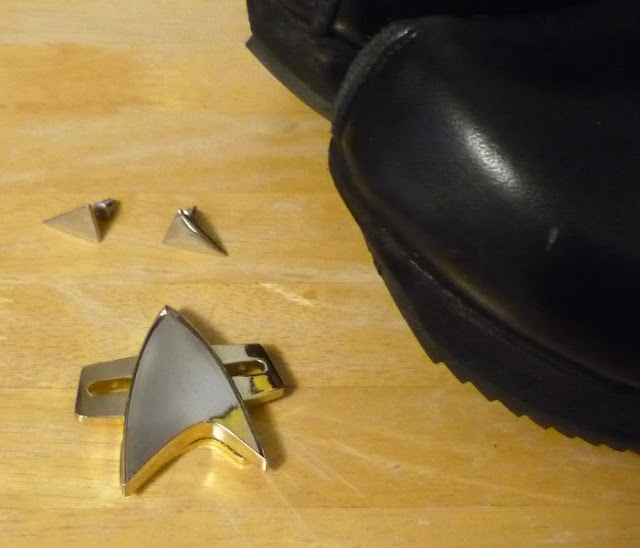 The badge that started it all.


Timing was everything this morning! L and I got up earlier than usual, as we also had to get his outfit ready. He was a Werewolf of London, from the awesome Warren Zevon song (YouTube link here, 'cause I love). We shopped for, assembled and test-drove it on the weekend, including his make-up, which is when we took these pictures.


Oh, and big paw slippers, found at the drug store.

We also have references from the song:

I did L's make-up, he grew his beard out (I darkened it with mascara).

We also did his nails with black polish (which I like, but he hates). It's all about the details.

I cropped out L's coworkers, but he's menacing a Little Red Riding Hood, who is being protected by Superman. 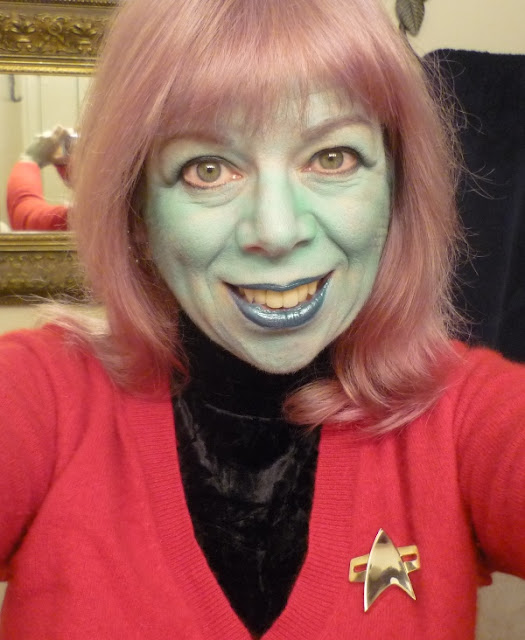 I hope yours is safe, fun and full of candy. I'll be back on Sunday with tales of adventure! Happy weekend, everyone!
Posted by Sheila at 7:23 PM