Happy Monday! I went with a simple outfit today. 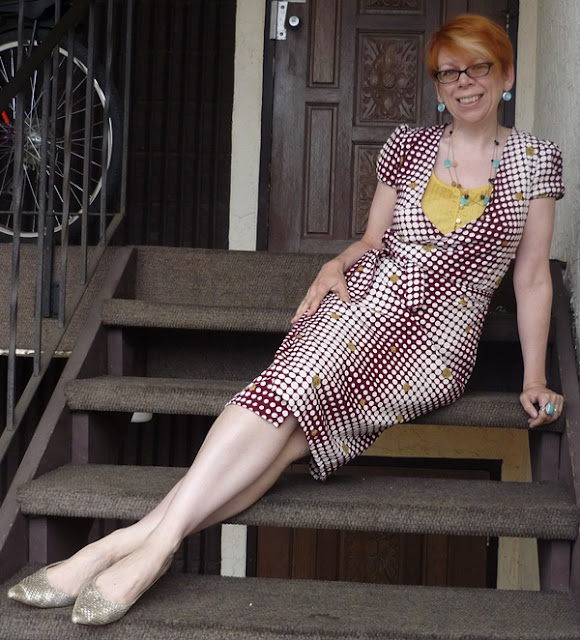 I like this dress with yellow, and I liked how the bits of turquoise popped off that and the burgundy in it. This outfit contains the same capsule items (the dress and the shoes) as this outfit (which is when I last wore the dress) but the different colours in the accessories, including a different cami, kept it from feeling like I'd already worn it.

The yellow top underneath is a layering piece that I don't wear on its own (this outfit has a picture of it solo) so doesn't count as part of the capsule.
My nice gold kitten heels (last seen here) were mandatory, as my quads are still sore from Ulty (it involves a lot of running; it's like soccer, but with a Frisbee instead of a ball). 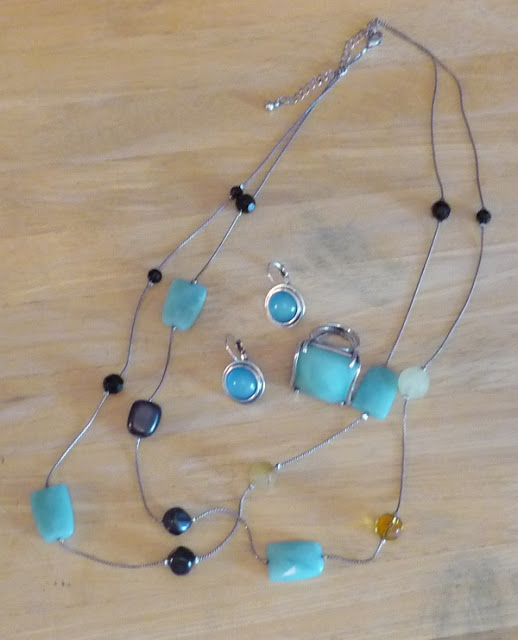 I love that pretty blue!


The fabulous Tamera of Menopausal Supermodel (she's awesome, check her out!) requested my dessert recipe from Saturday night. Here you go!


First, I made chocolate cupcakes:
That is my handwriting, and I believe I wrote that when I was 12-13 years old. I spent a few hours one day copying my favourite recipes of Mom's, including some of her super-secret family recipes. Wackie Cake, however, is not a secret! It's been around forever. I know we ate this cake in the 70s because I remember making it all the time. We always got to eat the batter.

I've doubled this recipe and made a layer cake out of it many times. It's made with no milk or eggs, so it's vegan as long as you use a vegetable oil.

The deal with it is, mix all the dry ingredients and make a happy face in it (two eyes, big smiley mouth). Put the vanilla in one eye, the vinegar in the other, and the oil in the mouth. Then you pour the hot water over the whole thing and mix it up. It goes frothy (and tastes delicious!). 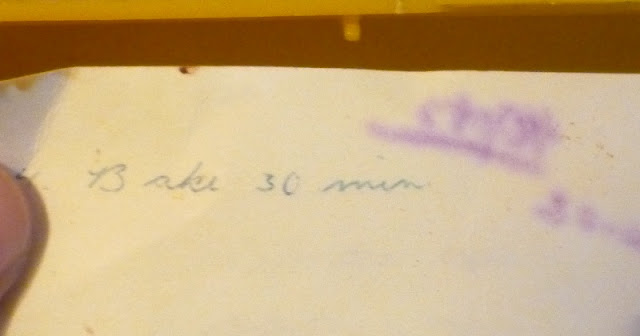 I changed up the recipe thusly: substituted 1/2 cup of white for whole wheat flour for extra fibre (the pure cocoa has a good portion of fibre too); instead of 5 tbsp of oil, I used 2 tbsp of oil and mashed up a ripe banana for the rest of the oil (saving a lot of fat). I also baked them in cupcake liners, and reduced the baking time to 20 minutes. Makes the most moist chocolate cake ever.

For the mousse, I found the recipe in this cookbook that I got for a wedding shower gift from my friend Kelly's ex-wife (they were boyfriend/girlfriend at the time). They knew I hated to cook, and they had had L and I over for dinner a couple of times. I did make one recipe out of this book way back then (that'd be around 1997), but then it sat in a drawer until I joined WW and started learning to enjoy cooking a bit more. 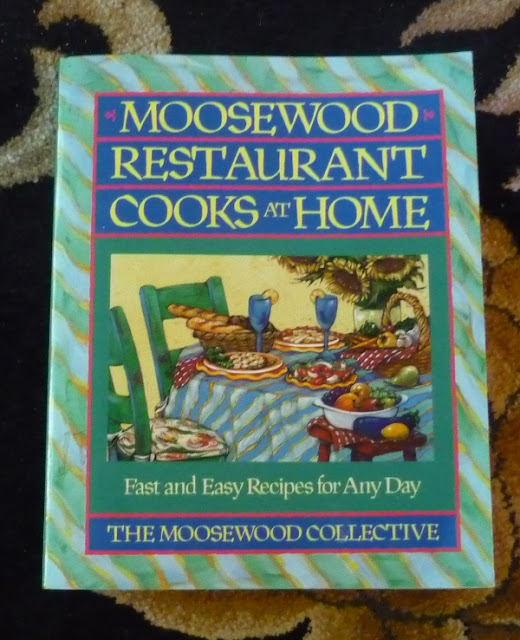 I'm still not much of a cook, but I like experimenting with new recipes once in a while. The Moosewood Restaurant is vegetarian, I believe - I have added meat to a bunch of their recipes and made some yummy meals.

The coffee ricotta mousse recipe:
I used a smallish tub (2 cups) of skim ricotta instead of full-fat. I'm not really sure what confectioner's sugar is, so I used icing sugar. The instant coffee I used was really old, ha ha. We never use it. I bought organic pure vanilla extract, and used a little more than a tablespoon of St. Remy brandy. Whirred it all up with my immersion blender (love that thing), and then popped it into a tub and refrigerated it.

For the strawberries/sauce, I bought a pint of local organic strawberries and hulled them. I used a full teaspoon of white sugar and 1/4 cup of Grand Marnier. I tubbed 1/2 of them with 1/2 of the GM and put them in the fridge; the other half got blended up with the rest of the GM with my trusty blender. 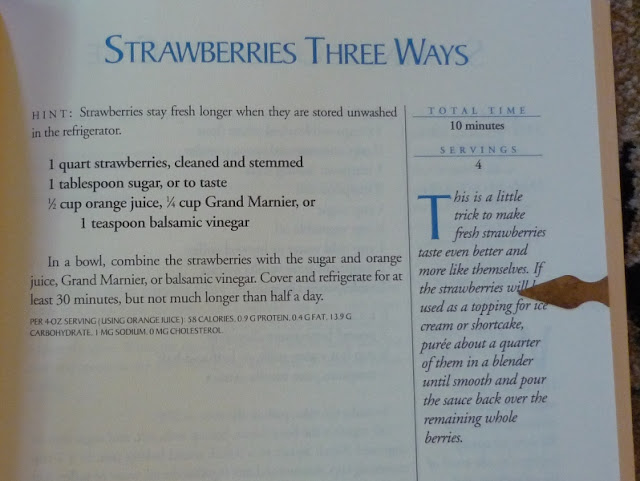 Just like they suggested in the sidebar! Reading comprehension rocks!

To serve the dessert, I peeled the paper of each cupcake and centered it on a plate. I put about 2 tbsp of the mousse on the side of the cupcake, plopped 3 of the whole strawberries in that, then drizzled the strawberry/GM sauce over it all. Dee-lish!
Posted by Sheila at 6:27 PM