Pattern-Mixing With Creamsicle and First Fluevogs in Flashback

Today's outfit did not start out like this - I had a different blouse planned, but when I got dressed, I wasn't feeling it, so this blouse is now in the giveaway pile. I didn't panic - instead, I fell back on one of my tried-and-true outfit formulas: this corset-style bustier over a shirt. 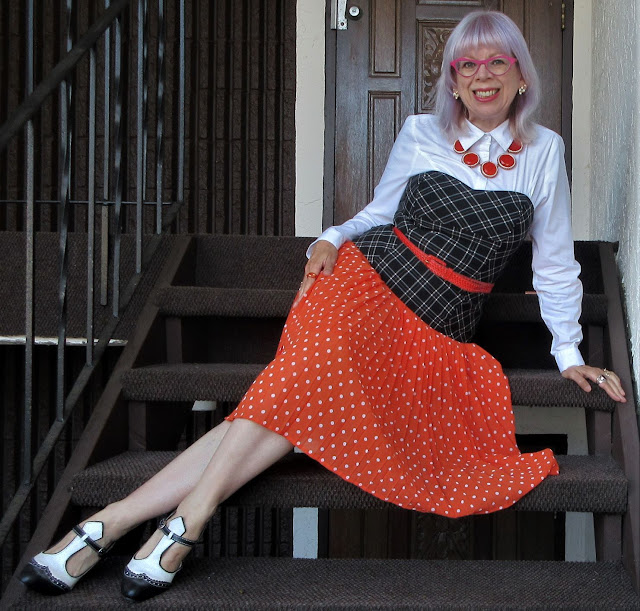 I originally built the outfit to showcase my Very First Pair of Fluevogs, and we'll be doing a Flashback of all the times I've worn them at the end of the post.
I recently saw on IFB's (that's the Independent Fashion Bloggers, link here 'cause I love) e-newsletter that corset-style tops are having a comeback. Comeback?? Like they ever left my closet! You can check out the Flashback on this bustier here, and I also have this one, and this one...these are no stranger to my wardrobe!

I do find this particular corset/bustier a bit fussy, as I'm frequently adjusting the tuck of the shirt into the chest (it wants to escape).

But it's a keeper - it's a versatile piece. This is my 20th wearing of it!
I like this low-key black and white pattern mix with the creamsicle orange of the skirt.

I felt feminine without being overly girly.
Masked up in more black and white.

My office is still "masks on," which I'm very happy about with case counts increasing as the Delta variant surges in BC. Fortunately, over 70% of our population is double-jabbed now - woo!
We're having another heat wave this week, with temps surging past 30 again, up to 32 today. 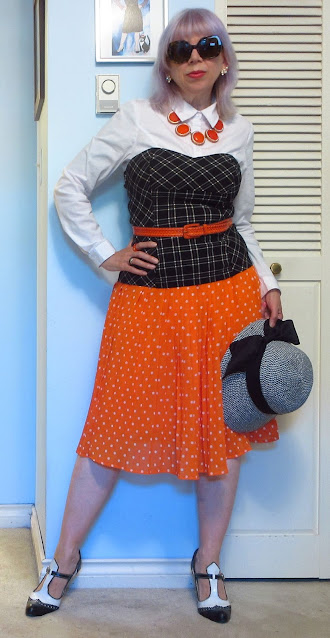 My office is nice and cool, but I'm covered up for the slow saunter home.
Mom proudly showed me her new hat yesterday - and it's just like mine. What can I say? We have good taste.

I'm ready to fan myself dramatically. Fetch me a mint julep, would you, darling?
The stuff: 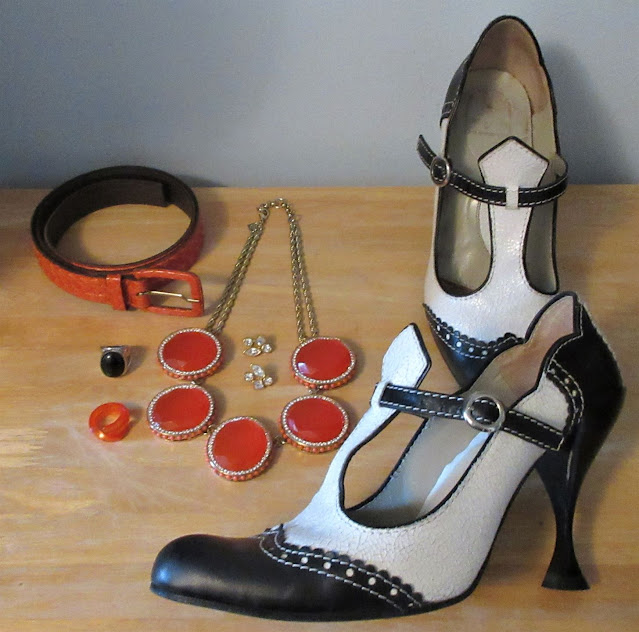 Aren't these the most beautiful shoes? I'm excited to share my outfit history of them with you. I haven't worn these to work in YEARS (that's a four-inch heel), but they were fine for the small amount of office-walking that I did today.
Orange bling: 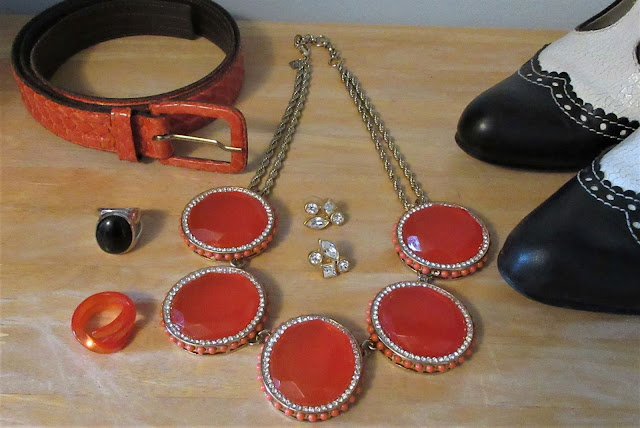 You know I had to go full matchy!
Ready for some oldies?
Flashback: Fluevog Listen Up Harlow
These beautiful shoes are are one of my very few pre-blog pairs, and I've been blogging since March 2008 - they are 15 years old. Meet the Harlow, from the Listen Up family of John Fluevog shoes. These are the shoes that turned me into a Fluevog Fan! 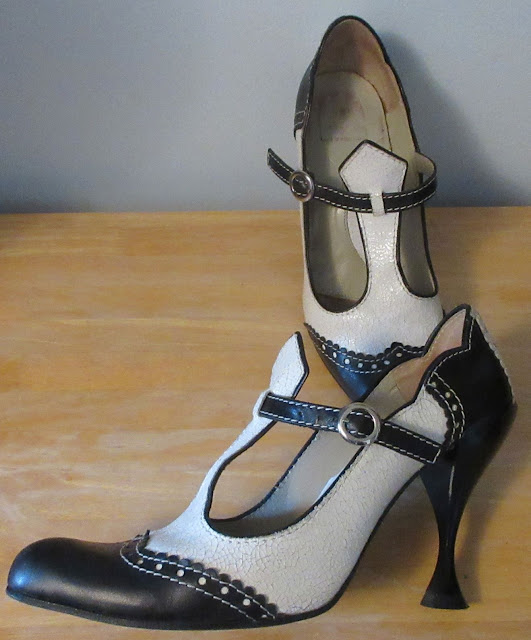 I've had them since 2006, when L and I did our first "Fluevog Pilgrimage" to Vancouver for our wedding anniversary, which we've done nearly every year since. Our tradition now is that we buy each other a pair.
L bought them for me in March 2006 at the Granville Street Fluevog store (the Gastown one did not exist yet, nor was there a store in Victoria), and I am sure they were on sale. That still would have been around $249.00, so let's go with that as an estimate. 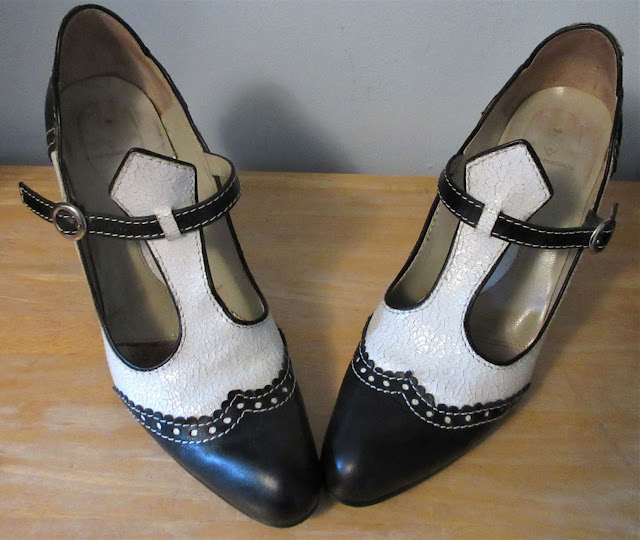 These are a bit less elaborate than many of the shoes Fluevog makes now - note the simple buckle. For fifteen-year-old shoes, they're in wonderful condition still.
I used to save these "for special," so they didn't get worn all that often until I started blogging. I featured them in my very first Shoe Shine (here; link to all of them here), a link-party that I ran for a year and then dropped (too much work). 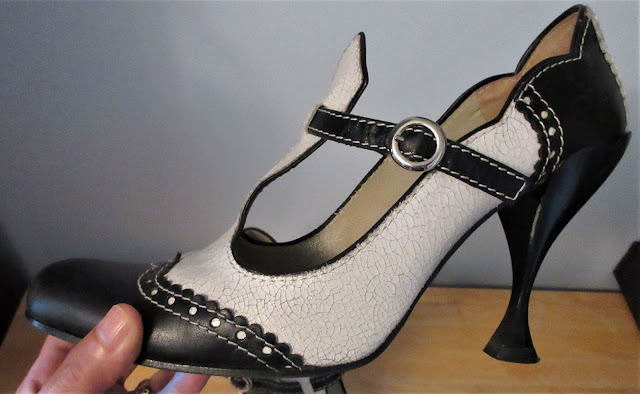 They are from the Listen Up Family of shoes, and features the "champagne cup" heel - all Listen Ups  have the same heel and general shoe shape. Fluevog issued a new Listen Up family a few years after this line was discontinued, with a different heel. I have this pair here, the O'Haras, which were the first pair in the new family...and that's also since been discontinued. My O'Haras were signed by John Fluevog (here) in person!
I used to have three other pairs of Listen Ups: the Audrey, the Mansfield (both sold through consignment here in 2015) and the Ivanna (last worn here in 2012). Four-inch heels can't stay, but I'll always have my pictures of them!
This pair is called the Harlow, after Jean Harlow. 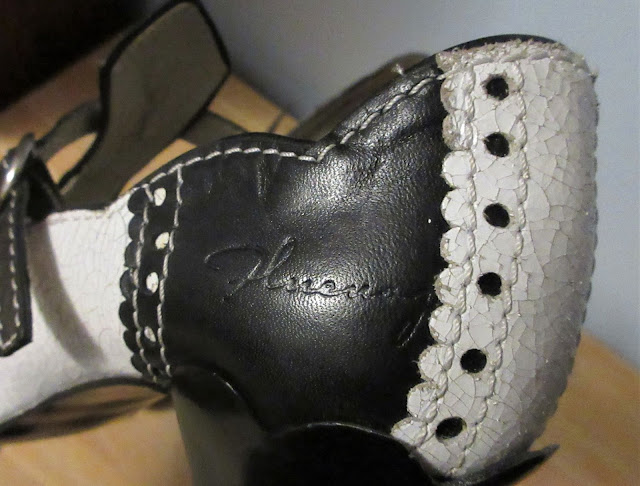 I didn't realize until today that these have an older version of John's signature: just "Fluevog", not his full signature (this one) that they use now.
These used to say "Listen to Me" on the soles. 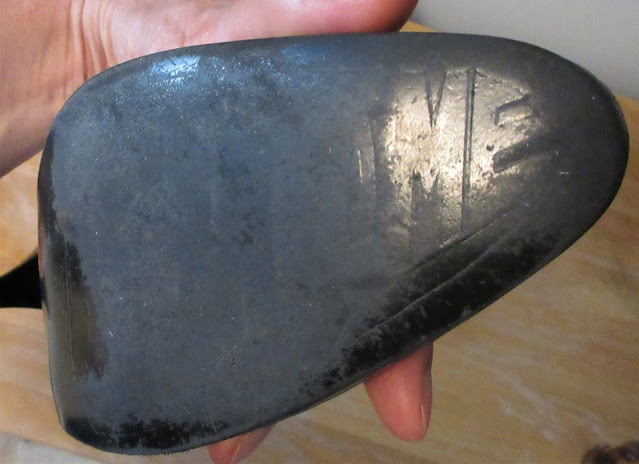 They never stay pristine.
This is one whole month into my blogging career, in April 2008. I don't know how to pose at all.

Oy, that's quite the outfit! I was deep into experimenting what fit my "new" body (I'd just lost 50 lbs the year before), and had not yet learned the lesson, "Just because it fits, doesn't mean it suits you."
These outfits now look very "of their time" to me, 12-13 years later! This was in January 2009, and we see the beginnings of my classic "leg out" pose here.

Ugh, a satin babydoll top, super not flattering on me. Black pants?? Who is this person?
And an LBD! This is in May 2009. I still have that floral brooch.

I had red hair for a long time - I dyed it that colour from the mid-90s until about 6 years ago.
I thought this look was quite "out there" at the time, but it looks so dull to me now.

This is in August 2009. I still have that belt and my pearl jewelry (most of that is from the 80s). Nearly everything else in this Flashback is long gone.
October 2009, and as you can see, my love affair with velvet blazers has been a life-long one.

I was afraid to match these shoes to anything other than black, hence the large proportion of black in these outfits.
April 2010, still looking rather boring. I'd forgotten all about that sweater.

As you can see from all these trouser pictures, I was a fan and early adopter of wide-legged pants.
I've always loved yellow - I wore this thrifted cashmere sweater to death. 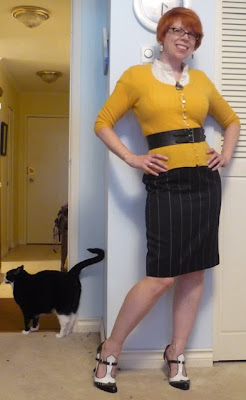 This is from September 2010, and that's Inigo kitty! He was such a lovey boy.
I was also very heavily into "tulip" skirts, which are making a comeback. This outfit is from February 2011.

I was really into belting my sweaters then.
I remember wearing this to my Weight Watchers job in April 2011.

I really liked that skirt, but the pattern didn't line up symmetrically.
Ooh, this is a really early Stair Picture, from August 2011. 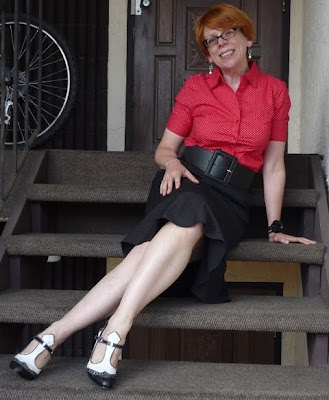 I haven't quite worked out the corner-to-corner logistics of the pose, but it's close - it has taken me years to get it right every time.
November 2011 and a better Stair Pose, although it's not quite there - I do more of a sprawl across the stairs now, to really stretch my legs out and make them look longer. 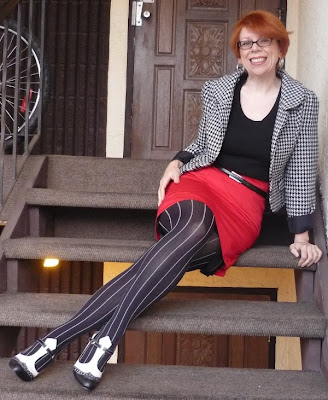 I loved those tights, which I had for well over a decade.
In June 2012, I featured these shoes in my month long capsule, as part of my "30 For 30 For 12" year-long wardrobe challenge. June was a neutral month.

This challenge helped me hone my style and be pickier about my shopping. I still have that leather cuff.
Another June 2012 outfit - and I thought this was Highly Adventurous.

Recognize the bustier? The little socklets with the shoes really pushed my boundaries. So daring!
I realized around this time that these shoes were way to high for daily wear, and moved them into my "archives" (I display them in my closet up high). When I joined the Traveling Yellow Skirt Freakshow (link to my original post here), of course I had to incorporate them into my steampunk look. 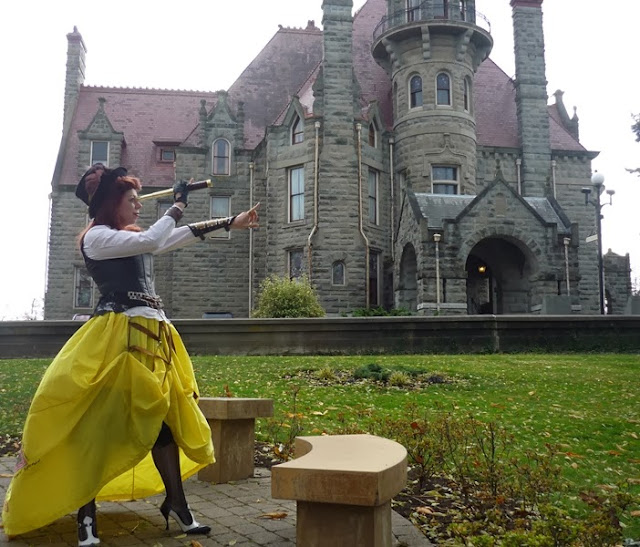 "Hark, I see a castle!"
This was in November 2013, and was the first time I did a photo-shoot out in public. They're still pretty rare for me.
I didn't pull the shoes out again for five years, when I wore them to work here in January 2018.

That's a Kenzo jacket I gave to Cat, and my original Andre Courreges wool skirt (thrifted for $5.00!). I'll have to do a Flashback on that one day (if I can still get into it).
Mathy stuff: This is my 16th recorded wearing - I probably wore these shoes 4 or 5 times prior to the blog, between 2006 and 2008. We'll go with 16 for now, though, which brings us to a cost-per-wear of $9.31. Not bad!
This heel (3.5") is just a bit too high for regular wear nowadays, but seeing all these outfits, I realize I still have some outfit potential before I fully retire them. As my original pair of 'Vogs, I'll never get rid of these! Maybe I need to display them properly...
Do you have shoes over a decade old? Do you keep any of your favourite things in a personal archive?
Posted by Sheila at 6:13 PM