Hello, my friends! I've had a very quiet weekend here, and have just one outfit to share. We played Ultimate Frisbee on Saturday morning, followed by brunch, but I played and brunched in my workout gear, so no photos of that.
Post-Ulti, I got dressed in a very casual (for me) outfit, and L and I quickly dashed out for some gaming sustenance (chocolate, gummies and chips) for Cat and Ross' arrival that evening. We played a rousing game of Arkham Horror and laughed ourselves silly into the wee hours.

We'll be having a Flashback on this pre-blog dress that I've had since 2007. 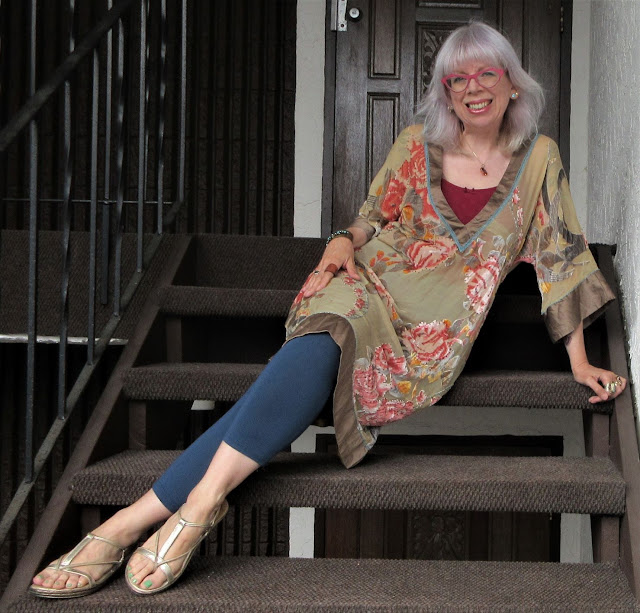 I never wear leggings except around the house, so this is a first!
But I was so stiff and sore from two hours of running - I could not face "real" clothes!

I even had an afternoon nap in this. The leggings are a much more muted teal than they look here.
Vizzini always has to get in on the action. 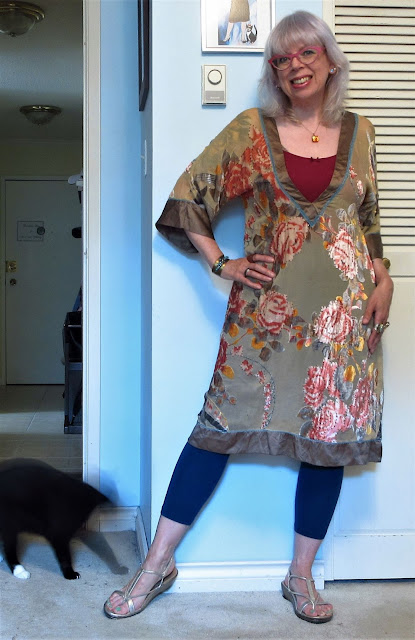 It's one of the most beautiful textiles I own.
Incognito in my shades, in case I ran into anyone I knew.

I didn't. Phew! I have a reputation to uphold!
Masked up for a foray into London Drugs - along with our evening treats, I picked up more solar lights/lanterns for our deck, since they were on final season clearance.

I hung out in this outfit in the evening - it's a little dressier than what I'd normally lounge around in.
Mask - CuverUp
The stuff: 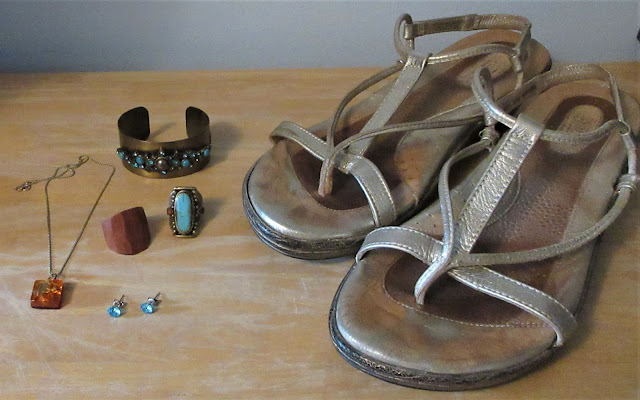 My shoes need re-heeling, so I'll be taking them to the cobbler this week. I considered turfing them, but they are such good quality, that I think new heels will give them years more use.
Flashback: Hale Bob Silk Velvet Kimono Dress
I bought this dress in New York City in May 2007, when Mom and I did a trip there together. We stayed in a tiny little hotel just off Times Square, and we walked all over the city. Y'all will excuse my indulgence in sharing a few pictures from our trip that actually have us in them. These are pictures of actual print photographs; Mom made me up a little photo album after the trip. Neither of us owned a digital camera back then! 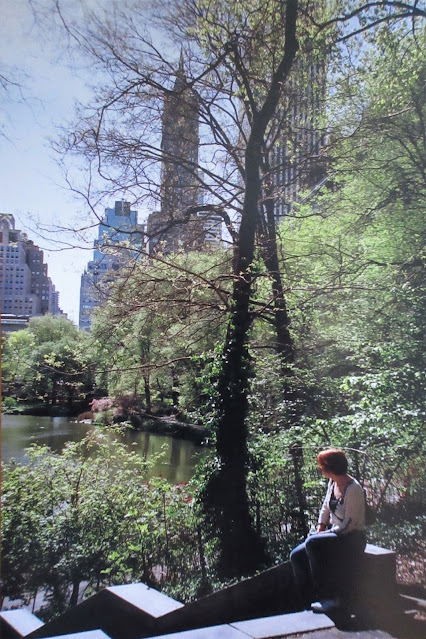 Me in Central Park. I was near the end of my weight loss journey (doing Weight Watchers maintenance while I was in New York). I'm 39 years old here, as this is 15 years ago.
Mom on the Brooklyn Bridge - we walked over it and back so we could say we'd been to Brooklyn. 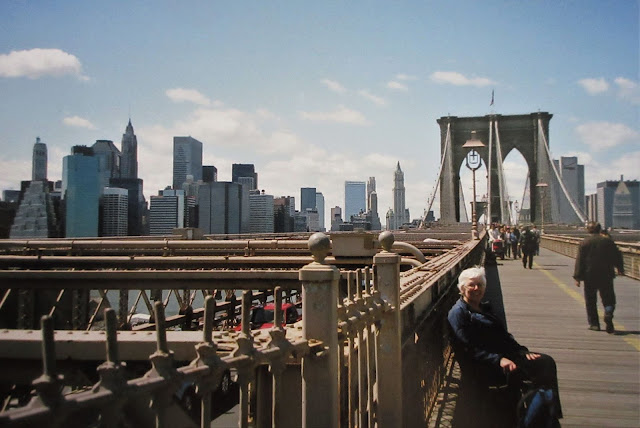 We also did the (free) Staten Island Ferry there and back, so we touched three boroughs.
Mom and Dad's song was "Moon River" from the movie Breakfast at Tiffany's, which is still my favourite movie. 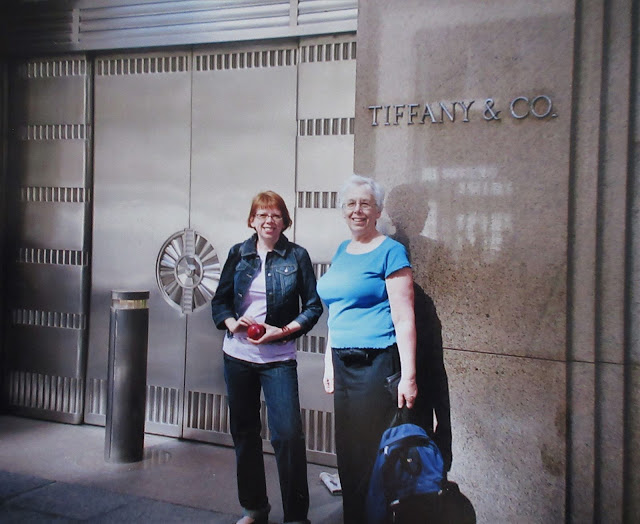 I have an apple in my hand from the complimentary breakfast buffet at our hotel. Get it? I have breakfast...at Tiffany's! Unfortunately, it was too early in the morning and Tiffany's was not yet open.
Mom and I at the Empire State Building viewing platform. Hey, those are the earrings Mom just gave me! 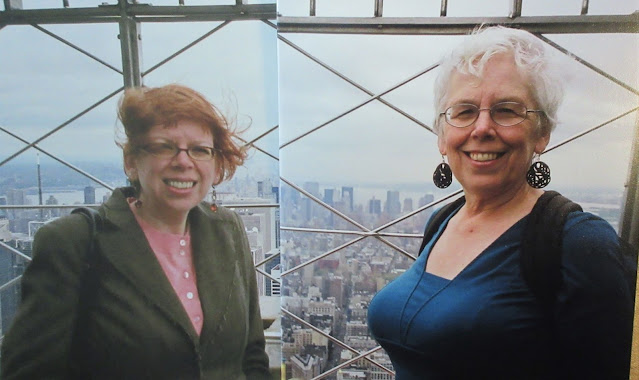 Mom was just fitted for a new bra at Victoria's Secret and is looking rather "yowza!" here, hee hee. I had to fold one of the photographs in half to put us together in the picture.
While I was in NYC, I did tons of clothing shopping - this was my first binge of buying clothes for my new, 50lbs smaller body. My jean jacket in the above pic was purchased from Ann Taylor Loft and lasted the second-longest of almost everything I bought while I was there; I got rid of it only 3 years ago. I had quite a bit from Loft and from Filene's Basement - I wasn't as heavily into second-hand clothing pre-blog, so I didn't go to any vintage stores (a missed opportunity, and reason to go back!).
We also visited the famous department store Century 21 while we were there, and I bought this dress for $49.95, I think. I tried it on in the aisle as there was a huge line for the fitting rooms. 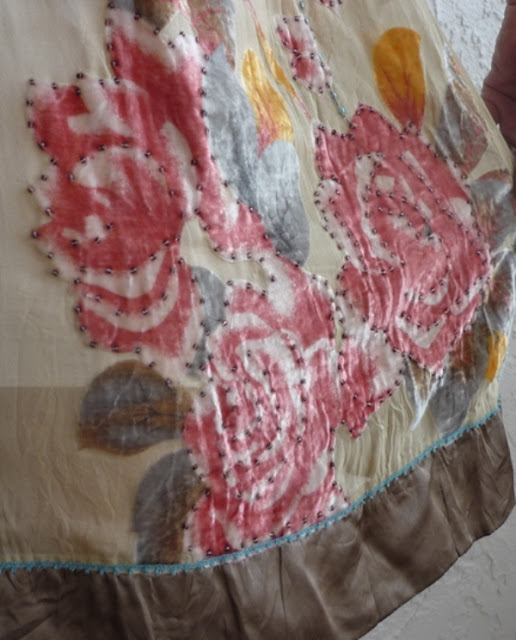 I fell in love with the beautiful fabric.
I took these pictures a few years back to show the beadwork. 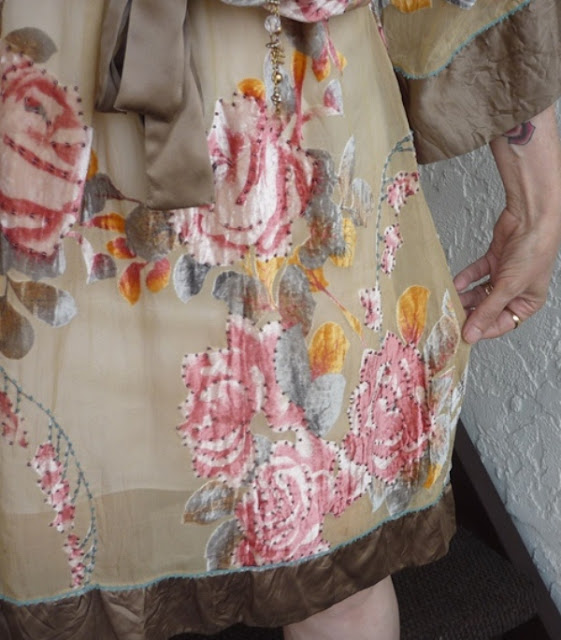 I had another dress by Hale Bob that I bought at the same time:

That's from July 2010. It was a lovely dress, but too frou-frou for me, so I eventually gave it away.

This isn't a cheap line - this dress would have been around $200-300 at full retail.
I didn't wear it for two full years after buying it because I couldn't figure out how to style it! Imagine! I threw this together quickly in April 2009, as I rushed to make it to town for a lunch date I'd totally forgotten about.

I wore just a tank top under it, and a pair of full-coverage granny-panties (very Bridget Jones!), and thank goodness I did, as this was when I first realized: the dress is completely see-through!
Including a couple of pics of us - it was Caro's birthday celebration. 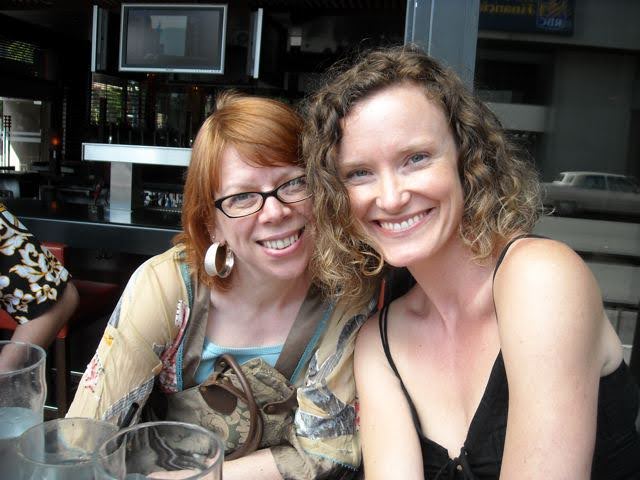 We hung out at Cactus Club for the afternoon. I can tell L showed up, as that's his Boston Bruins Hawaiian shirt on the side above.
Caro, Cat, Vero and me - the original Core Four Winesday gals. 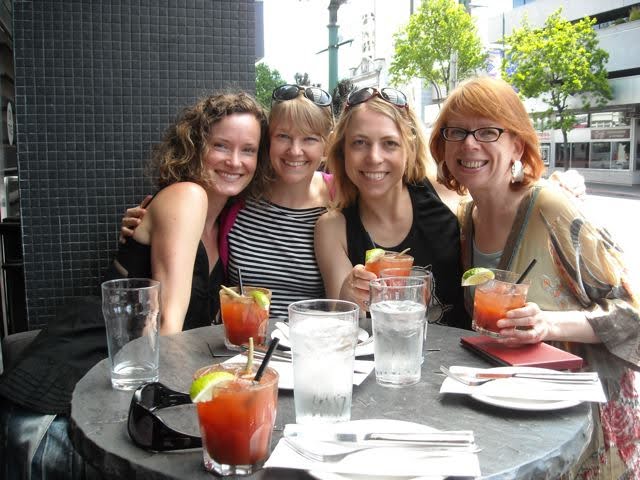 Looks like it was an afternoon for boozy Caesars!
This is from July 2010. The dress originally had a silk sash threaded under the bustline, but that's not a style that suits me and it pulled the shoulders of the dress down.

Eventually, you'll see the sash go missing...
This was my travel outfit in March 2013, when L and I went to Vancouver for our anniversary trip.

I'm a blonde! And wearing my favourite "tux" pants and loafers.
This was the very first time we met up with Melanie of A Bag and a Beret. 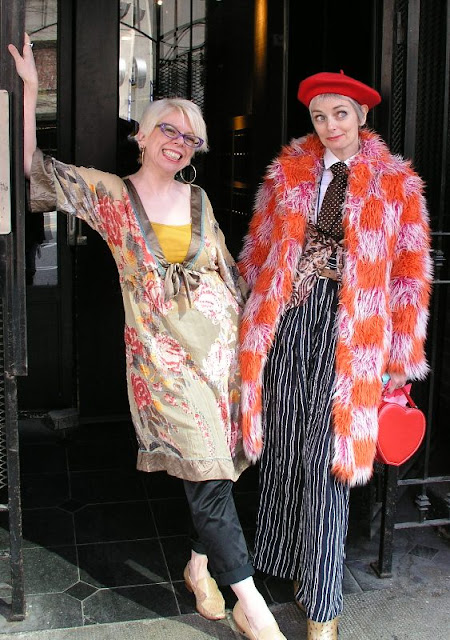 We did a lot of posing, and being silly. We totally hit it off, and have gotten together with Mel every time we've gone over since.
A more serious try at a proper outfit with this dress, in June 2013. 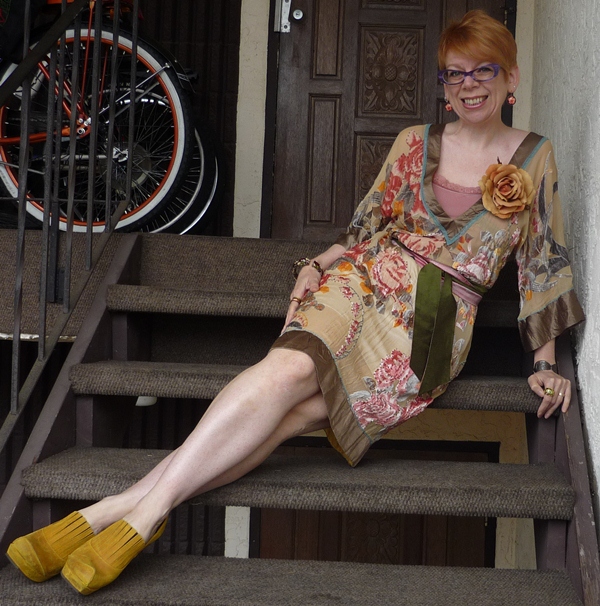 I wore this to an art exhibit that Elaine was featured in. I've taken the under-boob sash out here and belted the dress with one of my Smoking Lily obis.
I am pretty sure I wore this to the Ulti field in August 2014.

Just wearing a full vintage slip under it. My hair is shaved on the sides, revealing the horrifying truth: I'm grey!
Another stab at wearing it - this time with long white denim shorts.

Oh, and I'm wearing clogs! I forgot I'd even owned those. Mom and I did some Zentangle in Beacon Hill Park this day in June 2015.
Somewhere in this period, I gave the dress away to Caro - she wore it for a while, then gave it back.

I think this was the only time I've worn it for work, in August 2017, layered with a white sweater and my white floofy underskirt. I think this is one of the best stylings I've done with this dress.
This is another Ulti outfit (the dress is easy to slip off over my head), from August 2018.

Same shoes as the current outfit, and just using the sash as a belt.
And here's the last time I wore it, in July 2019.

Just a half-slip and a tank/cami under it.
Mathy stuff: I've worn it 10 times in 15 years (plus assorted wearings by Carolyn), which is only $5.00 per wear, but I'm okay with that, as it's a tricky item to style. I'm definitely keeping it, as a memento from the trip to NYC with Mom as well.
However, I think this dress is really not my current style, and I have an idea. What if I cut it straight down the front, and used the sash to edge it? That would make it into a kimono-style topper - I think I would get more wear out of it if I could layer over a more "me" outfit. What do you think? Have you ever cut a dress up to make it more wearable? I know some of you are handy that way!
I'm going to leave you with a couple of cat pictures. Here's Vizzini snoozing in the last of the evening sun on the deck. 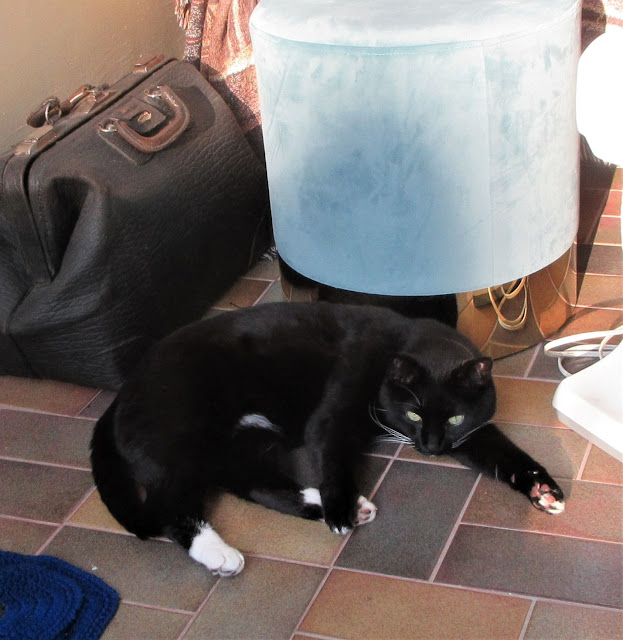 "Yes, you should definitely disturb me."
He dozed until Cat and Ross came over, then lurked around waiting for us to drop crumbs on the floor for him to hoover up.
Vizzini, you must behave yourself when we have guests! 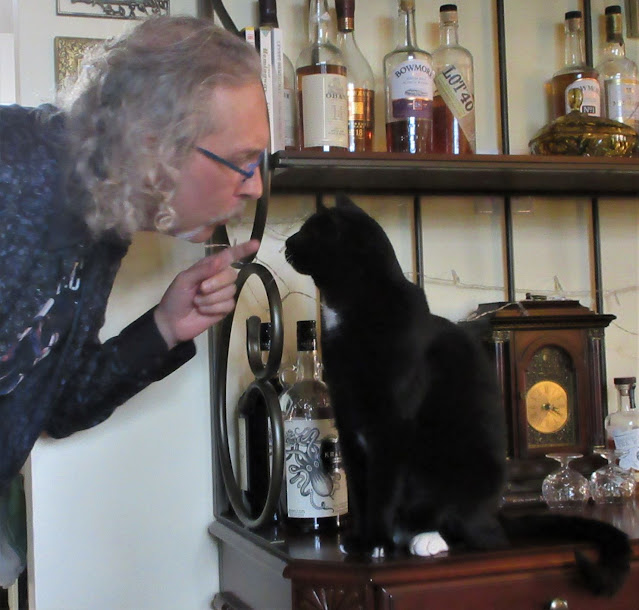 "All I smell is tuna on your breath, Man."
I hope you all had a lovely, relaxing weekend! Thanks so much for stopping by!
Posted by Sheila at 1:02 PM