Woo! Happy long weekend! I'm so thrilled to see so many of you dressed up and in your finery for my birthday party tonight! There's still plenty of time - I'll be out all day tomorrow with my niece and won't be doing the party dress round-up until Sun/Mon.

Please join me: Break Out Your Party Dress!

Please put on your best outfit, and send me a link or a picture no later than end of day Sunday, and I'll do a round-up after I've recovered from the party (heh). I want to see sparkles! Pretty shoes! Anything you think might be a bit too crazy? Not for my party!

Apparently, Saturday is Plaidurday! I didn't get the memo and wore my plaid on Friday. 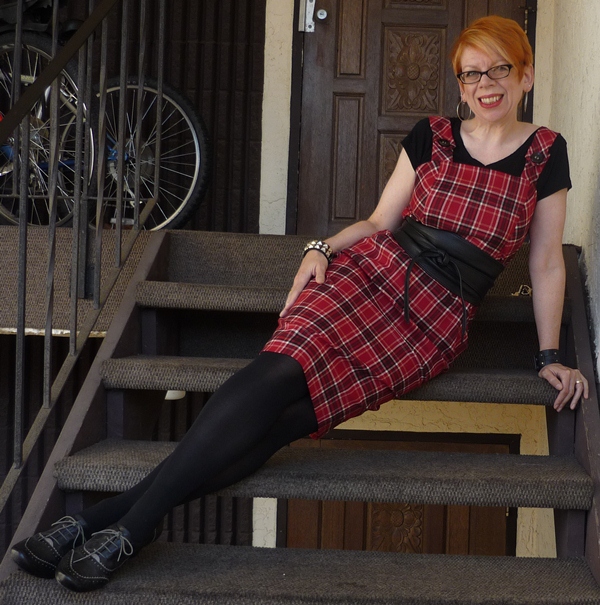 L and I went for brunch and then I went to Motor Vehicles to renew my government ID (I don't have a driver's license). Had to make sure my picture turned out well, so laid on the make-up, ha! Red lips!

This is my plaid dress that I bought when Plum shut down in February 2011 for $25.00. I first wore it here, with just simple black accessories. I've also previously worn it here in April 2011 (layered with a black wrap so that it looks like a skirt; ugh, bad stair pose)...and I can't find any other instances of wearing it! Which is shameful, as it's such a cool dress.

I'm just wearing a black graphic tee under this (not part of the capsule), with my black leather obi as belt.
The shoes are new-to-me, and are by Marc Softwalk. I got them back in June this year at Value Village for $19.99 - brand new! That's probably about 10% of what they would sell for new. They were awesome for walking - super comfy.

I wore my jean jacket for walking around.

My silver hoop earrings and my two leather cuffs were my only other adornment.

Today, L and I went for brunch again (it's Birthday Weekend! we even had special coffees, yum yum). I decided to go pirate-y. 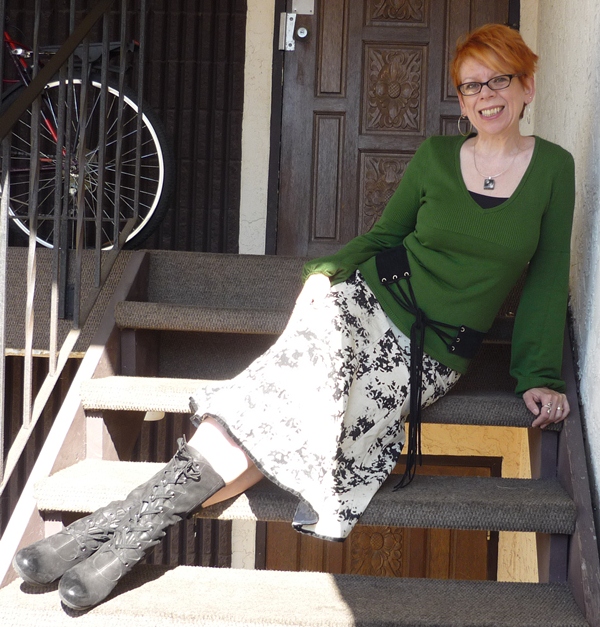 I may have slept in after my bottle of wine last night...the sun is all glarey on me (give me coffee, stat!). And my hair went all crazy-ass this morning.

To drink, I have red and white wine, beer, all the hard liquors, a bunch of random liqueurs (including absinthe for the adventurous), and all are welcome to sample some of my single malt scotches.

Anyway, back to clothes! This is my green bell-sleeved sweater. I got it at Winners ages ago. I think the first wear of it is here in October 2008 (making it 4 years old! wow!). Those shoes were way too tight.

The skirt is a little newer - it's by J.J.F. and I think I paid around $30 for it on consignment. It's a heavy cotton, almost a denim, and the hem is black velvet. I got it probably in late August 2011, and first wore it here in September 2011 for my debut at my current office. The only time since then that I've worn it is here in January 2012, with an awesome suede jacket that I need to wear again soon!

The boots were last worn here.

It was really warm today, so I just threw on my skull scarf and cross-body bag.

Expression due to hearing Vizzini barfing and L yelling for paper towels. Ick!

Gotta go clean up for the party and get the food prepped! Can't wait to see all the party clothes!
Posted by Sheila at 4:29 PM