It's definitely autumn now! It's very chilly in the mornings (gloves are required) and I'm really happy that I've put so much tweed and thick clothing into this month's capsule. 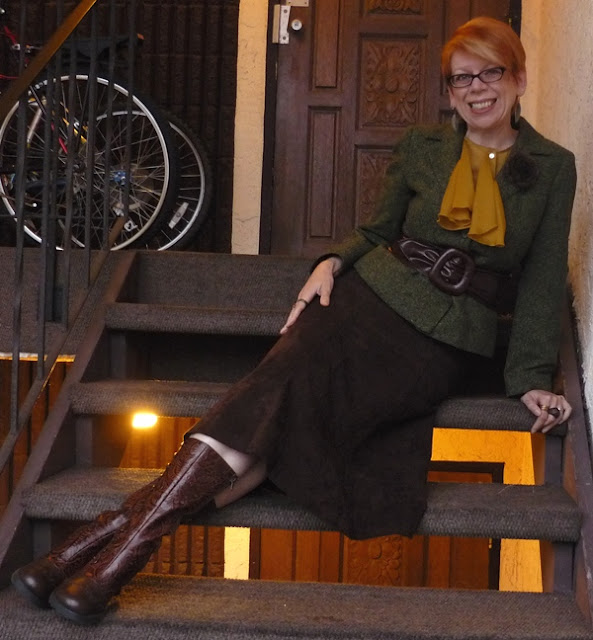 I've been very lax this week with actually planning out my outfits the night before; normally, I would have everything ready for getting dressed in the morning, right down to the last detail of accessories. This week, I've had a top, a bottom and a shoe ready. I'm actually surprised that so many of these outfits are working!

Anyway, this is my green tweed jacket that matches the green tweed skirt that I wore here for my birthday. I took the faux fur collar off for this outfit. As mentioned with the history of the skirt, I've had this suit for several years - it was part of my big shop after I'd lost 50 lbs. It's a silk and wool blend and it's by Precis Petite. I think I paid around $125 for the jacket, marked down from close to $400. Considering I've had it since 2007, I think that's been a good investment.

I first wore the jacket on the blog for my birthday (with the matching skirt) in October 2008. I've also worn it in here in December 2008 (with boots that I recall smelled really bad - no more vinyl boots!), December 2009 (with some killer shoes that I no longer have), here in November 2010 (ooh, I still have every piece of that outfit), and the last time twice in February 2011 (with a menswear-inspired look). I haven't gotten too much wear out of it, as it's only wearable in cold weather, so I'm glad to be giving it a good airing this month.

The mustard blouse is turning out to be a salad dressing magnet! It's soaking in the sink to get the oil out of the ruffles at the front. I last wore it here.

The brown A-line skirt is fresh this month! It's by Liz Claiborne (I have a tendency to mix that up with Jones New York) and is a lovely thick ultrasuede. I thrifted it at the Hospice store for about $7.00, probably in December 2009, since my first wearing of it was here in January 2010 (I vividly remember what a pain it was to try on clothes while wearing that outfit!).

It's been previously worn in October 2010 (in an Annie Hall-ish ensemble), November 2010 (with my green bell-sleeved sweater that's in this month's capsule, hmmm, I'm so original), in February 2011 (with this month's mustard sweater; again, F for originality!), in November 2011 for a casual day shopping, and I last wore it here in December 2011 (with yesterday's plaid jacket). It's also strictly a cold-weather skirt, but it's great for layering.

I didn't wear any tights today due to the thickness of the skirt and the high-ish boots, my wonderful Fluevog Babycakes Minis (last worn here, scroll way down past my b-day party dress pals).

Vizzini helped me photograph the stuff: 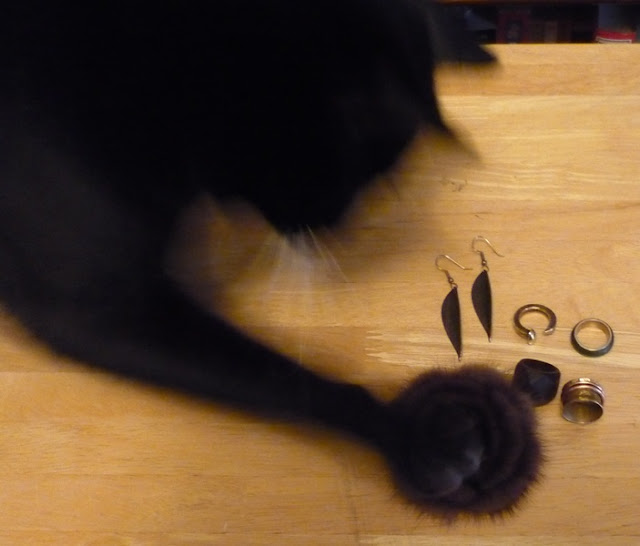 He really desires the mink rose; he keeps trying to eat it. I have to store it up high where he can't reach it. 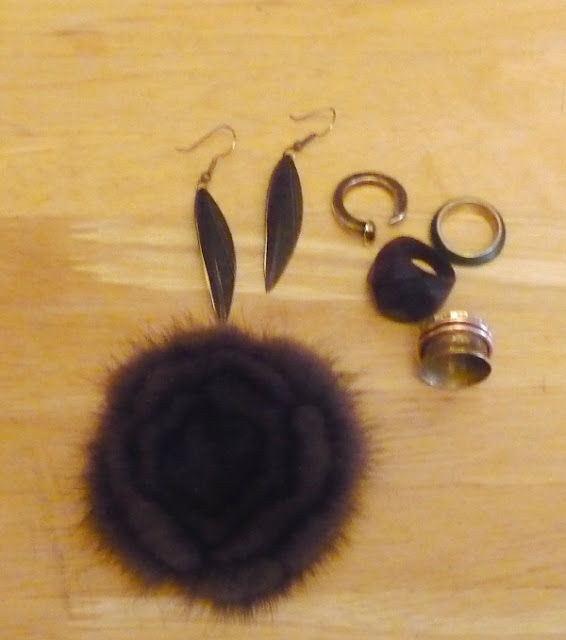 I went to say goodbye to Vizzini this morning (what? You don't say goodbye to your pets?), and found him in a curious position:
A normal cat would sit on the chair. Not Vizzini (check out his past odd sitting here, scroll down).

He seems to know I'm mocking him.
Silly cat, you already attack my feet every morning!
Posted by Sheila at 6:27 PM