Weekend Stuff and a Book Blurb

It's been a tiring weekend, and all I want to do is nap.

What I wore to Weight Watchers:

Arms akimo, Wonder Woman! Best news I'd had all week: I only gained 0.2 pounds over the last two weeks!

We had an exhausting game of 4 on 4 Ultimate on Saturday, after which I napped, then went to Winesday. Thank you, Marian, for firing up the hot tub! I really needed that soak.

I wore various bits and pieces of this outfit over the course of the evening, but back to this for the cab ride home late last night. 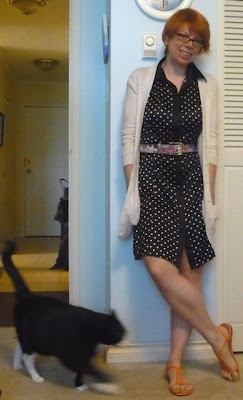 Inigo waltzed into this - I didn't even know he was there until I felt him brush my leg after the camera went off. Silly kitty!

I finished a book earlier this week: Stephen King's "Under the Dome": 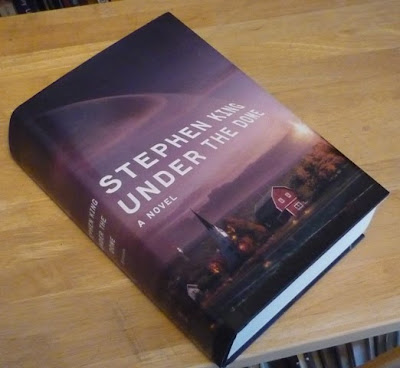 I'm not ashamed to admit that I'm a big fan of Stephen King. I used to buy his books for my Dad for birthdays and Father's Day. Dad was dyslexic, so he struggled to read entire books, but he got hooked on the plots of Stephen King novels so they were easier for him. And once he finished with them, they came back to me. Many of my King books say things like, "Happy Birthday, Dad, love, She" inside them. I have nearly every book he's written.

Stats: 1000+ pages of interesting characters getting up to no good shennanigans. Started August 8th, finished August 17th. I toted this massive lug of a hardcover up-Island and back.

Blurb: As I said, I've been a fan of Stephen King's for ages (since at least the early 80s). I have a new hardcover original of "'Salem's Lot". I expect complicated interrelationships, gory deaths, and seeing what happens to his characters (literally dozens of them in this one) when something unexpected happens to them. Like, oh, say, a dome pops up around a small town in Maine and the bizarre stuff that ensues.

If you like Stephen King, you'll like this one. It's much like "Lord of the Flies" in that it puts people in a closed environment and then sees what they do. I'd say it's in the top half of his books, but closer to the bottom of the top half, if you know what I mean. If you don't like Stephen King, don't bother.
Posted by Sheila at 4:32 PM