I'm off for a couple of days, so I'll catch up on some of the non-fashion stuff...today's entry will be some books that I've read.

Not that books are the focus of this blog, but in case anyone's wondered why I'm not apparently reading much (the last blurb I did was in mid-July), it's because I read multiple books at a time sometimes. Right now, I'm concurrently reading two books of non-fiction: one is a bunch of essays/newspaper columns (it's what I read when I want to fall asleep fast, hee hee), and one is my bathroom book (i.e. slow reading. Perhaps that's TMI, sorry).

At the same time as the slower reads, I am also reading my usual stuff: trashy fiction and graphic novels, and a couple of comic books.

First up: The Order of the Stick: The Origin of PCs:

(my apologies for linking to the pictures, Mr. Burlew, I had to give these back and forgot to take a picture).
I am a dedicated and loyal reader of the online comic The Order of the Stick. I highly recommend it if you are into role-playing games (it's full of in-jokes) - it's hilarious. I have finally caught up and read the entire series, and now join the legion of readers who compusively check the website every day to see if Rich Burlew has posted a new comic.

Anyway, there are a couple of supplementary tales to the series that can only be purchased in actual book form, this being one of them. It's more of the same of the comic, but this is the origin story of how the adventuring party came together. Awesomeness.

And just as entertaining as the "good guys" is the origin tale of the bad guys, The Order of the Stick: The Start of Darkness:

Freakin' geeky awesomeness! Thanks for the loan of these, Kelly! I highly recommend these. I wish there were more to buy.

This morning, I read "Incognito" by Ed Brubaker and Sean Phillips. They also collaborated on the "Criminal" series, which I really liked (I own it).

And yesterday, I finished another Kim Harrison book. I've realized that I really, really like this series. I should never have given away the first one - I'm going to have to buy it again second-hand. 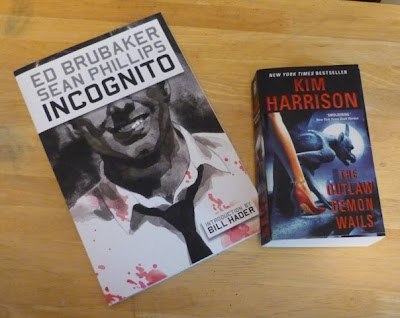 It was another solid entry in the series. I'm totally hooked on them - there are two more that I need to get!

Not sure what fiction I'll dig into next, but I'll have some solid reading time while we're up visiting L's folks (ferry ride, hopefully some slack time in the backyard in the sun).
Posted by Sheila at 5:00 PM

Comments are so incredibly special, and I love them and hug them and treasure them forever. Please feel free to tell me what you think! I try to respond to every one, so check back.

Please note that comments containing affiliate links to shady sites, spam comments and anything I deem inappropriate will be deleted.