My first few weeks of my spring wardrobe can be a little overwhelming - there's almost too much to choose from! 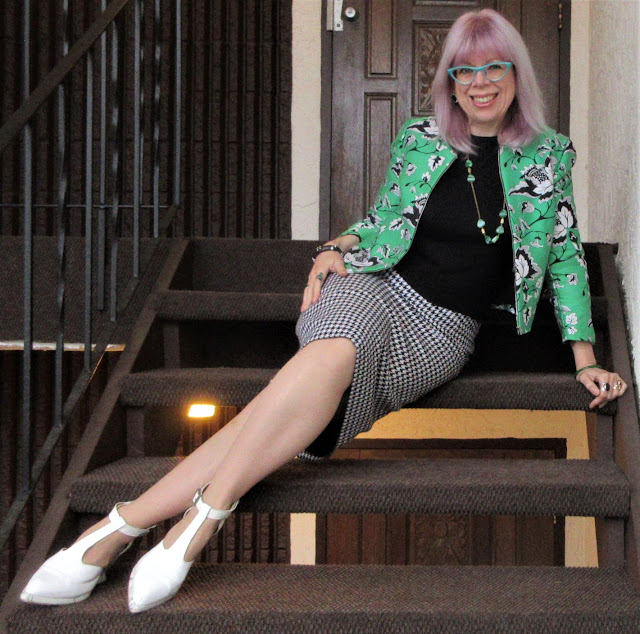 Such a terrible dilemma, right? I alleviate it by incorporating my new-to-me items into outfits right away, like this lovely green patterned bomber jacket.
You may be having some deja vu - yes, it's another houndstooth skirt! This is a very old one in my wardrobe - I've had it nearly the entire time I've been blogging, which is coming up on 13 years. 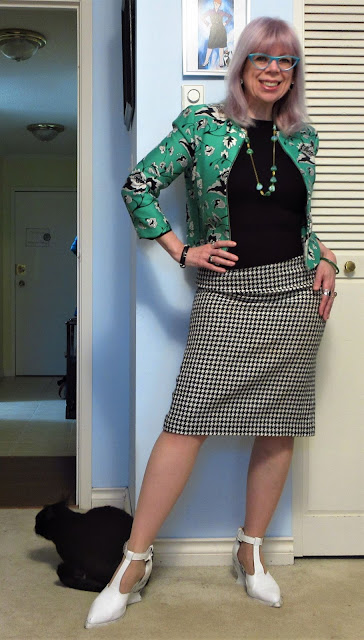 "Not impressed. I can't believe you're leaving me."
Vizzini was super-cranky with us this morning, meowing and trying to get us to stay home with him.
Anyway, this is my old houndstooth pencil skirt, and it's made the cut through many a cull in my closet. We'll be taking a Flashback look at all the ways I've worn it in a bit.

Oops, I didn't line my seams up! That back slit should be centered. I've always liked how flattering my back view is in this skirt.
I loved how the two patterns went together. Houndstooth is a classic for mixing with other designs, especially if the second pattern also has back and white in it.

This outfit would have been WAY too adventurous for me back in my early blogging days! I was scared to try new things - pattern-mixing was way too, "Whoa! Other people! Not me!"
Masked up - and how things have changed. There's another pattern right there in my mask!

The jacket zips up, but I probably wouldn't wear it like that - this was just for my walk to and from work today.
Outerwear - oh, I'm Klassy today, folks. It's been very windy and rainy all day, so I couldn't wear one of my fedoras (I don't fancy chasing my hat in traffic).

Instead, I did the Movie-Star-Wrap and secured my hair with my silk scarf. It poured on me on the way home, and I was shocked that my hair stayed dry! This actually works!
Outerwear stuff: 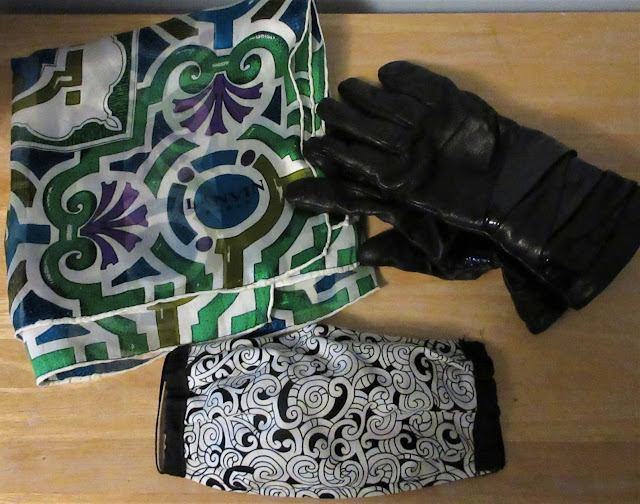 I love wearing a swanky designer scarf in the rain.
The stuff: 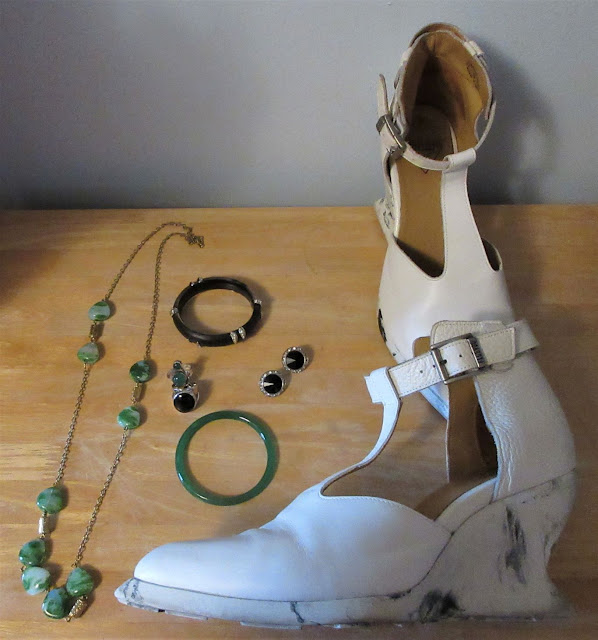 I'd planned on a pair of black and white shoes with this outfit, but then changed my mind last night and went with these chunky wedges. They are insanely comfortable, not that I did much standing/walking in them today.
Green and black bling: 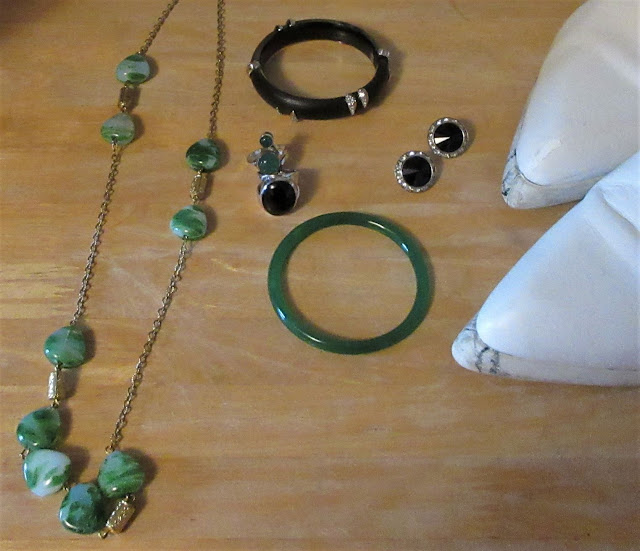 One of my colleagues on a Teams call today commented on my green jacket, and of course, I had to show off my necklace...and bangle...and ring...and my green eyeshadow too!
You might recall that when I bought this bomber a couple of months ago, it had been marked down in the thrift store multiple times due to the white spot on the front. 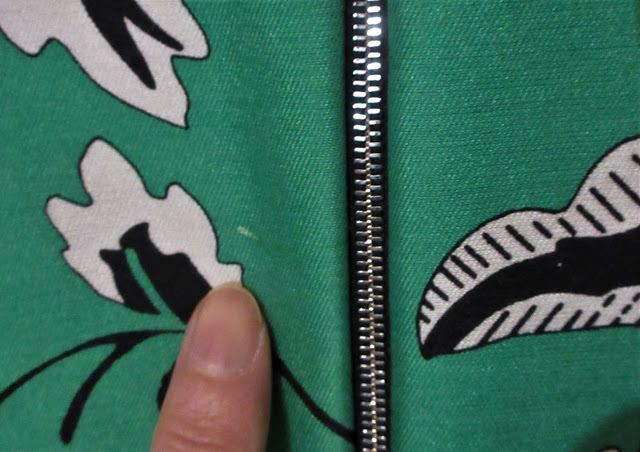 See the little wee spot? It looks like something was on the fabric when it was printed originally. It's not a spill or paint or anything, just lack of dye.
I touched it up last night with one of my Zentangle paint pens. 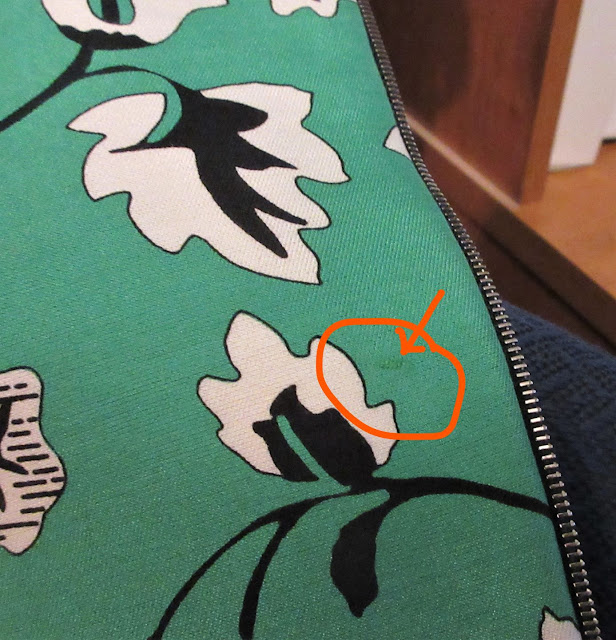 You can hardly see it! Ta-dah!

Flashback: Nygard Houndstooth Pencil Skirt
First featured here in my first year of blogging, in September 2008 - I'd bought the skirt a few weeks earlier, on consignment. I remember that it was the Velvet Crease's old store, and it was likely around $30.00. I didn't go much over $40 back then. 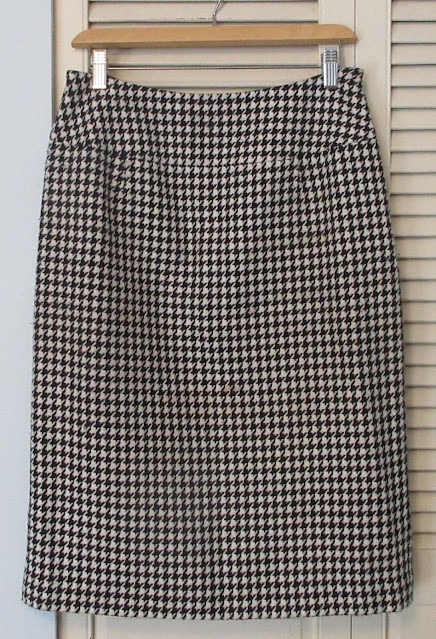 For a skirt that has now been 13 years with me, and was probably around 8-10 years old before I bought it, it's in remarkably good condition. These two pictures were taken yesterday. 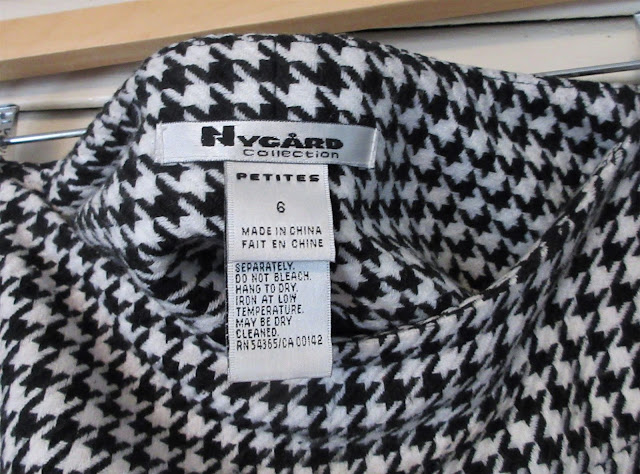 The fabric is acrylic, and it's a woven design (not a print). No fuzzing, and the weave is lined up nicely (look at the hem). I love the length of it (just past the knee), even though it's labeled a Petite.
It's by Nygard, a good quality Canadian department store brand, whose founder has been accused of some pretty horrific things recently which I am not linking to. I bought it second-hand so I didn't give any money to him, only the store I bought it from.
The skirt was an early purchase of good quality that I immediately recognized as being the Perfect Houndstooth Pencil Skirt. I have never seen its equal in all my years of shopping, and I'm ever in "Always Be Upgrading" mode when I shop.

This is the first time I wore it, in September 2009. I thought this was a very preppy look at the time - look at that sweater vest! Those are an old pair of Fluevogs that I gave up for being too painful.
November 2008. My hair is awful in this era - I was walking to and from work in my walking gear (45 minutes each way), and changing into my clothes at work, then again at home to do the pictures.

I was revisiting my teenage love for long cardigans here and was mad for belting everything, since I'd rediscovered my waist when I lost weight the previous year. I'd totally forgotten about those red Nine West sling-backs! They are very much of that time.
This skirt tapped into my love of classic and classy silhouettes. I'm very fond of this shape of thin sweater too - it's very pin-up-ish. I had this sweater in blue and red, and I'm surprised I never wore the blue one with it (maybe that was too adventurous for me!?).

This was in December 2008. A pretty simple look.
Return of the Sweater Vest! This was in February 2009. I loved this green shirt - I bought it on clearance at the now long-closed Esprit store in the mall in 2007-8.

I also really loved ginormous heels! I regularly wore 4" heels back then.
I'd forgotten all about these turquoise shoes - they didn't fit right and I let them go about a year later.

They were bought in Vancouver on our anniversary trip of 2009 - this outfit is from July 2009.
I'm back to my red bobbed haircut here, grown out from my previous shaggy/fluffy 'do.

This was a wardrobe challenge from September 2009. Dig those awesome yellow leather boots! I gave them away years ago - they killed my feet.
I spy my Grandma J's necklace in this December 2009 look. It will not be the last time - classy skirt + classy necklace!

I did a lot of single colour outfits with this skirt, but this is a very early pattern-mixing attempt with a red/white blouse under the black jacket (I was afraid to have the patterns side by side!).
Waggling my spotted scarf at you! This was in April 2010. 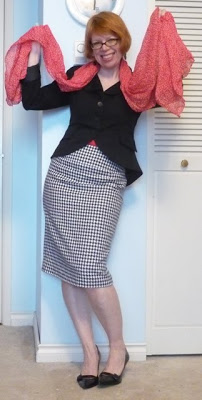 I have no recollection of that jacket whatsoever!
This cardigan was one of my very favourite pieces ever - it had cranes on it, embroidered in wool, and the embroidery went around the back of the neck and on the cuffs as well as the front. I miss it, but it was getting rather ball-y near the end.

I do love red shoes - I gave these to my coworker Holly ages ago. This was in October 2010.
L and I dressed for Christmas at my sister-in-law's in December 2010. If you're wondering why L looks so odd, I used to obscure his face by sticking George Clooney over it with my madd Paint skillz. 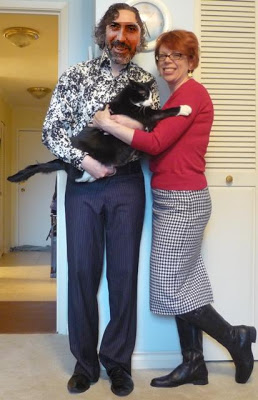 Aw, kitty Inigo put his paw out - he was such a lovely boy.
This skirt was worn three times in my 30 For 30 For 12 Wardrobe Challenge, during the month of November 2012, which was an "all neutrals" month.

I accented with a purple belt (I think I still have it) and tights. Vizzini ate the strap on those shoes.
I added a green cami and olive tights and jewelry to this November 2011 outfit.

Same shoes as previously. I still have that black leather obi and that necklace.
More purple tights in the last outfit of November 2011.

I didn't keep those shoes, but I like the strap on them.
My purple glasses and my blonde hair appear in March 2013. My year-long wardrobe challenge really helped me be more willing to take sartorial risks. I'm glad I did it, but ugh, so much work!

Familiar items start appearing, like that red leather obi and the shoes (Flashback here).
This was the one and only wearing of this vintage Oscar de la Renta blouse, in September 2013. It was too much for me! Ruffles everywhere! 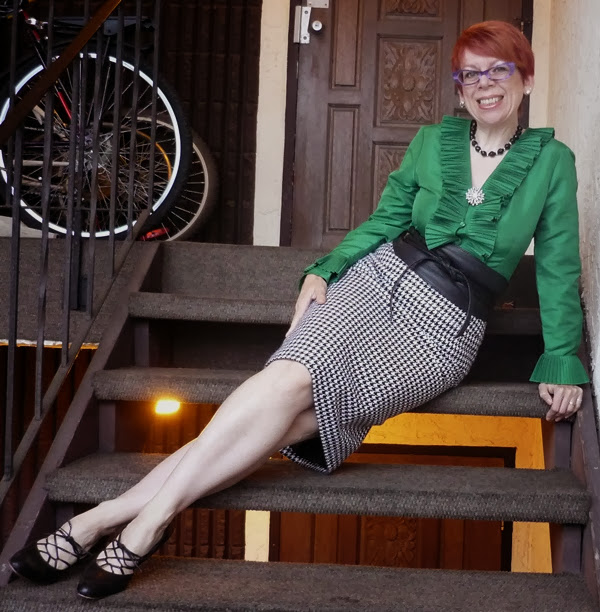 Grandma's necklace noted, and yet another pair of shoes that Vizzini ate - he chewed off and ate all those laces. He's mellowed a lot in 10 years.
My football team was doing well in November 2013, so I rebelliously wore my Panthers jersey to work on a Casual Friday.

What a rebel!
This was a much-loved outfit by my coworkers and blog-readers, from February 2014.

Something about that lemon yellow with the black and the pearls.
Changing things up in November 2014. My hair was purple and my style was evolving. 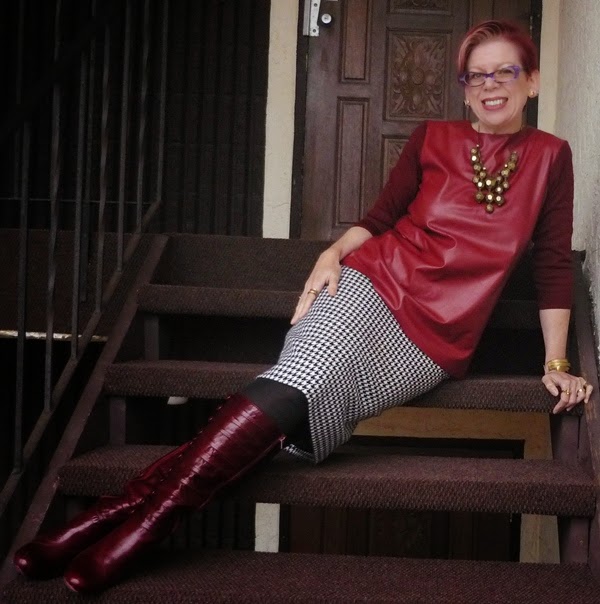 Oxblood was a favourite colour back then. Those were awesome boots, but I wore them out.
An early appearance of my green Fluevog kitten heels, in March 2015. 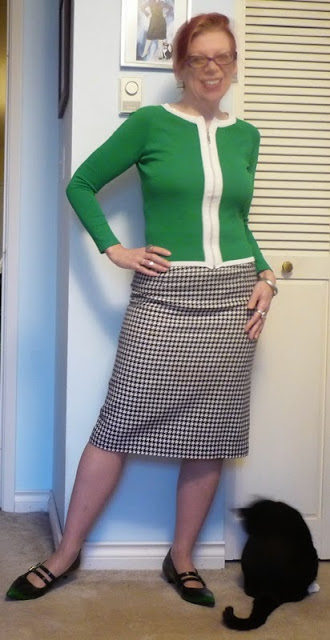 Caro has that sweater, and Vizzini's going after more shoes! Get out of there, you Shoe Chewer!
I like this classy outfit from December 2015. 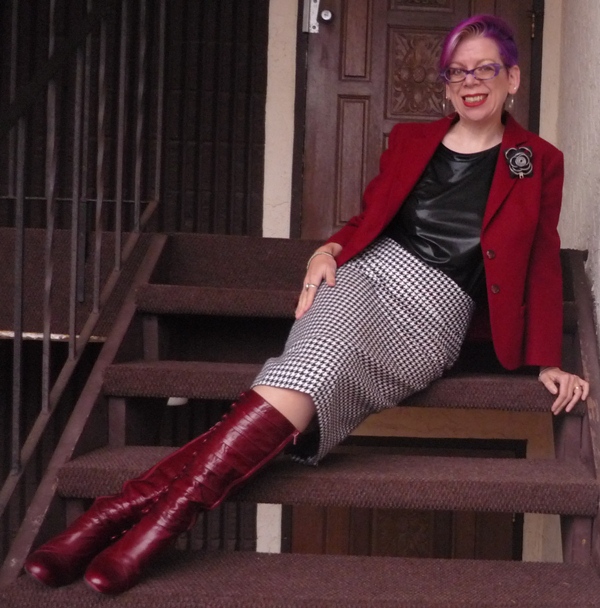 I still have that tee (I just wore it to Mom's on the weekend!), and the zipper rose brooch. Yvonne has the suit that the jacket belongs to.
Grandma's necklace again in October 2016.

I gave that sweater to Yvonne as well. Shoes Flashbacked here.
This is one of my favourite outfits, in April 2017. 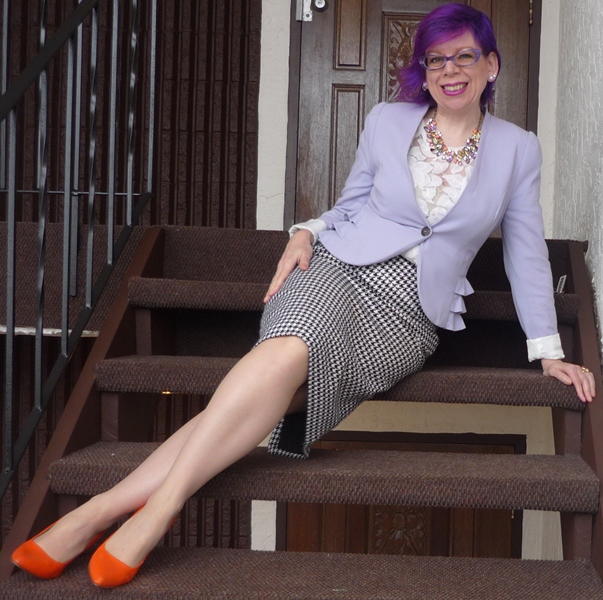 The purple, the orange, the lace top, the ruffles on the peplum. So good.
An easing-back-to-work look from January 2018. Turquoise glasses and growing my purple hair out.

I should wear those shoes again - it looks like Vizzini has his eye on them...
Same black t-shirt and the green kitten heels also repeat, in April 2018.

I will be wearing that lace bomber jacket again soon.
A snazzy shopping outfit from December 2018. My hair's been switched to lavender.

I let go of the jacket, shirt and shoes, but I still have all the accessories.
And here's the last time I wore this houndstooth skirt, in April 2020. Pink hair, Grandma's necklace, and that's a lot of neon orange! 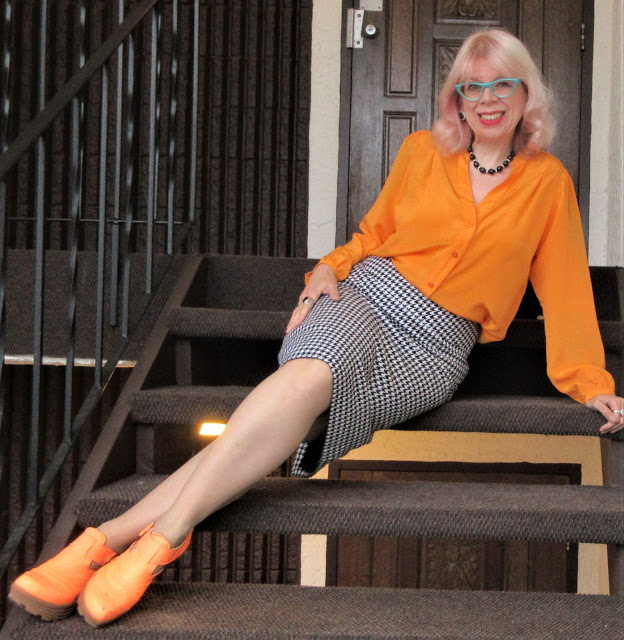 Early on in the pandemic - I do look a little "deer in headlights", don't I?

Mathy stuff: Wow, I've worn this skirt a lot! This wearing marks the 27th outfit, bring me to $1.11 per wear. I see a lot of houndstooth pencil skirts but I have never seen one better in quality, cut or fit than this one. Let's see how low we can go in cost-per-wears. To another 13 years!


Do you have a favourite? Is there houndstooth (or pied de poule!) in your closet?
Posted by Sheila at 6:11 PM