Hello, my friends! Back at work today, and...it was dead. I only had about a dozen actionable emails to deal with all day, but I did get a nice surprise in there. 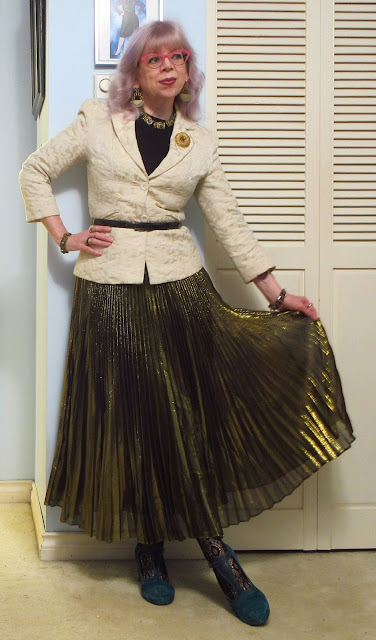 The awesome VPs bought me a honkin' Fluevog gift card for Christmas as a show of appreciation. Yay! I am trying to be restrained and either a) wait for bigger sales or b) wait for new styles to come out before I spend it (plus I have gift cards from L and Mom too!).

Anyway, I'll figure it out eventually. For now, let's enjoy my first work outfit of the year! 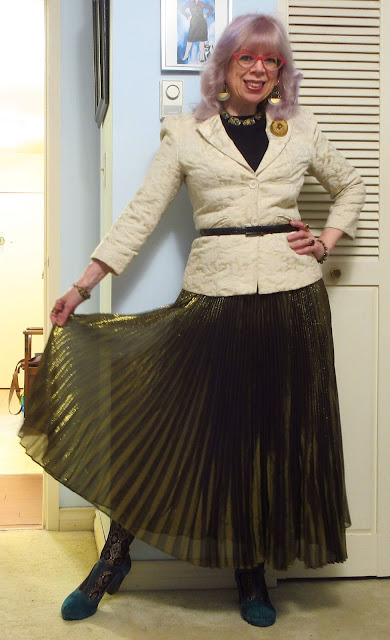 I had to wear this big swooshy gold/bronze skirt right away.
I'd been wanting to do a Flashback on this blazer for ages, and it went so well with the skirt.

I loved wearing the skirt all day, and wished several times that I had someone to swoosh it at! I saw 3 people all day.
I had to take the belt and jacket off when I arrived in the morning. I've been enjoying the last few months of not having hot flashes, but looks like the danged things are back. LOVELY. 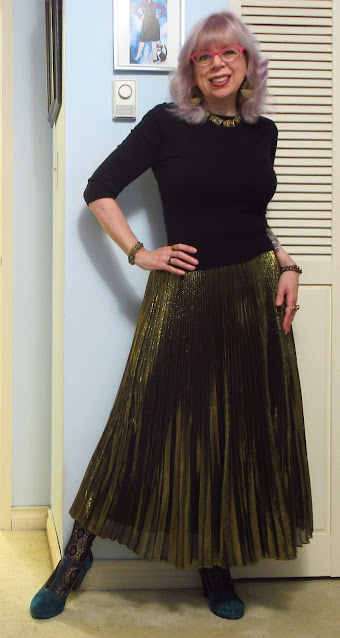 I like this with just the sweater too - very elegant.

The skirt did require a bit of wrangling as it really wanted to roll itself into my office chair.
Masked up - I've barely been outside for the last two weeks. This is one from Mom.

I felt very fancy and professional, even though no one saw me. This year's motto (if you didn't figure it out already) is "Life is Short; Wear the Clothes."
Outerwear - it was pouring out on the way to town this morning, but calm and clear by the time I walked home, in the dark both ways, which is why we have no stair picture for you. 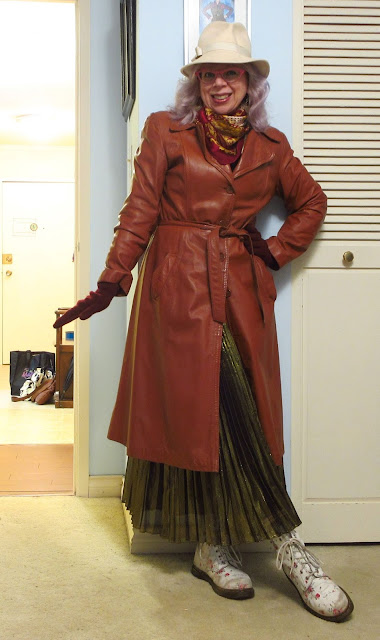 I also forgot to take the picture of my outerwear gear with my "real" shoes on - I remembered just as I was about to head out the door! Hence my lunch bag (all my lunch supplies for the week), shoe bag and purse are sitting in the hall there.
Boots by Doc Martens (thrifted).
The stuff: 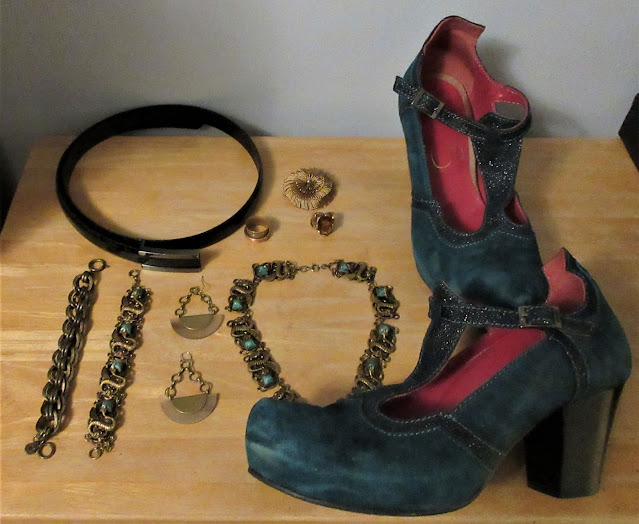 I like wearing these shoes with the dragon jewelry - they match!
Dragon bling: 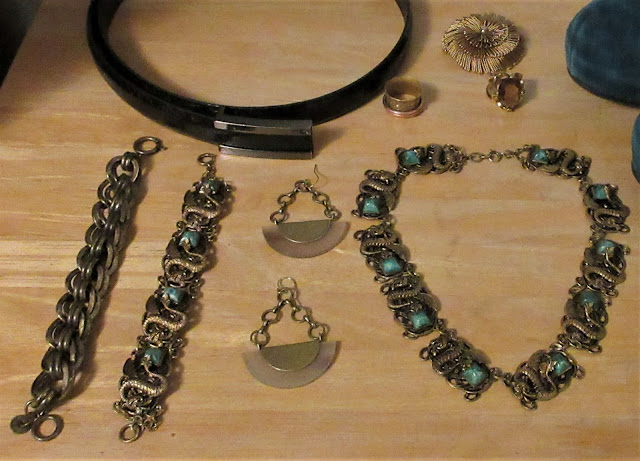 Throw it all on! Wear the jewelry too!
Of course, we're going to Flashback on the blazer. See if you can guess how many times I've worn it - hint: it's a lot!

Flashback: Cream Brocade Le Chateau Blazer
As you may recall or have seen me mention before, I did a year-long capsule wardrobe challenge, called the "30 For 30 For 12 Challenge" in 2012 and one month of 2013 (summaries here, scroll down). Every month, I pulled out 30 unique pieces of clothes and footwear and made all of that month's outfits from those pieces.
I picked up this lovely cream blazer in September 2012 (here) at My Sister's Closet for $20.98 and immediately knew I'd be incorporating it into my all-neutral November 2012 capsule. 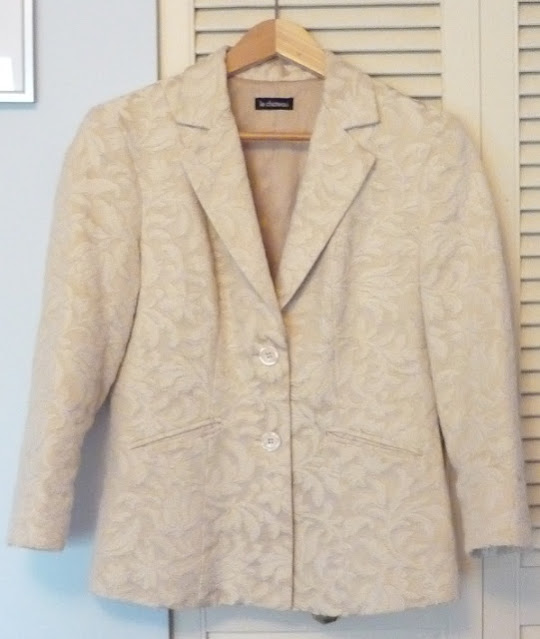 It is a Le Chateau label, so likely made in Canada. The fabric is woven brocade, it has that nice texture to it. Someone also paid to have the arms shortened to mid-forearm, so it is great for showing off bracelets.
My outfits with it are split between wearing it as a blazer, and wearing it as outerwear. I also often belt over it, as it's a nice slim fit, and frequently deploy a brooch on the lapel.

This is the first of three outfits from my all-neutral November 2012 capsule. Only that obi remains from this outfit.
Seen here as outerwear, also in November 2012.

I still have the long leather gloves, which are excellent with the shortened sleeves.
And lastly, also November 2012, I wore it as an open blazer. 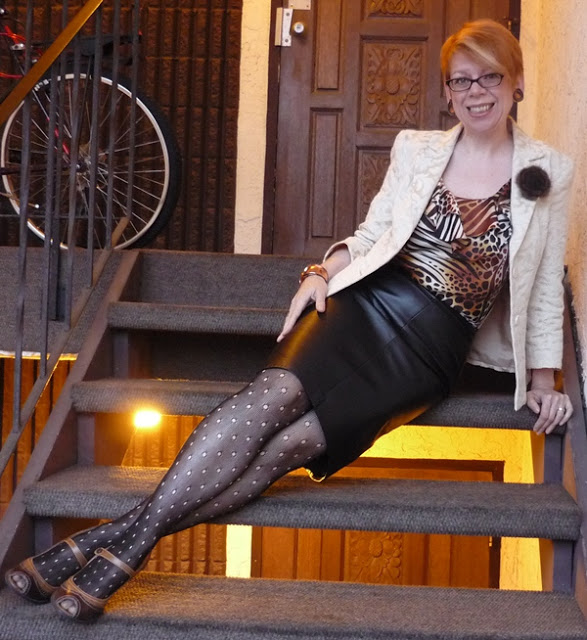 The versatility of this piece is one reason why I've had it for just over 8 years.
I wore it twice in February 2013, here with my leather jeans. 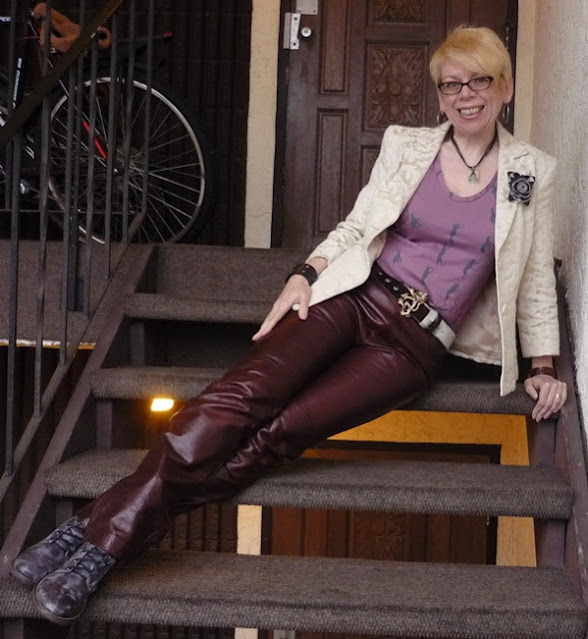 I almost wore that belt today (Flashback here).
I had a cream Club Monaco blazer prior to this one - as I'm fond of saying, "Always be upgrading". This blazer was a step up in fabric (brocade vs. plain) and style. The shoulders on it are slightly sculpted, which help keep it from looking dated. 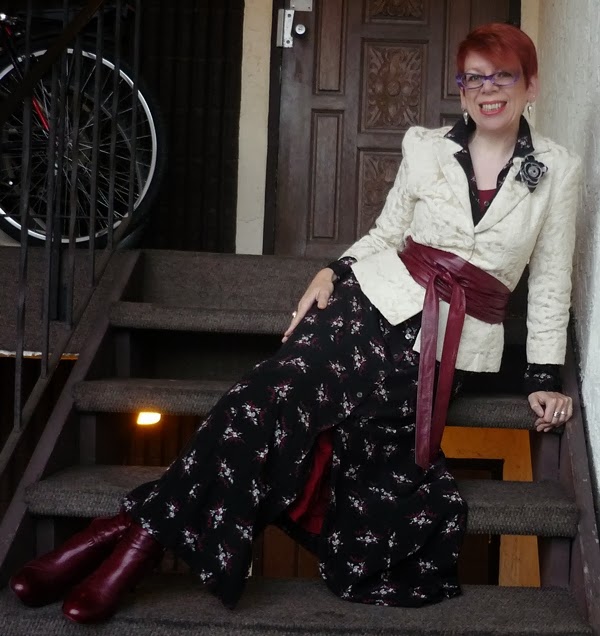 I still have some of the accessories from this October 2013 outfit, but I let go of this dress and those boots some time ago.
This November 2014 outfit is full of things I no longer have.

I went through a heavy phase of mermaid- or tulip-cut skirts - they were all the rage in the early 00s. Only the blazer and belt remain from this outfit.
My all-neutrals capsule month(s) in 2012 (I did one in June 2012 too) helped me get into wearing creams and browns together more.

Many of my outfits featured more neutrals after that, like this January 2014 look.
In February 2014, I wore the blazer twice. This outfit mixes olive greens with bits of colour in the "fruital" blouse.

Shoes Flashbacked here.
I like this February 2014 outfit better. 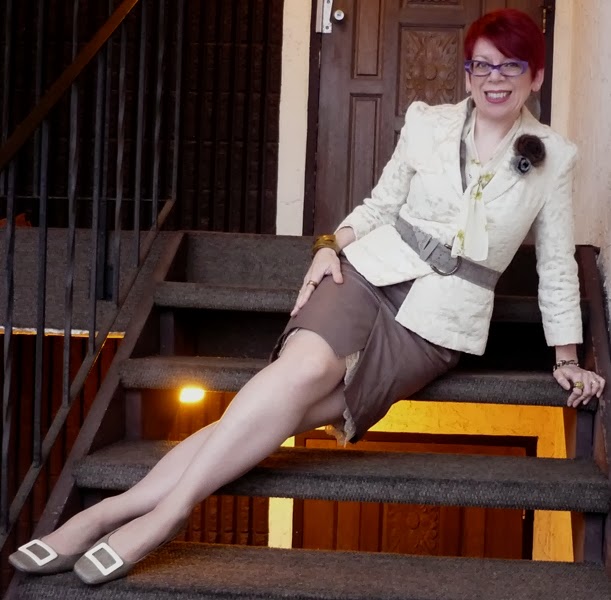 I still have that leather dress! I should wear it again soon.
This outfit is from April 2014, worn to celebrate all our friends' spring birthdays at Spinnakers.

The jacket was worn as outerwear, with vintage fur pieces added. Vizzini helped.
I did a combination of blazer in the office and "this is my coat" in September 2014.

That's one of my favourite skirts, Flashbacked here.
There's my Laura Ashley vintage dress again, with the same leather obi as before, only a year later, in November 2014. 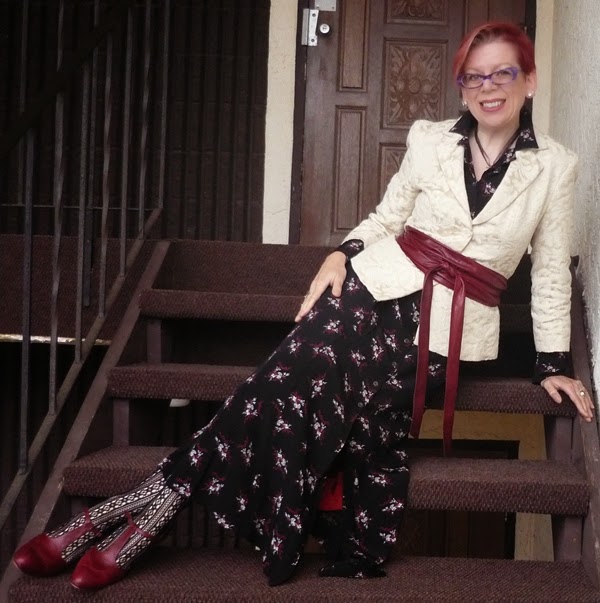 I don't miss that dress (it wasn't a good fit), but I do miss my blood-red shoes and boots.
Another simple neutral outfit, from January 2015.

I didn't unpack that Gianfranco Ferre skirt this year, but I still have it. Next year!
This outfit, also from January 2015, was all about the shoes (I don't have them anymore) which were black with pink speckles.

I look like a Creamsicle.
This is a very classy look, also from April 2015. 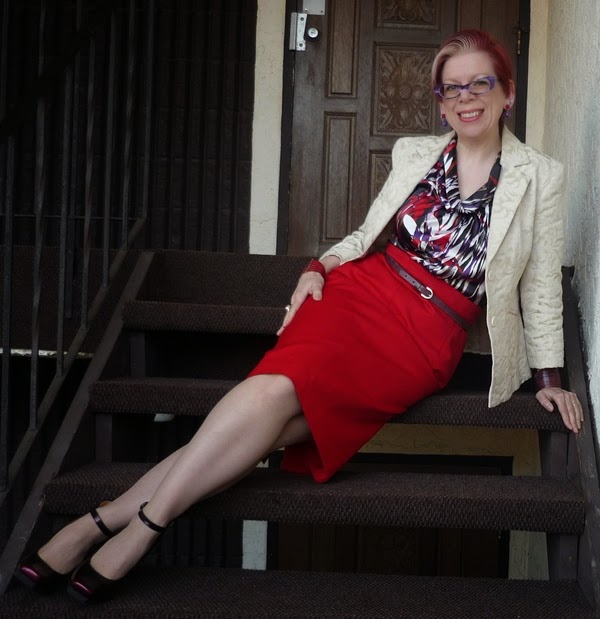 I think this might be the first time I wore those shoes, which need to be worn again soon!
I often use this cream blazer instead of white - close enough! - as I did here in May 2015. Only the jacket (and the cat!) are still with me.
This is a rather lacklustre outfit from June 2015.

Another skirt I didn't unpack this year, my Andres Courreges piece will come back next September.
Blazer as outerwear in November 2015 - those long leather gloves are excellent for keeping my arms warm.

We saw those boots in Flashback here.
Also in November 2015, I returned to belting the blazer.

That's such a fun outfit. Skirt Flashback here.
Outerwear over my yellow dress in May 2016.

Not much to that. Shoes Flashback here.
I love this outfit from September 2016 - this shade of blue is so pretty. I'm sad that the skirt got moth holes right in the front! 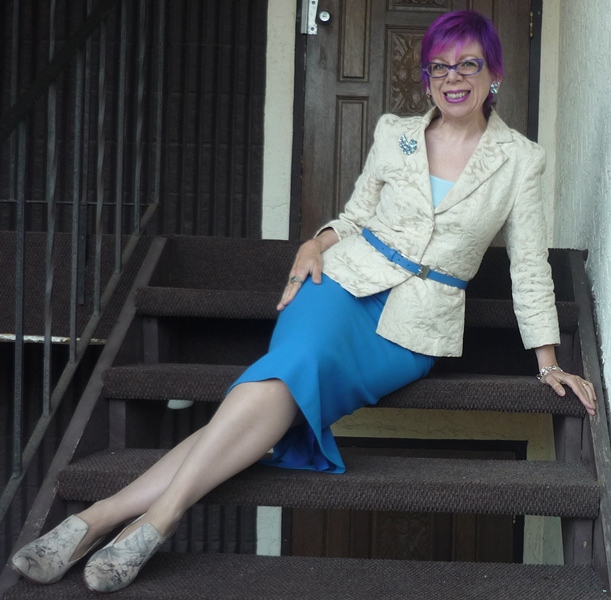 Shoes Flashback here (although I no longer have them).
I was thinking of this outfit from December 2016 when I created today's outfit - I was sure I'd worn the blazer with a long swooshy skirt before and I was right! 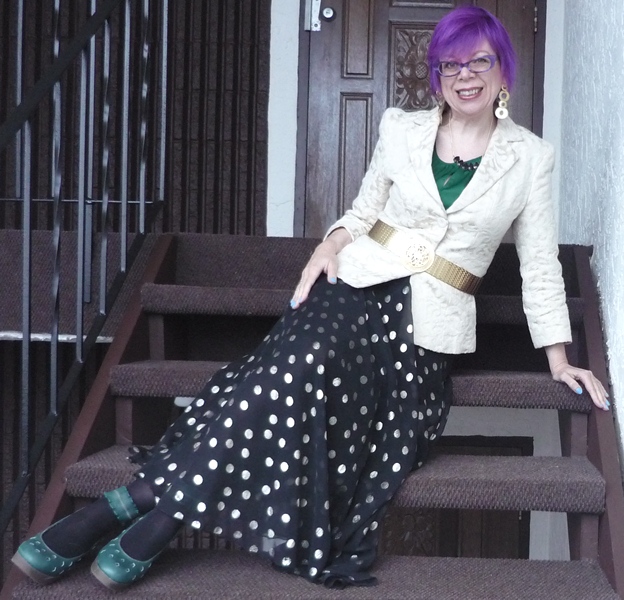 Sooner or later, I'm sure to wear this blazer with all of them!
I only wore this metallic striped skirt a few times, here in March 2017.

Blazer + belt + full skirt = outfit. Easy! Although it took me a little while to figure it out - you have to just keep trying!
I wore the blazer as outerwear over this look from April 2017.

I have slight regrets at not keeping that skirt, but it was really difficult to match tops to it.
In October 2017, I wore the blazer as my outerwear for dinner with Tammy.

Boots Flashbacked here.
I really dislike this outfit from the knees down. It's from January 2018, and I wore these new tights. 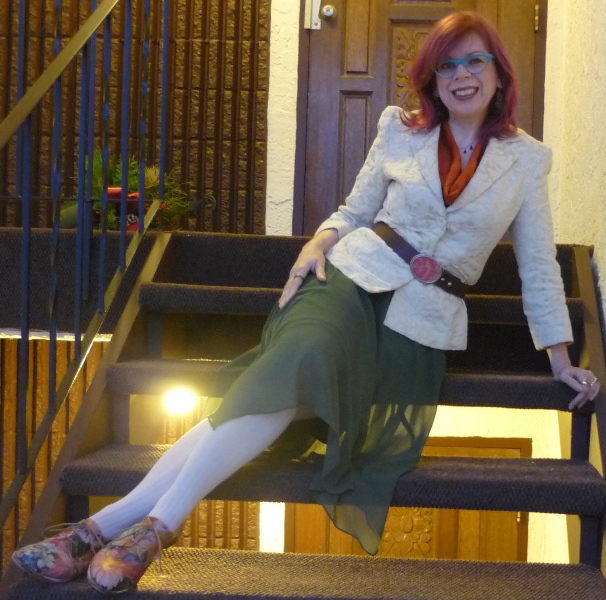 Ugh, I dislike white/cream tights intensely. They are not for me. Shoes Flashbacked here.
In contrast, I love this October 2018 look.

Sadly, I let go of those boots - they were just too high! I need to wear that skirt again soon.
And this is the last time I wore this blazer, with this new-to-me "library"-themed skirt, which I passed along this past year. 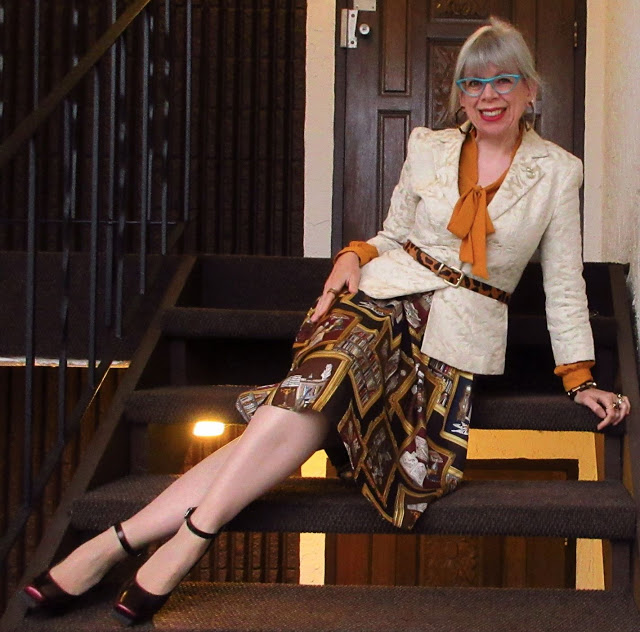 I noted in October 2019 that I had put that blouse and this blazer into the giveaway pile, but reconsidered and I'm so glad I did. The only way I'm letting go of this blazer is when I find the "upgrade" version of it...and it's going to be hard to top!
Mathy stuff: Today's outfit marks the 31st time wearing this blazer, making it one of my wardrobe powerhouses! That brings me to 68 cents per wear, and it's still in good condition and I still like it, so that should go down even further over time.
Did you guess 30+? What's your favourite look?
Crochet Adventures!
I learned to crochet when I was quite young. Mom taught the entire neighbourhood to sew, embroider, crochet and knit - both boys and girls.
I've made blankets (a lot of them), and did the fuzzy-scarf-for-Christmas thing one year, but one of my best Christmas memories as an adult was the 30+ piece Barbie doll wardrobe I created for my two nieces Hannah and Zoe when they were 8-10 years old about a decade ago. I used my football-watching Sundays to create a massive collection of dresses (most very frilly), skirts, tops, jackets, pants, shorts, bathing suits, coats, purses - everything you can imagine! - and capped it off with a wedding dress. I gave it all to them in an 80s hatbox that I covered in tissue and glitter. I remember how big their eyes got when they opened it. "We get to keep all this?"
So, seeing that my fellow bloggers Vix (link) and Senora Allnut (link) have been getting their creative on, I asked Mom if she had any wool she could spare. Thanks, Mom! 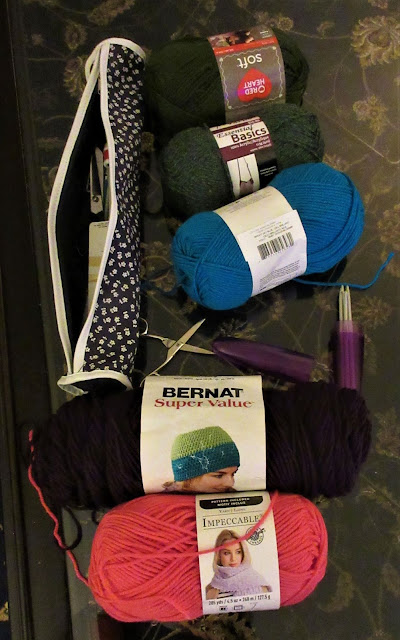 Two shades of green, turquoise, purple and pink.
I tried making some of these flowers that Monica started. I had thoughts of making a vest like in these snazzy vintage patterns, but I'm limited with the amount of wool I have. 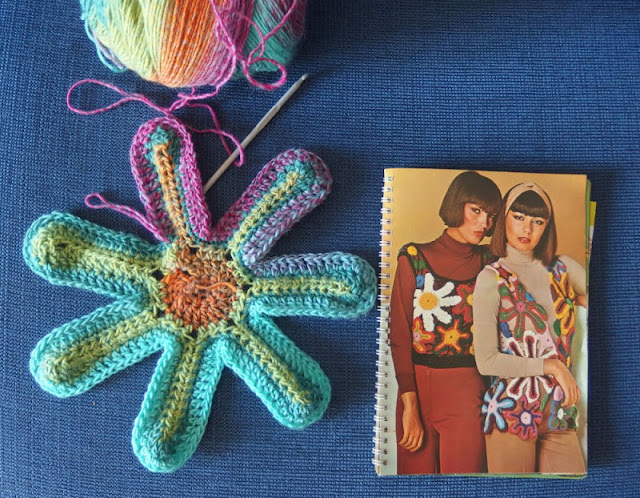 But my wool is quite thick, and I didn't like the demented starfish look of them. 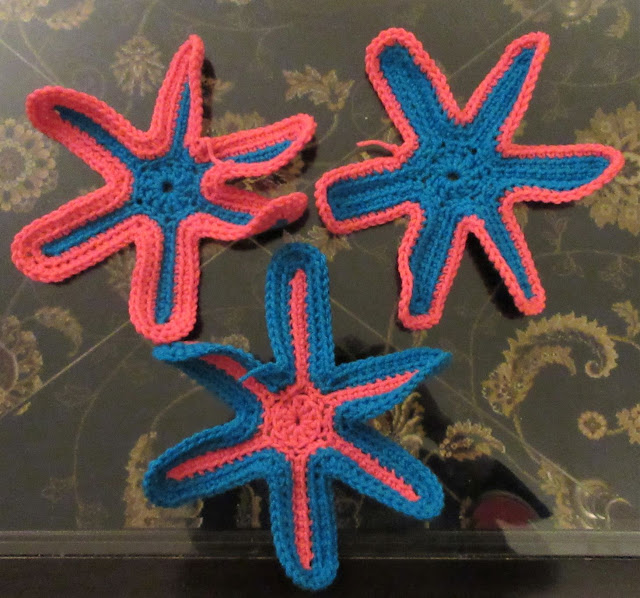 So I pulled them apart and started making a striped...thing.
I didn't even take a picture of that, so yesterday, I pulled it out, rolled up the wool and started over with something really basic: a scarf. 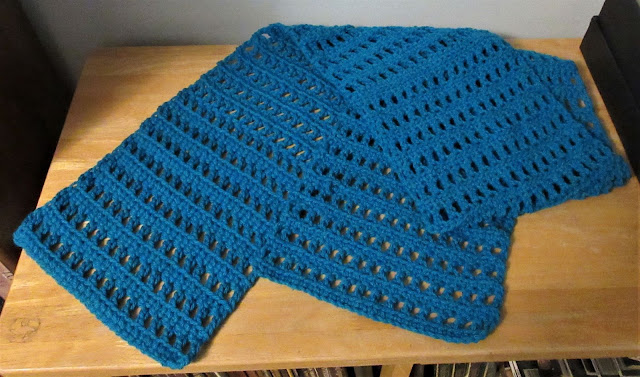 I used the entire ball of turquoise wool, and I'm pretty happy with it. I made up the pattern (it's a row of single crochet, followed by a row of double crochet + 1 chain, in every other stitch. Totally easy (I always make up my patterns).
I can't make just scarves out of all the wool (I already have a turquoise scarf, and a pink scarf)...what should I try next? Thoughts? Ideas?
Posted by Sheila at 6:19 PM