Ah, colour, how I enjoy you. 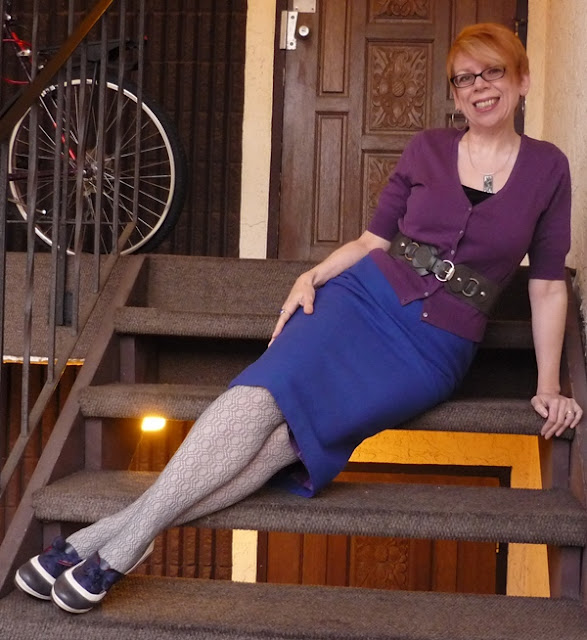 There's a whole lot of colour going on here!

This is my purple cardigan purchased back here in September on consignment. It's by Kenar and was $24.00. It filled a hole: must...have...purple...cardigan. But it's not the greatest quality. The neck doesn't lie right and I don't like that it's straight through the body. I like my cardis to nip in at the waist.

I'm wearing it over my black velvet shell, also purchased in September (hmmm, I did a lot of shopping in September), here (scroll waaaay down). It's by Bianca Nygard and although I got it on consignment, it still had the tags on. It was $22.98 - the original price was $48.00.

The skirt is my fabulous vintage Andre Courreges purchased just about a month ago, here. It's 80s, is wool and cashmere and I paid $5.00 for it in a thrift store! Yay for thrifting!

For work today, I wore textured grey tights, a thick grey belt, a simple necklace and white gold hoop earrings. Tonight is our Weight Watchers Christmas dinner (I know, sounds like a contradiction, but we do eat!) at a local restaurant, so I wanted to glitz it up a bit.

I didn't change any of the core pieces, but untucked the velvet top, opened the cardi another couple of buttons, swapped out for the spotted leather belt (locally made), and added some sparkle in the form of this vintage necklace, a crystal ring and tiered crystal earrings. Voila!

But I know you're looking at the shoes, right? 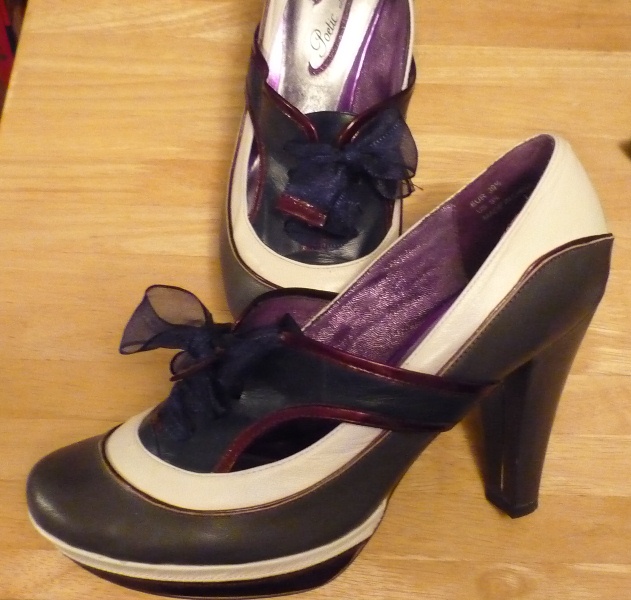 These are probably my absolute favourite shoes I own. Best Shoes Ever. They're by Poetic License and I bought them 4 years ago with a gift certificate that L gave me for Christmas in December 2008 - I think they were around $140.00. A local store, She She Shoes sells this brand - I recall that these also came in black and white, as well as this burgundy, navy, grey and white.

I first wore them here where I dubbed them Best Shoes Ever (you may recognize my bright blue top from May's capsule, but that's all I have left of that outfit).

I've worn these tons of times and have been patiently waiting to have them in a capsule, all year!

I wore them in January 2009 with a lovely patterned silk skirt, the day I finished my beginner Aikido certificate in April 2009, with a black suit in June 2009 (aw, look at Inigo between my feet), in August 2009 with a kooky crinoline (I remember people at work being boggled by that outfit), in April 2010 with a menswear-inspired look, with a nautical-ish look in June 2010 (I regret getting rid of that skirt), in August 2010 (with last month's leather dress), in April 2011 with the lovely skirt Megan Mae sent me (we'll be seeing that really soon!), in August 2011 (3rd outfit, lookout for the boob flash!) and last wore them in November 2011 (with two pieces from my February capsule, in which oddly, I never wore them together).

Speaking of Megan Mae, look what I got in the mail today! 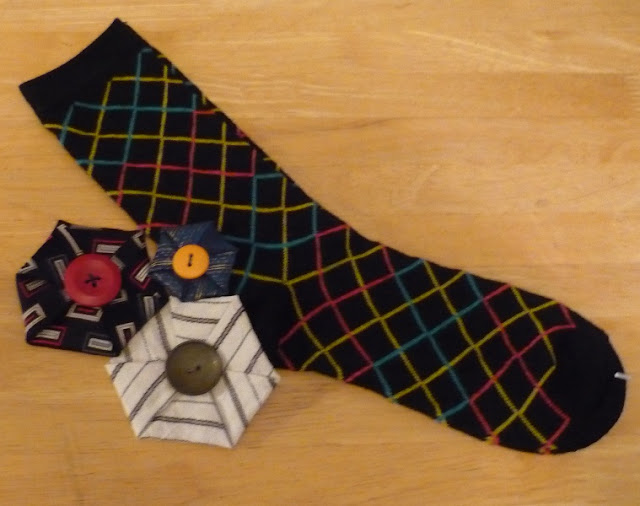 Aw, Megan, you're such a dear, thank you! I love those crazy socks (so my colours!), and I have a huge collection of buttonflowers now! I should figure out some what to wear them all at once!
Posted by Sheila at 6:02 PM