If I could have worn pajamas today, I would have. I got home after 11pm last night (after Mom, Vicki and I finished playing with this tree, which my friend Justin's company did as an art installation) and went straight to bed. And then I worked late tonight.

But I did the next best thing to pajamas and wore sequins! 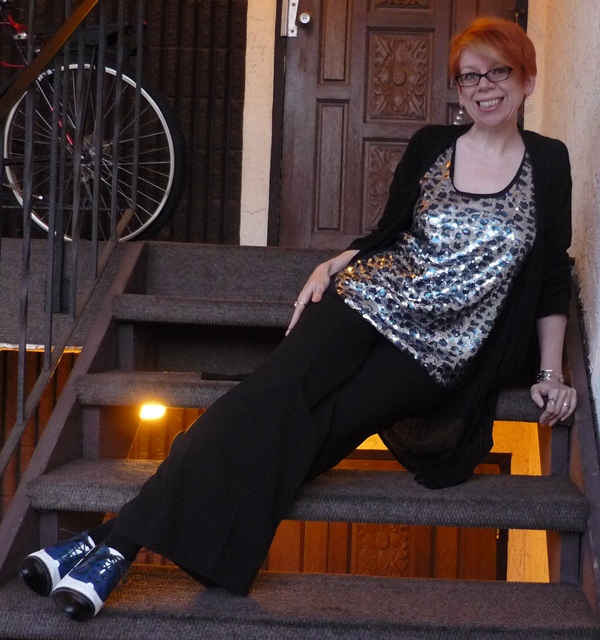 So let's just get this out of the way now. This black cardigan is new to the capsule. I had intended for it to be in the December capsule, and then I got the wonderful mullet coat and swapped it out. However, I forgot that I made up a whole bunch of outfits that don't work without this cardigan. Like anything with this awesome sequin tank!

I've dumped the little velvet tank (this one worn here, that you can't even see in these outfits and may as well have been a plain black cami!) since it's an underneath camisole-like piece anyway and I'll rarely wear it on its own. I've substituted this drapey cardi and I feel better. I also realize that I'm starting to play loosey-goosey with my rules of the challenge now that the end is getting nearer.

For instance, I really don't have enough tops for January's capsule and I don't feel like going out and buying things that are duplicates of what I already own that would work perfectly well. So I'll be re-using a few things from previous capsules (which I did allow in the rules, technically). I'm also probably going to remove one of these pairs of painful Fluevogs and sub in a pair of black heels that don't kill my feet.

But enough whining! It's the weekend. Let's look at this outfit.

The cardi has been a workhorse since I got it, and I still love it as a drapey layering piece, even though this style of cardigan is probably not fashionable anymore. I don't care. It's by Kensie and I got it at Dots in December 2010 for $29.99.

I last wore it in September 2011 with my Desigual dress (oh, how I love that dress), in July 2011 (last outfit, just thrown over a simple dress), in May 2011 (with the lettuce dress and crazyass heels), in April 2011 (for a casual outing, 2nd outfit), in February 2011 as part of a Capsule Wardrobe Challenge, as part of a mini-travel capsule (I'm piloting a helicopter!) in January 2011, which is the first time I wore it. I'm sure I've worn it lots of other times but I'm getting hungry and don't want to look for them all.

The sequined tank was awesome to wear. One of the guys at work said, "We should start calling you Champagne, you sparkle so much!" Aw!

I bought it on consignment for $14.50 back in July while on a Sunday jaunt, the same weekend I thrifted the purple sequined skirt. I love shopping out of season!

I last wore these wide-legged pants here and was dissatisfied then with them. I felt like they were too much volume with this cardigan, but I was tired and couldn't face planning a new outfit at the last minute. Much as I like them, they just aren't right for me. Maybe I'll swap them for black shoes instead of being short a pair of shoes this month.

Speaking of killer shoes...man, I love these and they are so gorgeous, but ugh, my feet hurt after wearing them all day - and I even cheated a bit and wore my runners (it's okay, they're silver Ugg runners!) around the office before and after I ran some errands out in town. I last wore these fabulous Fluevogs here with my schoolmarm outfit and liked them much better then.

I did some sparkly earrings and my silver cuff and a couple of silver/blue rings, but no picture. I'm tired, and I just cleaned up cat yark, and I need dinner! I have another busy weekend ahead (go ahead and call me a party animal!). Hope yours is full of comfort and joy.