One of my co-workers used to work at a design school. Over the last few months, during my work's renovations and moves, I cleared out a ton of old office supplies and donated them to her old workplace. In return, she bugged them to let me know when they were doing a fashion show and maybe I could be a model?

Well, I'm 5'4" - and I've been that height for a long, long time. I've never had any dreams of modelling,and I've never considered myself that attractive, although I know I'm not ugly. Let's just say I clean up well and leave it at that. But you know? It would be really cool to be in a fashion show!

So when the casting call email came, I said, "Hell yeah!" This is what I wore. 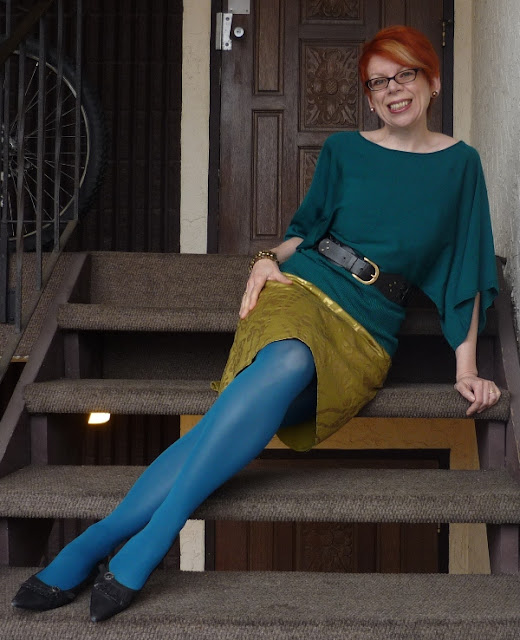 My teal sweater (last worn here), my chartreuse skirt (last seen here) and I swear those tights are a much closer match to the sweater in person. They always photograph blue!

I also know...I'm old. I'm wrinkly. But so what! Maybe one of the design students will want to make clothes for a curvy old chick like me. I deliberately picked this top because you can see a lot of my tattoos at the back.

I did not wear these shoes (last seen here) to the casting call - they were worn all day for work. Sue and I strolled down and I changed into a pair of "model shoes":
Not in the capsule, but whatever; I had them on for about 5 minutes total. I wore them last here.

They took my measurements (bust, waist, hips and height), took a straight-on face shot, one of me smiling, one with my number (23), and a profile shot. Then I put the shoes on, walked towards the camera, turned around and walked away. Done. "We'll call you if we decide to use you."

I know I'm not going to get called, but it was really fun to do it - and hey, you never know. Scratch one off the bucket list.

One of my other co-workers said my outfit reminded him of Poison Ivy (from Batman). That reminded me that I once dressed as Poison Ivy for Hallowe'en, about 15 years ago. Here's a blast from the past:

I'm 30 years old there, and that's our old apartment. The black streamers were from my 30th birthday party - I tacked them to the ceiling to make a giant cobweb. My 30th birthday party was themed: a funeral party for the death of my 20s. Everyone wore black. We ate black food and had black jello shooters. It was the year L and I got married (so 1997), which was also the year: we got Othello, L lost his job, my Uncle Jack died, my grandad died, Princess Diana died, my dad died, I quit my job I'd been at for 11 years and went back to university after a 13 year gap, and my gran died. Oh, and L also got his vasectomy that year, ha!

Turning 30 was just the cherry on top.

But I digress! I made my costume: a bunch of plastic ivy that I sewed onto a green skirt and a sheer green lace top. I glue-gunned a bunch onto hair-clips for my hair, and made wrist bands. I did all my make-up green.

Here's L in his Joker costume.

Here we are at the party: 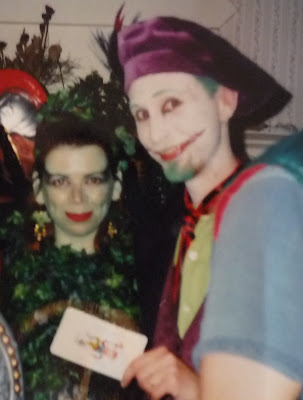 I did a good job of his make-up. Funny, neither of us are wearing glasses! I have my contacts in, and he didn't wear them back then. Hee, he also has short hair!

Hope you enjoyed that little jaunt down Memory Lane!
Posted by Sheila at 7:39 PM

Email ThisBlogThis!Share to TwitterShare to FacebookShare to Pinterest
Labels: 30 For 30 For 12, April