I had a really busy weekend, following an exhausting week. I need another weekend!

Getting some catching up going on here, this is what I wore to Weight Watchers, brunch out, and to Winesday with my wonderful gals:

It was still a little chilly on the legs but not too bad. That's my corduroy skirt that I last wore here.

Yesterday I had "Day with Auntie Sheila" - I do this for my nieces (the two eldest ones) every year on their birthdays. I had my day with Hannah (8 years old) a couple of weeks ago, and yesterday was Zoe's turn (11 years old).

We did High Tea at a local swanky old hotel, so of course, Crazy Auntie had to get her funk on:

I had fun adding the double-layered tights with it:

They were a little on the warm side later in the day, though.
Dress (Betsey Johnson), t-shirt (SportMart), belt (gift from Ruth), boots (Aldo, consignment), necklace (The Bay).

I finished another graphic novel a few weeks ago and forgot to write about it (I've been "off" reading the last little while and have been doing crossword puzzles to make myself dozy before bed. I go in cycles this way).
Kelly lent me this one (he's been reading my Sandmans) after he read my Jeff Loeb Batman titles. It's "Arkham Asylum: Living Hell" by Dan Slott and Ryan Sook: 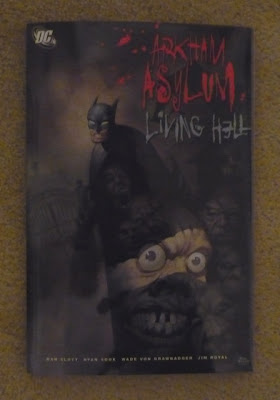 I enjoy the newer Batman series (much like the new series of "Batman" movies, they are darker and not as campy as the originals). This one actually barely features the Caped Crusader.

Stats: Uh, it's a graphic novel, so about 4 comic books' worth of pages. Started around October 1st and finished a couple nights later.
Blurb: As I mentioned, this novel really doesn't feature Batman (he makes a token appearance near the end). It takes place almost entirely within the walls of the infamous Arkham Asylum, which is where all the psychotic bad guys in the Batman universe end up if they have good lawyers (if you saw "Batman Begins", the Scarecrow ends up in Arkham). The plot of this story revolves around a rich tycoon who decides that pretending to be insane is going to be easier on him than going to jail, after he's caught as a criminal. Bad idea. Very bad idea.
I found the story interesting and full of little twists and turns - but be warned, it's violent. The illustrations are very well done and evoke the minds of the madmen; slightly warped and askew versions of reality. If you enjoy the re-booted Batman, this is a fun side-story.
Posted by Sheila at 7:37 AM