Black and White and Red All Over

Holy moly, I'm tired. I see by the Dolphins clock that it is nearly quarter to 8 and I haven't had dinner. 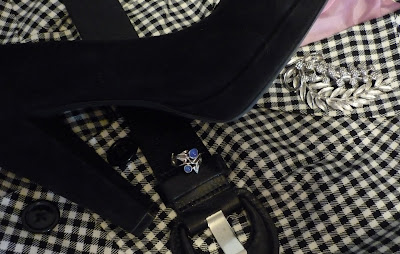 And a close-up of the ring: 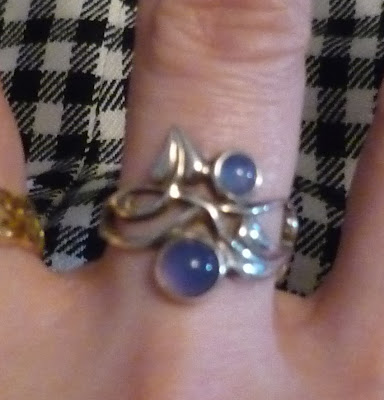 Whoa, too close.
I got this ring in Scotland, I think near Inverness - it was handmade there. It's sterling silver and the stones are sodalite, which is native to Scotland. It was $75 13 years ago. L and I went there after we'd been dating for about a year (we'd already moved in together).

This calls for a story!
About 6 weeks after we'd met, we'd been down to the local pub here for Friday night drinks - I was wearing a fabulous linen hat (which I still have, in my clothing archives). L didn't drink, and was driving me home - he got stopped at a road check. We continued up the busy street and he gave me a glance to admire my lovely hat...and he slammed into the rear end of a car that had stopped suddenly at a mid-block crossing.

My knee slammed into the dashboard, punching a hole in both the dashboard and my knee. We pulled over...I felt faint, my knee was bleeding. I got an ambulance to the hospital and they gave me a tetanus shot and stitched my knee up. Fortunately, all the important stuff (ligaments, tendons, muscles and bone) were completely missed! However, I sued the insurance company for insuring such a poor driver as my boyfriend. His car was wrecked, by the way, and the people we hit were fine; no injuries except for me.

It took a year to get the money...but I got several thousand dollars. By then, we were pretty sure we were "meant to be", so I said to L, "I wouldn't have gotten this money if it weren't for you. Where shall we go?"

And we went to Scotland. We got married 9 months later.
---------------
I'm taking tomorrow off, and L and I are headed over to Vancouver for a short visit with friends. We always do this for our anniversary, which is next weekend (but I accidently planned something next weekend, so we're going this weekend instead).

I am going to do a special feature over the weekend - watch for it!