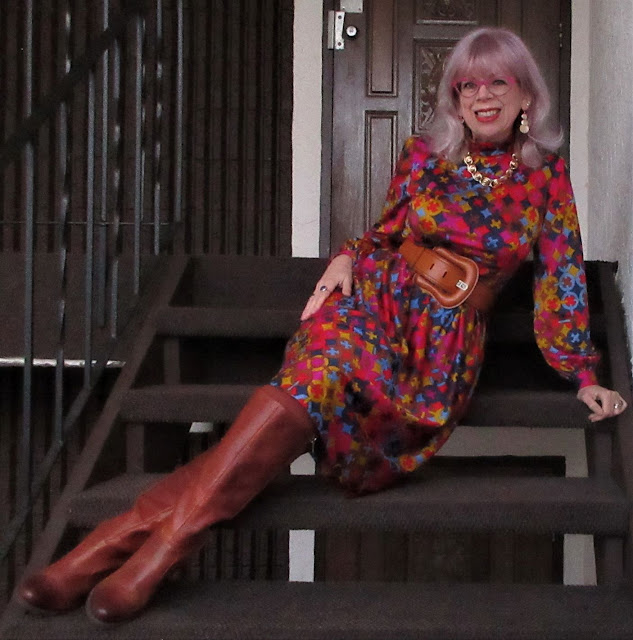 Return of the Stair Pose! That's always cause to celebrate.
The Castle seemed very close this morning. 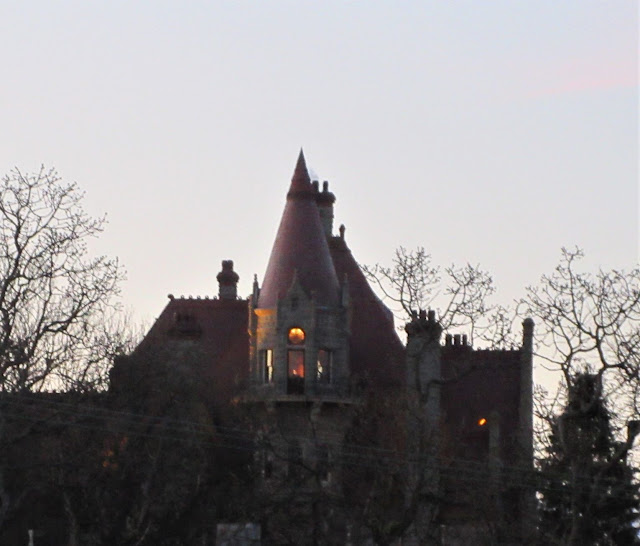 As you can see, our weather is clear! We had actual sunshine all day today, but brrrr, it's cold.
Yes, I've hemmed the dress.

This is a much better length for me, although it does remove a little bit of the "Wow Factor" from the dress.

However, as I noted last time I wore it, it was not quite long enough.

The chop means this is now an almost perfect Jammy Dress (no pockets), and I'll wear it a lot more.
Masked up.

One of you readers asked if I'd add my mask to my "stuff" picture so that they could see the pattern.
This one's from Lazy Susan's.

I wash my mask the second I walk in the door at home (safety first, kids!), and then I unpack my shoes and take my "stuff" pictures well after that. I'm sure no one wants to see my wet mask, but I could implement an outerwear accessories picture if anyone's interested - that stuff is all together with my mask in the mornings when I take the bulk of my pictures. Yes? No?
Outerwear. The Unsafe Ocelot! 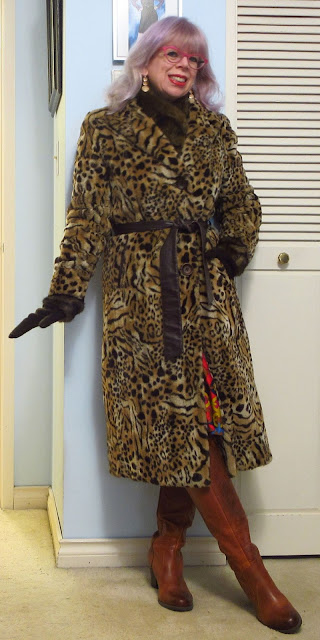 A couple of my favourite coworkers were in the office briefly today - it was wonderful to see Zeudy and Flavia, who gasped when she saw me in this plushy faux fur coat.
The stuff: 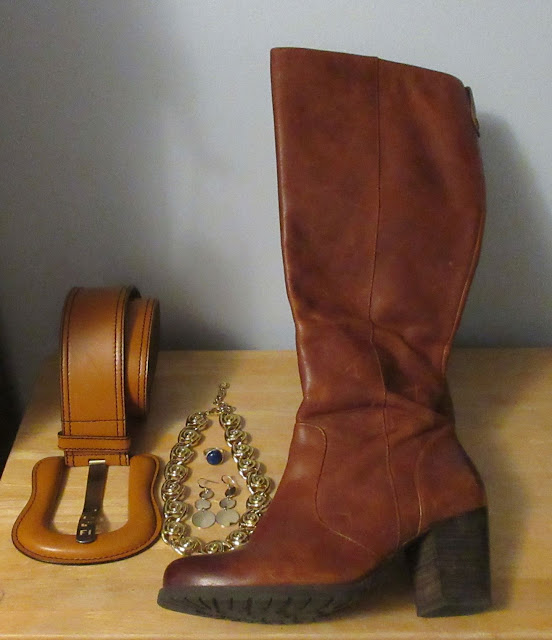 These are pretty basic boots, but that's why I bought them. We're going to have a Flashback on them shortly.
Bold bling: 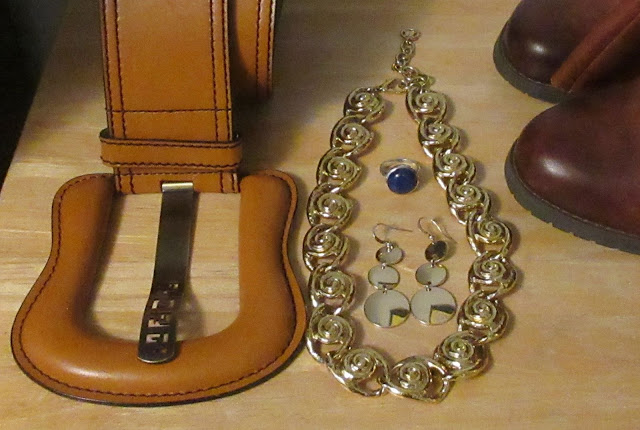 Gotta be bold for that puzzle pattern.
Caramel Clarks Indigo Boots
L and I went to Italy in October 2014 with our moms - it was a great trip, but I had intended on buying some awesome footwear there. Unfortunately, I didn't find anything that really rang my bell, so I indulged when I got home and bought these new and on sale at local shoe shop The Cobbler (it's an institution - I've been shopping there since the 80s). They were $199.00 and I bought them here in October 2014 while I enjoyed the dregs of my vacation time at home. 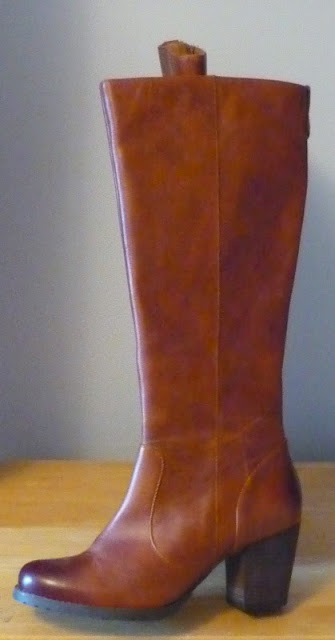 I specifically wanted a caramel colour, in a classic shape, heel and toe. Not too high of a heel, needs to go to the knee. Must be leather and comfortable.

It was a tall order, which I why I went retail - local, brick and mortar! - and found exactly what I wanted. I love how the toes  and heels of these are a little darker than the rest of the boot - it reminds me of Siamese cats.
I wore them right away with some things that I found on that same shopping trip, in October 2014. 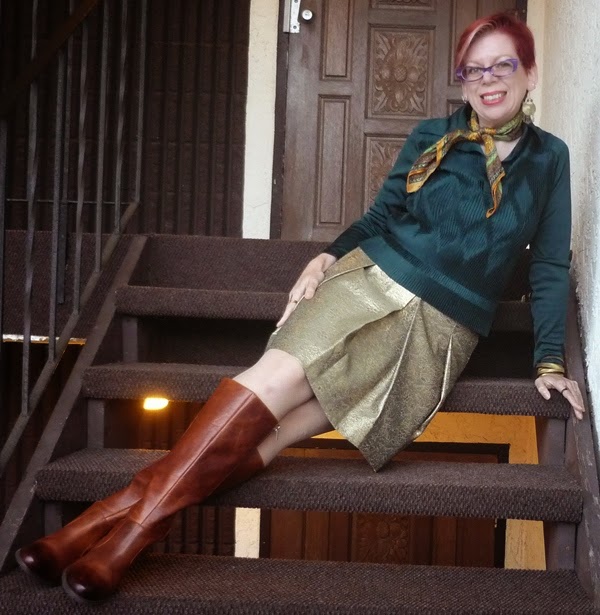 This is the infamous, "You look like Carol Burnett!" random stranger compliment outfit. Skirt Flashback here.
This lavender ultra-suede dress was not quite me, and was only seen this one time, in November 2014.

I still have the anatomical heart pendant, but I upgraded that belt with my Fendi one a few years later.
I found this amazing vintage coat at the giant Vintage Expo that used to happen at the Crystal Gardens - this is one of the few times I wore it, in December 2014. 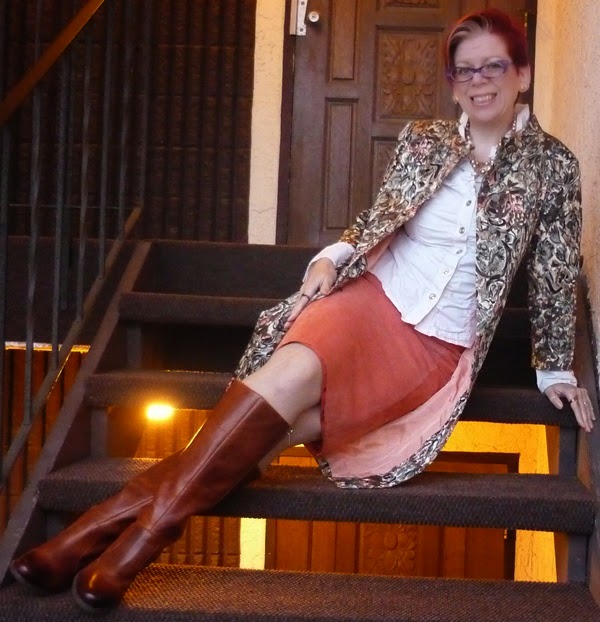 I miss that orange suede skirt a bit, but it had lining issues (you can see it hanging out there).
This will look familiar, if you remember my embroidered jacket Flashback here.

We'll see this combo again! This was in December 2014 as well.
The boots are such an excellent warm neutral - seen here with my Smoking Lily Cape of Good Hope, worn as a skirt, in January 2015. 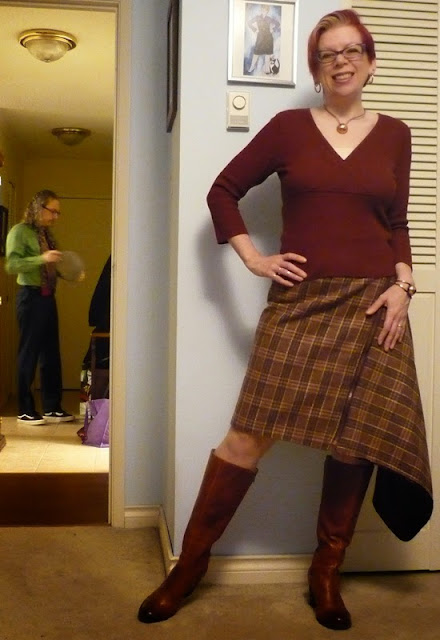 Only my jewelry remains. Doesn't L look dapper back there?
If you've been following me for long, you'll have noticed that I often do equestrian vibes in my outfits. 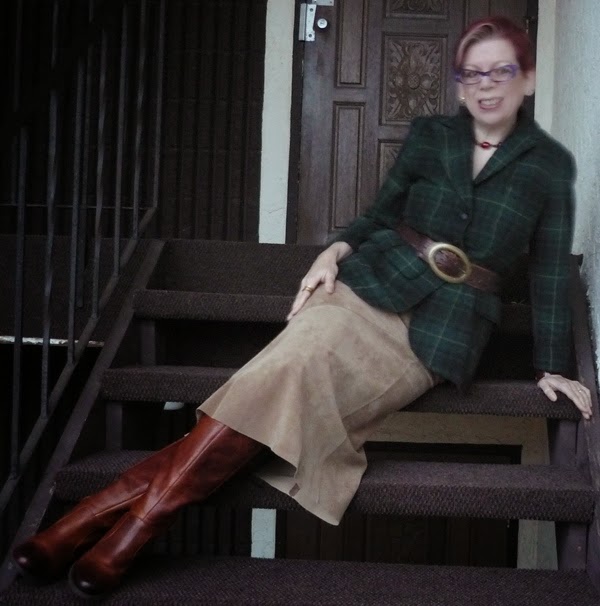 This was in January 2015 again, and I'm showing off yet another one-off: this Ralph Lauren vintage plaid blazer. Only the choker remains from this outfit.
Caro gave me this dotted blouse and Elaine gave me her old vintage suede skirt, and I wore them together in February 2015. 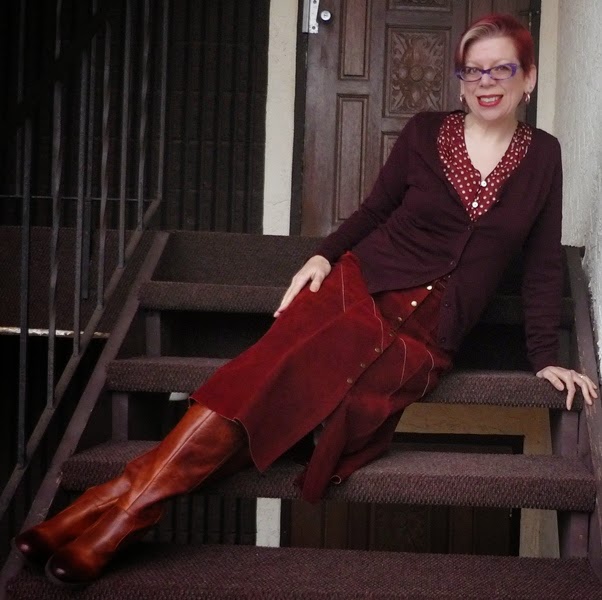 I love how all the wines and rusts work together here. I still have that cardigan!
Another equestrian outfit in February 2015.

Another round of things I no longer have. After I'd had my hair purple for a few years, I cleared out a lot of the autumn colours from my wardrobe.
Deja outfit! This repeater is from March 2015.

These boots were perfect with the skirt, as they didn't snag the fringe on the hem.
I miss this fluffy top, but it yellowed and became rather bedraggled over time.

This is from October 2015 (I guess I packed these away for the spring/summer that year).
I loved this vintage dress - I passed it along a few years ago. 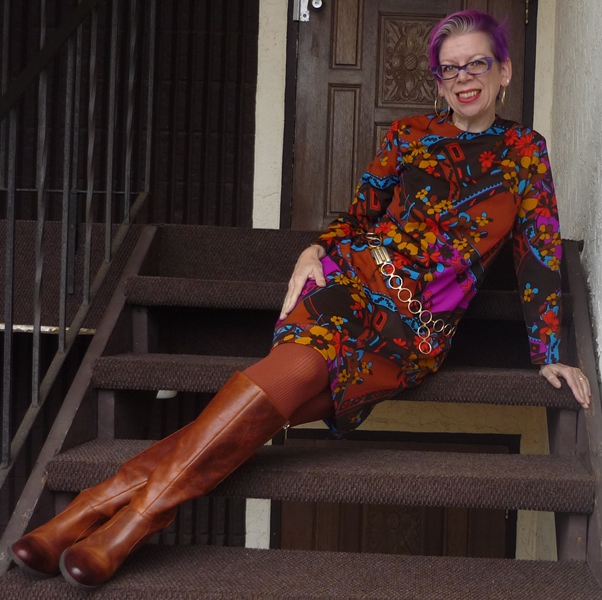 We'll be seeing it again (it's a total jammy dress), but this is November 2015.
Another November 2015 outfit, featuring the same belt as the above look. The belt is my mom's, from the 70s - I "liberated" it from her closet when I was in high school in 1983-1985, and removed the chain swags and tassels from it. Major regrets there...sigh. 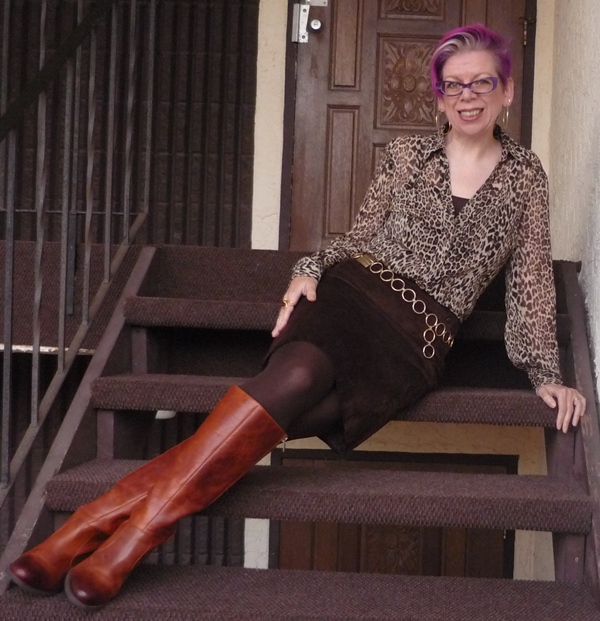 I still have this leopard blouse!
I wore the boots to Powell River for Christmas in December 2015. 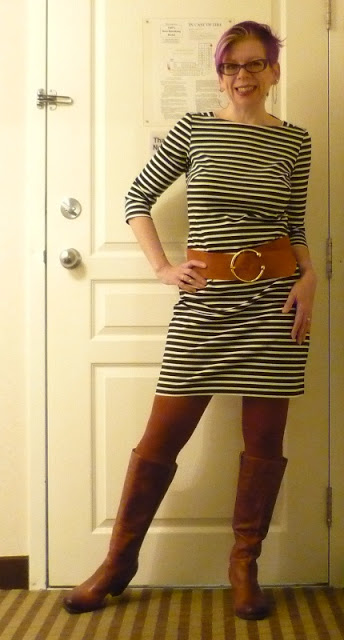 That's the caramel belt that replaced the earlier one - the Fendi one is still in my future. I am still on the lookout for another striped dress like this (this one fuzzed out badly).
Same trip, before we left.

Gotta cuddle my fuzzy boy!
You'll remember this Desigual by Lacroix dress from the Flashback here.

I still have those sparkly tights. This is from January 2016.
Same jammy dress as before - this was in October 2016. 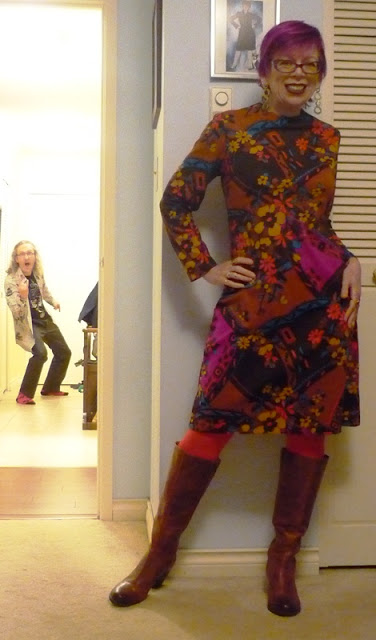 L is such a ham - Vizzini must get it from him!
I look startled here, also in October 2016 - I was having issues with the camera settings. 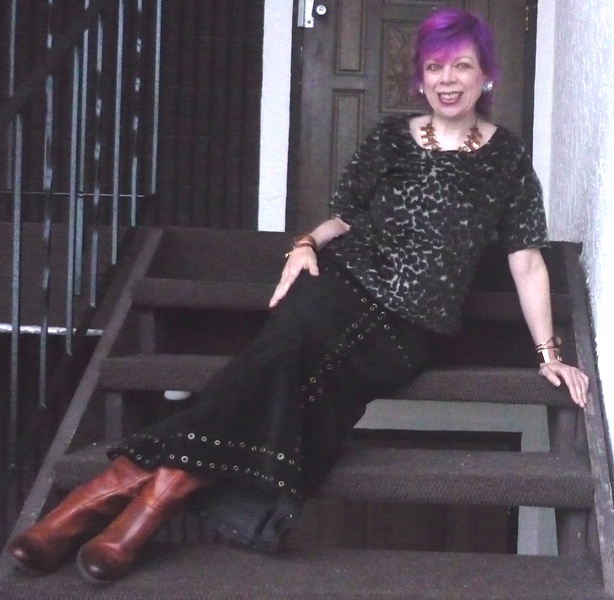 I'm also testing out contact lenses, in case you can't figure out what's different.
Return of Jammy Dress, in January 2017. 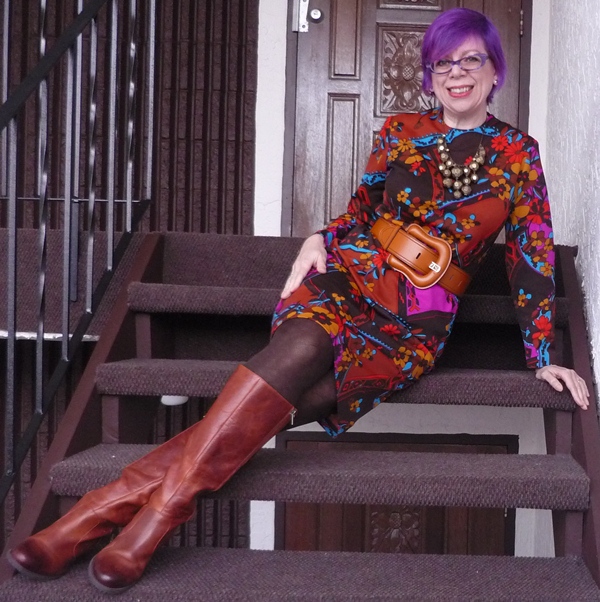 I see I've acquired my Fendi belt (Flashback here).
The belt and boots became firm friends and are often seen together. 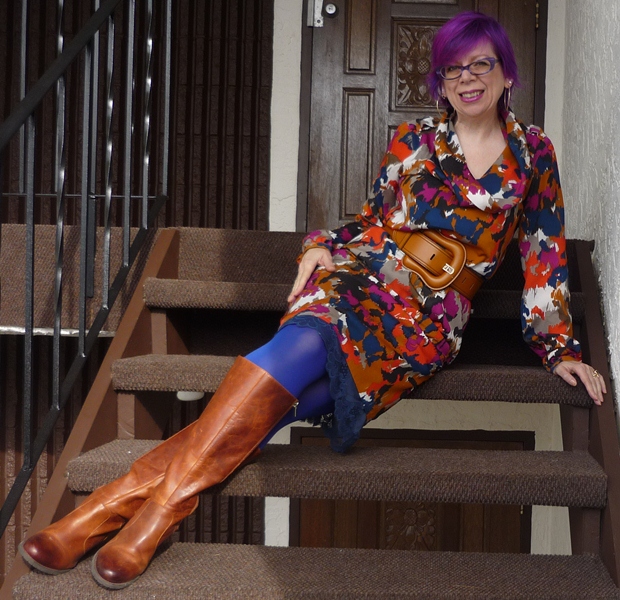 If it's January 2017 again (and it is), then it's jammy dress time! I just wore this dress and Flashbacked it here.
And there's that jammy dress again, this time in November 2017.

Yes, I have a formula going on: jammy dress + belt + boots = easy outfit. You caught me - you're so clever.
Um, I love a good thing? I do repeat outfits - but the accessories are always different!

This was also in November 2017.
My previous Monster Vest was shown off in December 2017, worn to a friend's.

I Flashbacked this Gaultier sweater here. Caro got this down-filled skirt in a giveaway - she wore it for our Zoom call last weekend!
I'm very fond of this green peplum jacket - it's currently in my spring/summer wardrobe. I wore it in October 2018 to go visit Cat/Ross' now-departed old kitty Baxter. 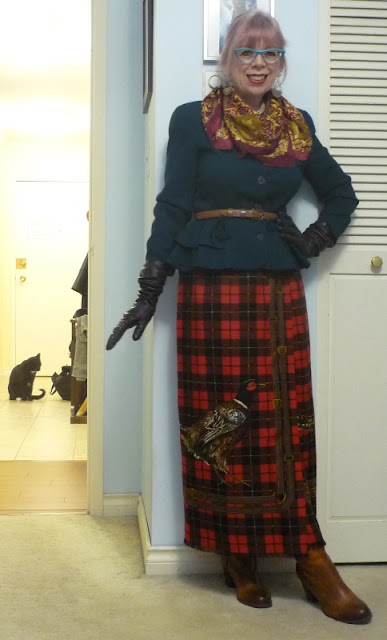 Vizzini knows I'm going to see another cat - he looks furious. This was my one and only wearing of this unlined Ralph Lauren pheasant skirt (it had moth-holes).
I love this fun outfit from November 2018. 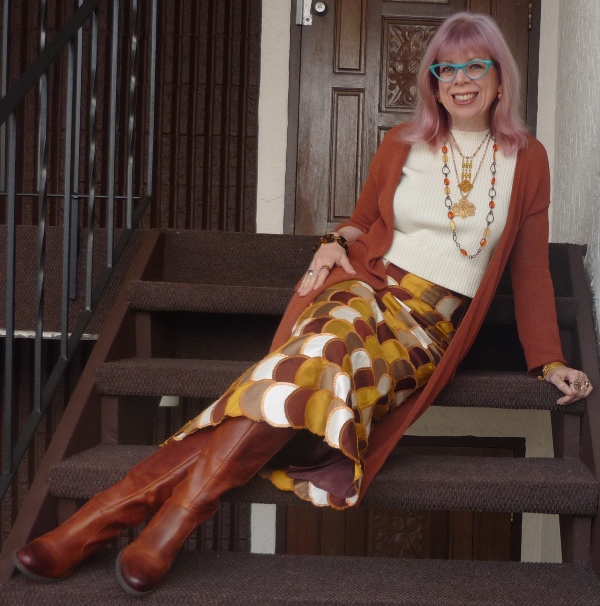 Skirt Flashback here.
This is one of my favourite autumnal outfits, from February 2019.

Velvet blazer Flashback here.
I like how the caramel brings out the bits of rust in this Kenzo dress, worn in March 2019.

I "winterized" it with my sparkly black turtleneck - it's a very fine cotton.
Oh, there's my Urban Camo jammy dress again! 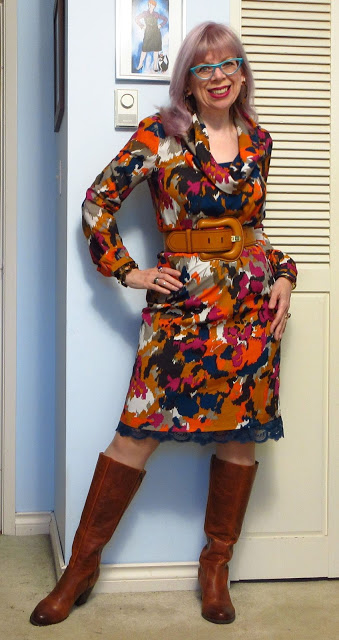 This is from November 2019, which feels like a couple of months ago, but is now over a year...
I like this texyured look from January 2020.

The corduroy doily dress is not good with layers, though. It's strictly spring/summer now.
Another favourite jammy dress in February 2020. 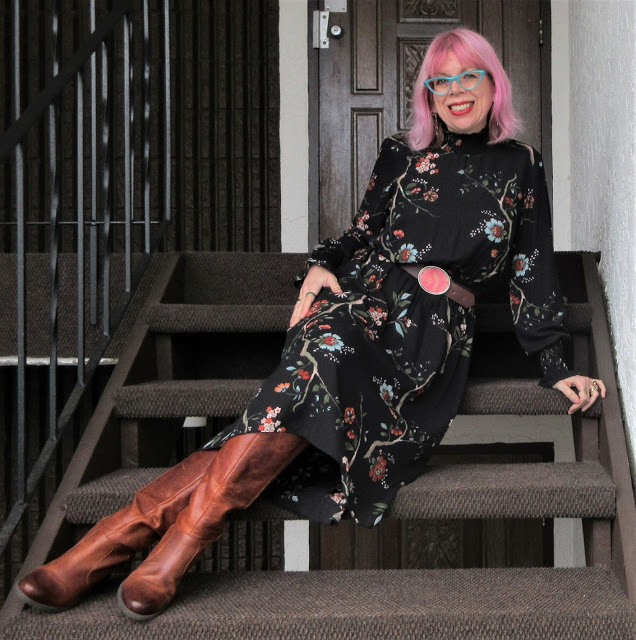 They are my favourite kind of dress (after massive ball-gowns, but you know, I don't wear those as much).
And then here's the last time I wore the boots, in October 2020.

That sweater again, plus a punk-ish vest and leather.
Mathy stuff: Well, I have surprised myself! Today's outfit is the 31st wearing of these boots! Go, me! That brings me to $6.42 per wear, and I've got plenty more wear in these, so my initial outlay of $199.00 now seems like a very good investment.
Do you have a favourite look out of these? Are caramel boots an important part of your wardrobe?
Have a wonderful weekend, my friends! I'll be back on Sunday with tales of adventure. 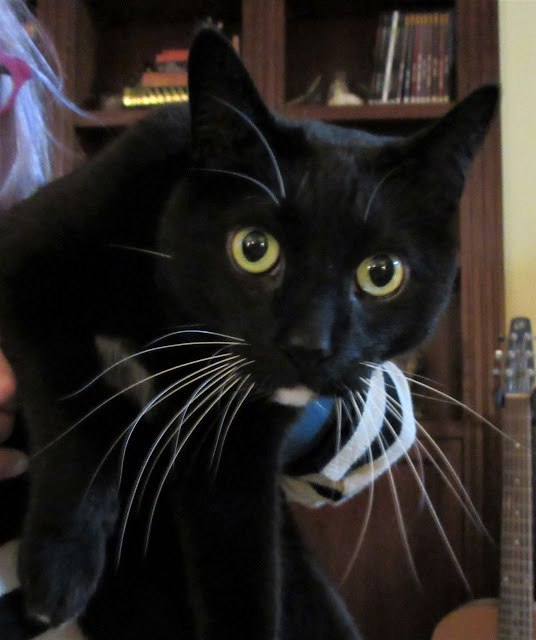 "It'll be tales of destruction unless you put me down this instant, Woman!"

Thank you - as always - for stopping by my little corner of the blogoverse. Stay calm, be safe and be kind.