Of Course, the Hallowe'en Dress, and a Danier Flashback

What do I wear to work on the last day before Hallowe'en? 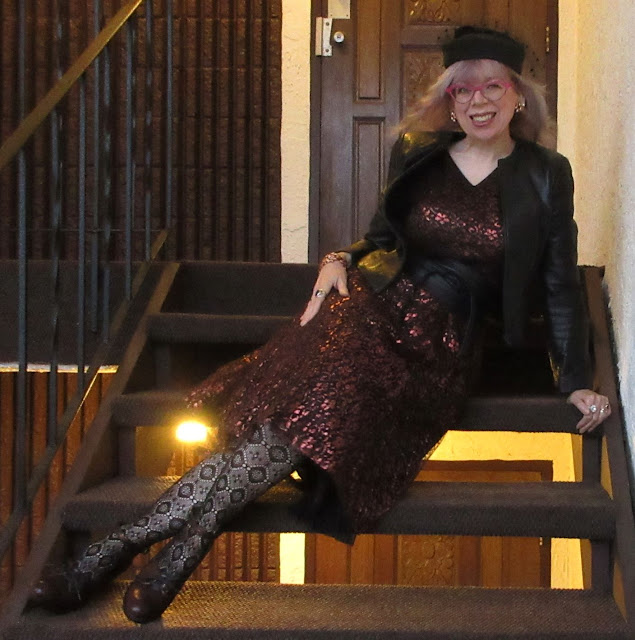 Of course, the Hallowe'en dress! As you can see, it was a very windy day.

And as you can also see, I have a hat on! I did the stair picture last this morning, and the wind sealed it - I took the hat off. So I really only wore it in these pictures.

This is a vintage straw hat that I've had for many years. Ah, I identified it here in May 2010 as being acquired in the early 90s, so there you go. I spent some time last night sewing new elastic on it, so that it would stay on my head.
But here's how I actually looked for most of the day. 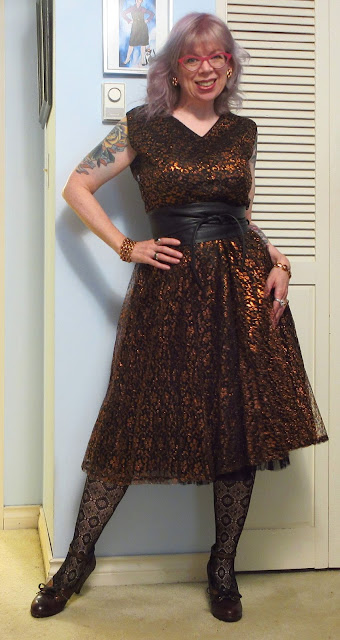 I have a black vintage slip on under this, plus my Noa Noa floofy underskirt for extra floofiness. I may have twirled for a couple of my coworkers. 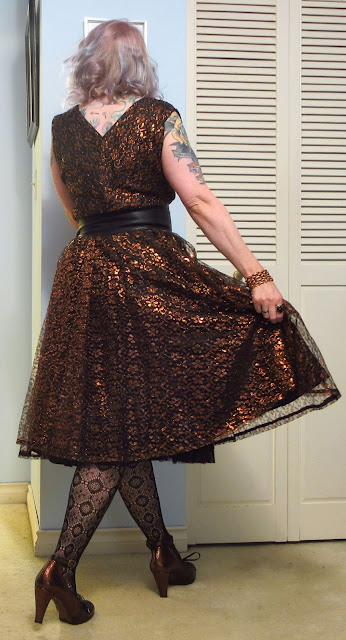 The lace overlay is a full circle, but the lining is not.
Jacket on.

This lovely soft cropped jacket functioned as my outerwear.
Masked up - my Hallowe'en mask from Lazy Susan's.

I took a close-up in the bathroom. 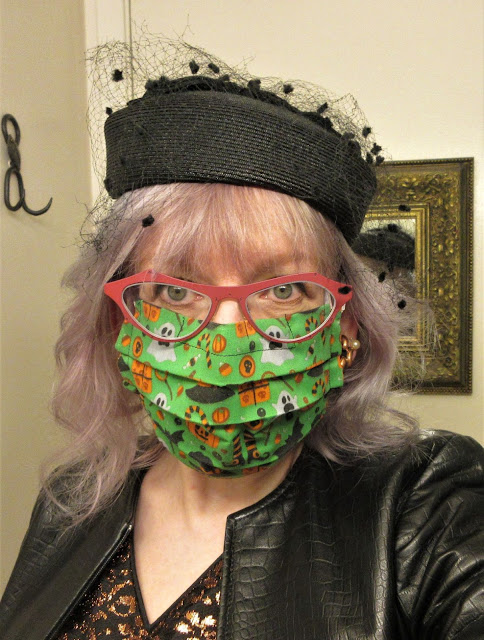 Boo! The actual scary part is that I've only had one cup of coffee! The horror!
Fully done up in outerwear mode. The jacket is a boob-smusher, always has been - we'll be doing a Flashback on it shortly.

I clipped my hair up to keep it from getting tangled in the wind.
The stuff: 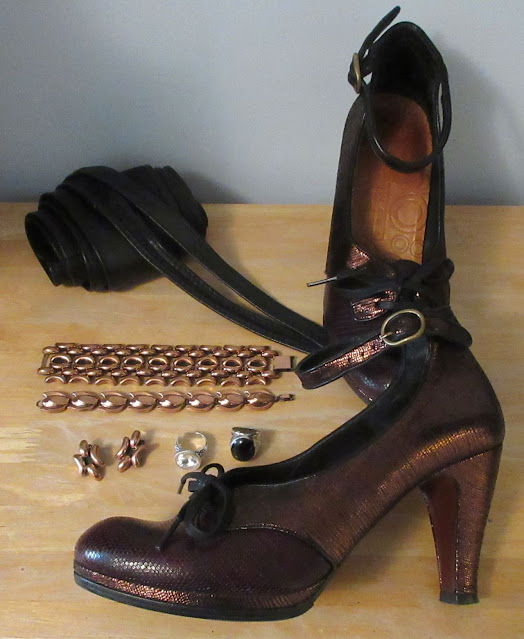 Aren't these shoes awesome? I love the two-tone of brown and copper, and the sweet laces...plus ankle straps! My heart, be still!
Copper bling: 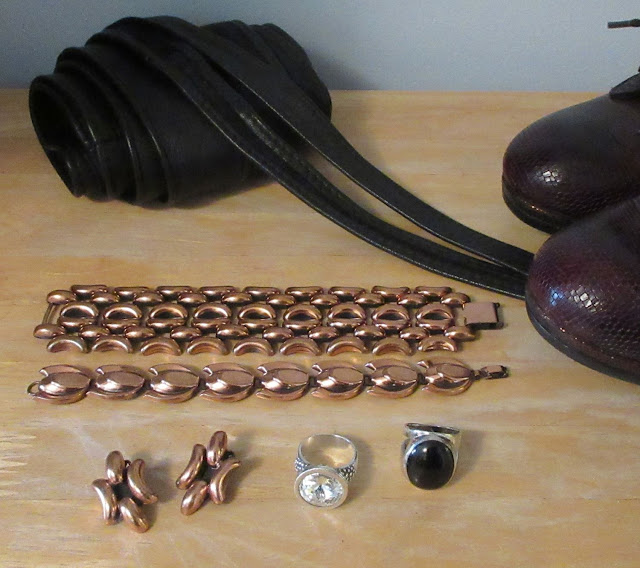 Some of my copper collection.
Flashback: Danier Couture Cropped Leather Jacket
I was shocked as I clicked all the links and re-downloaded all the outfits - when did I get this jacket? Surely, it can't have been THAT long ago! But yes, my blog archives are accurate - I bought this jacket here in September 2013! 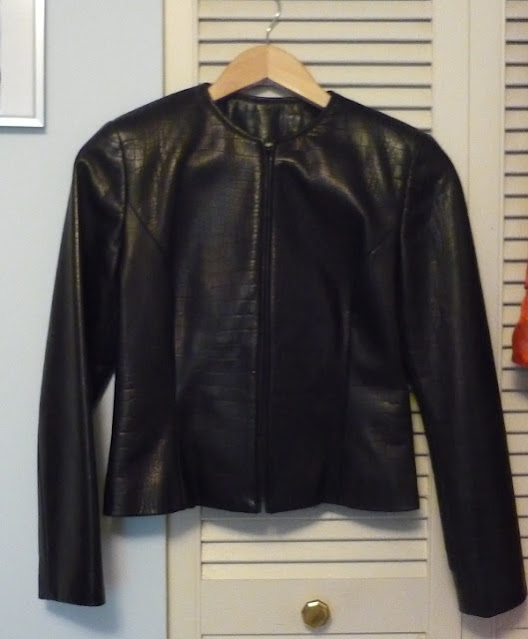 I miss My Sister's Closet (not to be confused with the thrift store of the same name in Vancouver), which was one of the best consignment stores in Victoria. I often found amazing pieces for very reasonable prices, although the $58.98 I paid for this didn't seem cheap at the time. 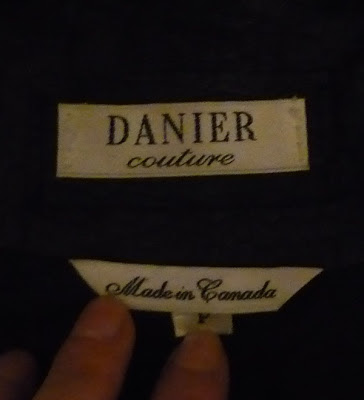 The jacket is by Danier Couture, a swanky division of Danier Leather, and is made from Italian leather. The finish is a croc stamp and it's butter soft. It's also made in Canada. As I have bought Danier new (this jacket) in the before-times, when they used to have stores, and paid $400 on clearance for my coat (it was $800 new), I knew that Made in Canada = expensive. It's likely that this jacket retailed for around $500 new or more.
I first wore it in September 2013 - there I go, wearing things right away! - along with two other items I'd bought on the same shopping trip. 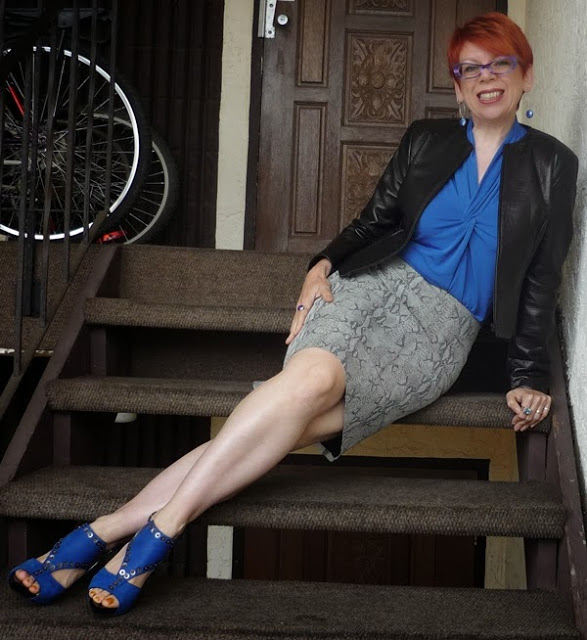 The top and skirt are both now long gone (but I still have the shoes, and I even did a Flashback on them, here!).
I followed that up a month later, in October 2013, with an outfit that I still love.

This was a pretty staid outfit for an Urbanite at the Art Gallery, but I do love all the ruffles and that hat is so fun (I still have it). Vizzini ate the lacings on those Fluevogs, little monster!
A work outfit, also in October 2013. 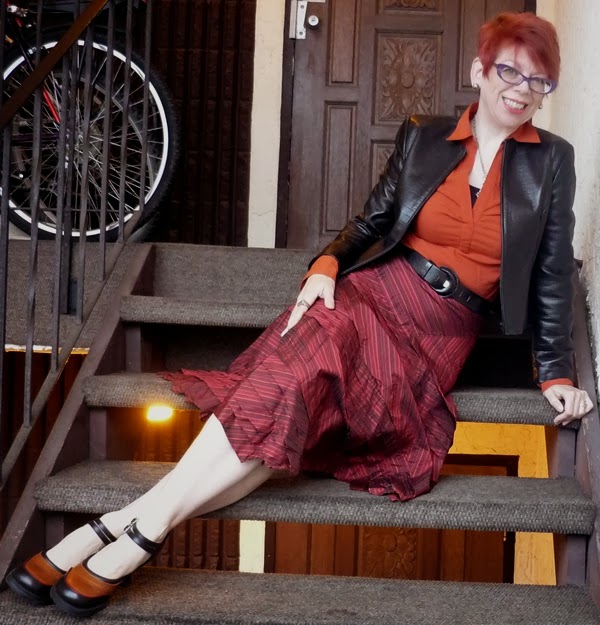 I don't remember seeing this outfit in the Mini QTee Flashback (here), though. Longtime blog readers may remember this skirt - I actually owned it in two sizes before I finally gave it up.
In November 2013, my friends nominated me for the Unlimited Woman Awards - I didn't win. 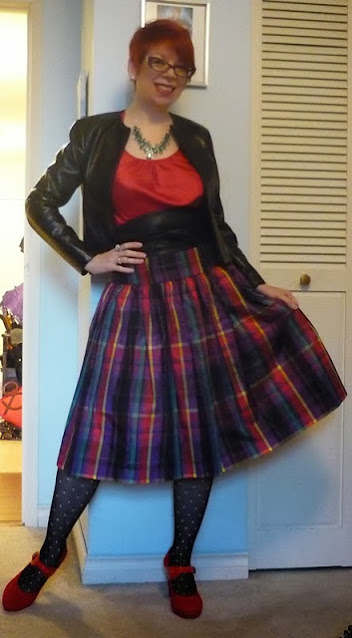 I did get to do a photoshoot, though - this is what I wore.
I dislike this January 2014 outfit intensely. I'm glad I no longer have anything but the jacket left.

My Cydwoq black shoes were in my closet a long time.
An early example of pattern-mixing here in March 2014 is nicely grounded by the simple black leather jacket.

We did a Flashback on the Half Truth Tanya Fluevogs (here) - this was one of my first times wearing them.
Another March 2014 outfit. Woo, that's a short skirt. 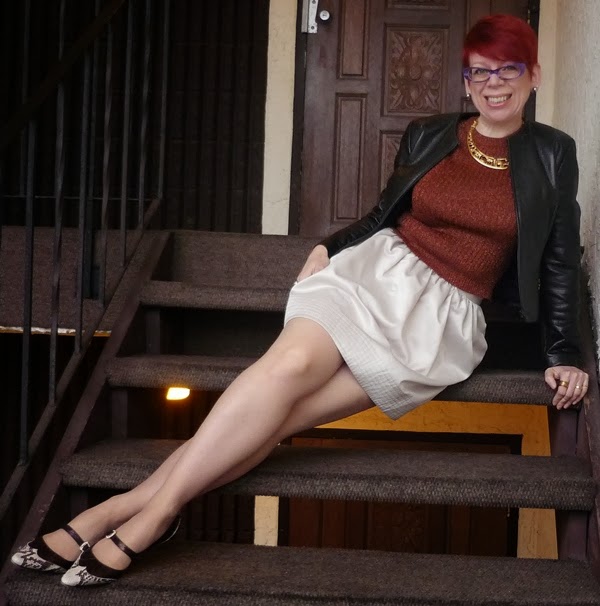 I remember liking this outfit, except for the shoes, which hurt.
I adored this skirt for years, before the lining finally tore out.

This was in April 2014. I still have that massive black chain necklace.
I'd completely forgotten about these Fluevogs from August 2014 - I ordered them online and they hurt my feet, so off they went. 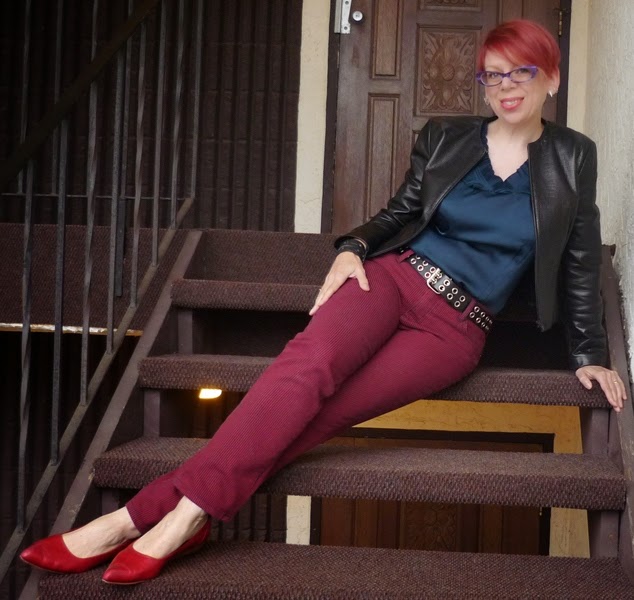 Those jeans were navy and red striped - I never liked that you couldn't see the stripe in pictures. They became house-pants until I wore them out.
I love this outfit from October 2014. So classy.

I still have the boots and the belt.
Wearing a new-to-me skirt and shoes from a Vancouver anniversary trip, in April 2015.

Only the jacket still remains.
This skirt was from the same trip, seen in September 2015.

That fringey top was utter cat-bait. This past year, I finally retired those yellow shoes (they stained when they were in storage).
This is a classy-looking outfit for work, from December 2015. 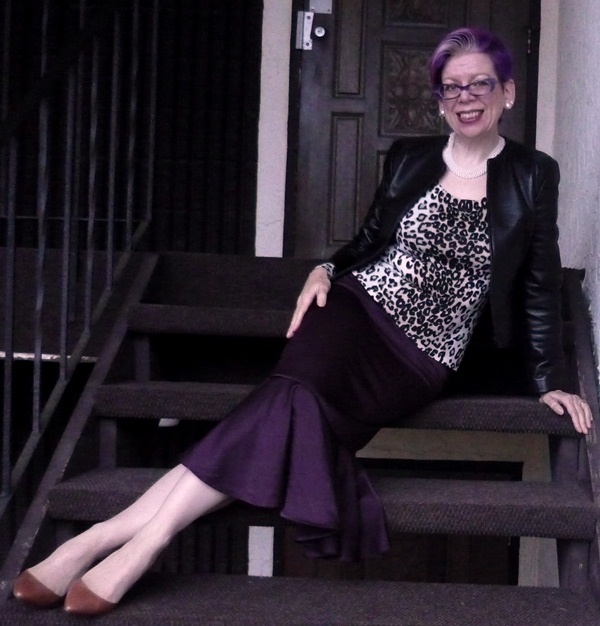 I'm a fan of mermaid/tulip skirts - I think they are so feminine and pretty.
This jungle skirt was a favourite for a few years - this look is from February 2016.

We did a Flashback on the trout shoes here.
I wore this jacket as my outerwear for our March 2016 trip to Vancouver. 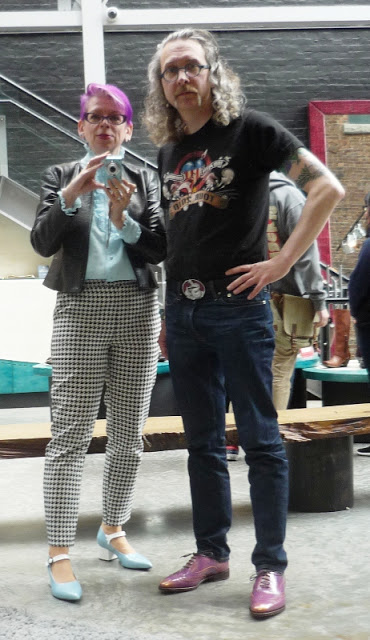 My travel outfit - L and I in the mirror at the Gastown Fluevog store. We ended up with those pairs.
On the deck of our hotel - oops, I missed this outfit in my Half Truth Veda shoe Flashback (here). 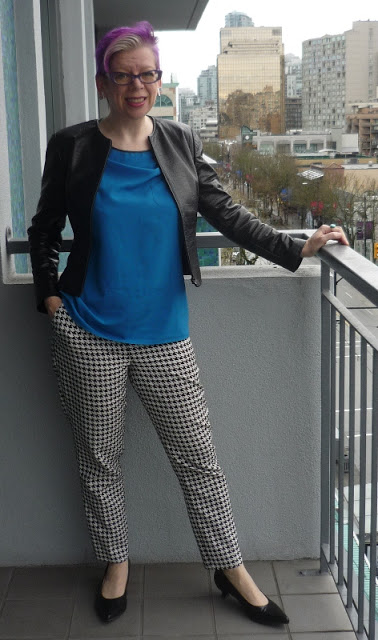 I still have those houndstooth trousers and am working on getting them to fit again (resist the Hallowe'en candy, Sheila...).
I love this fit-and-flare outfit, also from March 2016.

I'm a sucker for polka dots. I still have those shoes - they were one of my very first Flashbacks (here).
This jacket looks great with this blouse - again in March 2016. 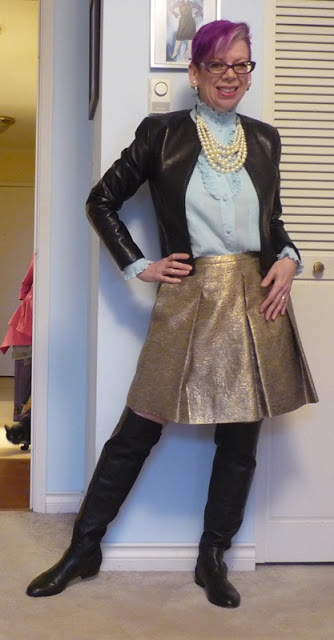 You'll recognize my over-the-knee boots (Flashback here). Do you see the kitty hiding?
Another dotty skirt in June 2016 - I kind of wish I still had one of these dotted skirts.

There's a shopping goal for me. I still have the teal shoes; they're a fave pair.
This outfit from September 2016 fills me with "meh, although I like seeing Vizzini nosing around in the frame. 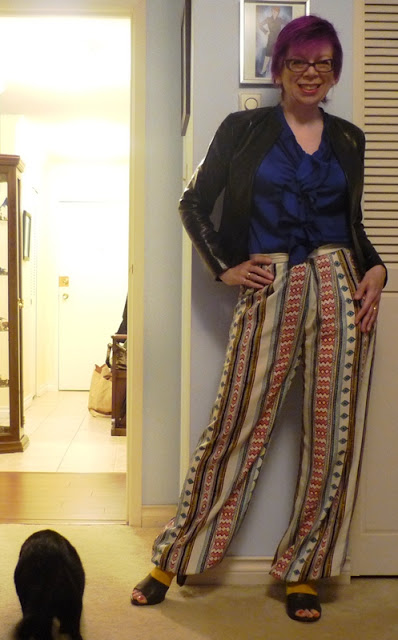 Yeah, that's just...not me anymore.
We all love the Lady Garden of Delight skirt, seen here in January 2017 (Flashback here).

I've let those boots go - they hurt my feet (they were very stiff).
Greetje, this one's for you. This is one of my favourite looks with this jacket, seen in March 2017. 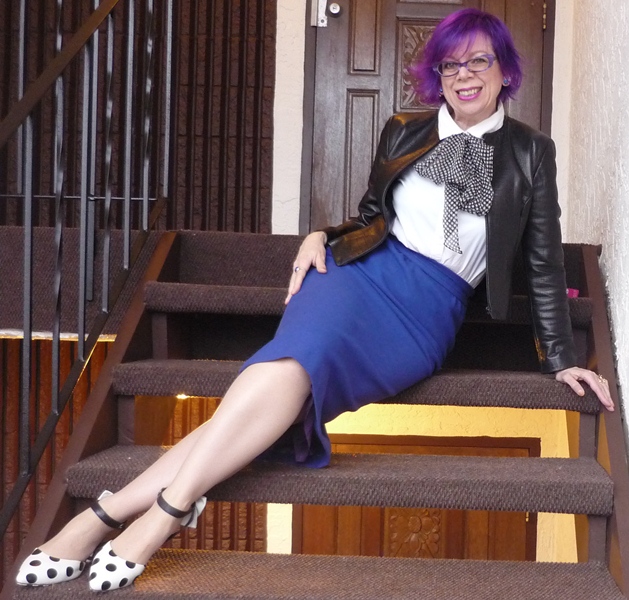 My polka dot shoes missed a Flashback this past spring, and my Real Designer skirt (Andres Courreges!) will get one at some point this season.
This was a really fun work outfit from May 2017.

That's my other leather piece by H&M - a black sleeveless peplum top - and my Avon (yes, THAT Avon) scribbly-leopard printed jeans. Those jeans were my around-the-house pants for the past 3 years, and they finally wore out.
I like this classic outfit too (another one for Greetje), from October 2017. 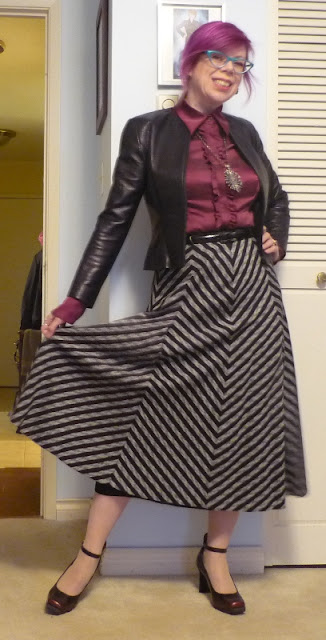 I've still got everything but the skirt. I know, I know! I can hear you all clamouring - but the skirt was full of holes, and the lining was just shredded.
I wore this to the theatre with Mom in December 2017, and was freezing (that's a sleeveless thin sweater). 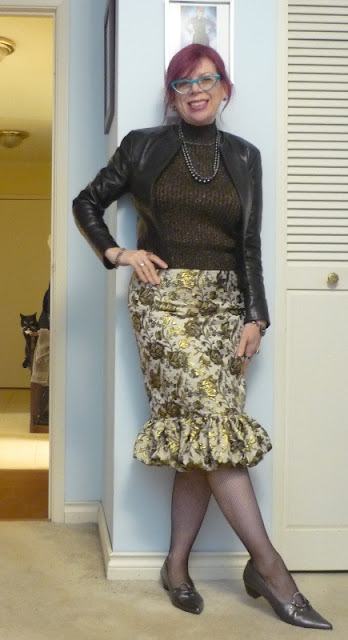 I still have everything here too. The skirt is one I bought pre-blog, and I still have it. It has no stretch, so it's in Clothing Limbo until it fits again.
My baby blues appear again here in April 2018. 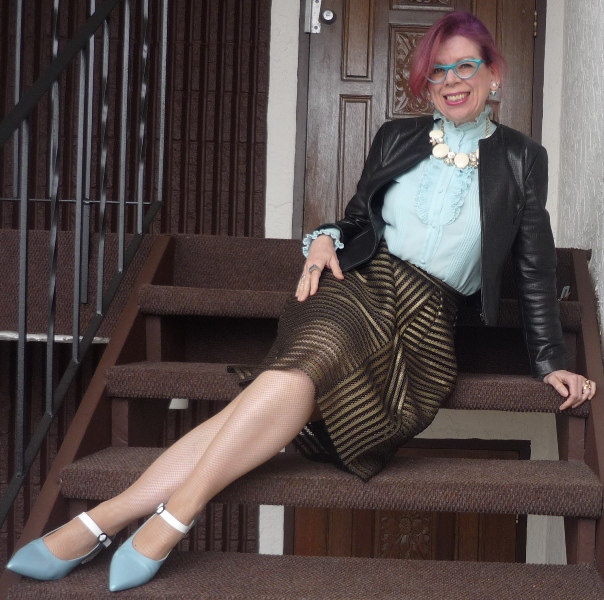 We'll be seeing this skirt at some point - I like wearing it for brunch. There's a Flashback on the shoes here.
I often wear the jacket as outerwear instead of actually part of the outfit, like in September 2018.

The shoes received a Flashback here. I'll be wearing that mustard blouse at some point this season.
The baby blue blouse again in March 2019 - I've paired it with this jacket a total of four times.

That skirt didn't make the cut (it was just okay...and didn't have pockets).
I wore the jacket over this groovy outfit just for sun protection in April 2019.

The shoes had a Flashback here.
Here it is in October 2019, with today's shoes.

The shoes are all that remain - both the skirt and top are now gone.
And here's the last time I wore it, in December 2019, with one of my favourite shiny skirts. We'll see that soon at some point!
Mathy stuff: Wow, I am again surprised, as I honestly didn't think I'd worn this jacket that much. I count 33 outfits, including today's, which brings us to a highly-respectable $1.79 per wear. Lots of wear left in it too, so expect to see it again!
Enjoy your weekend! If you celebrate Hallowe'en (or just eat the candy), be safe and be silly. Thanks so much for stopping by.
Posted by Sheila at 6:00 PM