My Forbidden Dress Week - Down a Notch in Chartreuse

And the dresses are not really forbidden, but I have a penchant for using movie titles (usually horror movies) for my Dress Weeks. You can check out some of my previous Dress Weeks here (scroll down to "Dress Weeks", duh) - I've been doing them since 2008, making this my 5th year! Holy moly, where does the time go?

Feel free to participate! Wear a dress this week!

Of course, one of the dresses this week has to be the wonderful chartreuse dress that I got in Vancouver a couple of weeks ago (trip here). 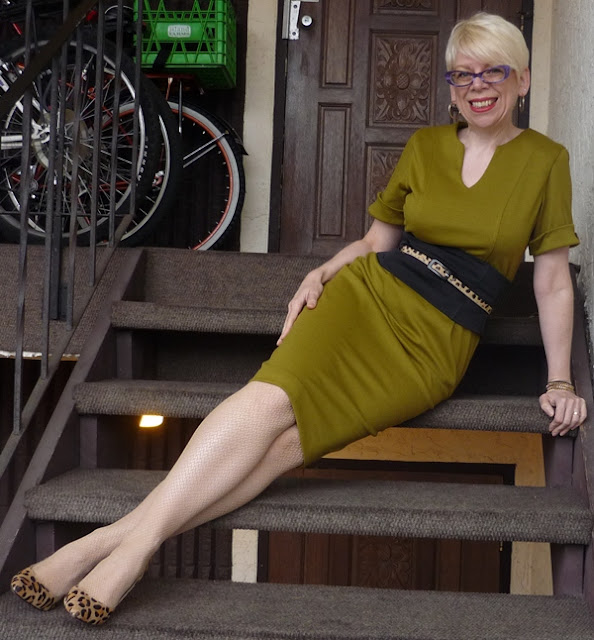 This dress today because the COO of our company for Canada came to the office and the word was that he liked very professional dress. We were warned to "take it up a notch" - for me, I felt I should maybe not do an eye-searing colour combo, or something too crazy.

I've never seen so many suits in my office at once - I have to say I prefer that over "business casual". I think we should do Formal Fridays instead of Casual Fridays!
But I digress.

I re-busted out a pair of fishnet tights so that I wouldn't blind the poor man with my fishbellywhite legs. I had to keep a little bit of my rocker/badass side by wearing my black stomacher, and my leather and chain wrist-wrap, but I thought I pulled off a classic work look quite well. I even did red lipstick.

But oh, these shoes. Look at that luscious heel. These are total movie star shoes.

They are again Steve Madden and I bought them in DSW in San Francisco back in 2006, for I think about $59.99 US. We took a weekend trip down to SF for my 39th birthday (and to watch the 49ers and the Raiders play). I was right in middle of losing weight (30 lbs down), so I'd pledged not to buy any clothes because they wouldn't fit me in a month or two. However, shoes were quite all right!

So yes, I have a sentimental attachment to these shoes. 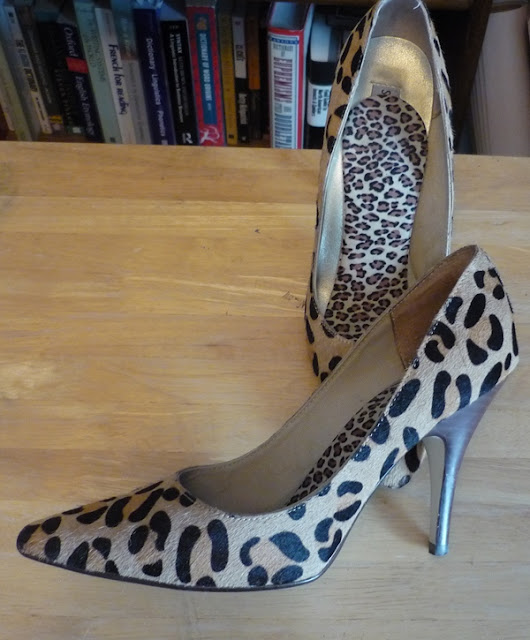 They are pony hair,and you can see that I've put leopard Dr. Scholl's inserts in them. Yeah, they are a bit tough on the feet, both in the height and in the toe-squishiness. But they fit perfectly and I did wear them all day today (12K+ steps!). And I'll be putting them on again shortly to go to my niece's recital (strings).

Although I didn't fit these into a capsule last year, I really wanted to! They just kept missing out. I have a feeling I'll keep them, just because they are the nicest quality leopard pumps I've ever seen. I suppose if I find another pair that is just as nice and is slightly lower, I might be tempted, but these do hold a special place  in my heart (and closet).

Wanna see how I've worn them before? They're one of the only pairs of shoes I have had for the whole 5 years of my blog.

I wore them in March 2011 (proving that leopard and plaid could be worn together), in September 2010 (with a bunch of items I no longer have, including a lovely wine velvet blazer), in June 2010 (with marigold cashmere), in March 2010 (doing my first stab at skinny pants), in July 2009 (doing a similar look as today with a rust dress), in March 2009 (with my rocking' vintage Gianfranco Ferre 80s skirt), in February 2009 (doing an "Elaine from Seinfeld" pose, and oh, there's my speech about Blaine), in September 2008 (with yellow and black), in June 2008 (with apple green ruffles and today's same belt!), in May 2008 (with orange and brown), and waaaaay back in April 2008 (when these shoes were the wackiest thing I owned!).

So maybe I was just giving them a little rest. Yeah, that's it.

I totally loved the chartreuse colour of today's dress, and what a coincidence, look what the postman brought in yesterday's mail!
The wonderful Megan Mae sent this to me! Thank you so much, sweetie!

It's by Silks of I.S.C. Based on the cut and neckline, I'm going to date this to about 1998-2000. I had dresses like this when I worked in Fairweather women's clothing store back then. It's a rockin' cut on me, so I'm totally excited to wear it.

Check it out, y'all: 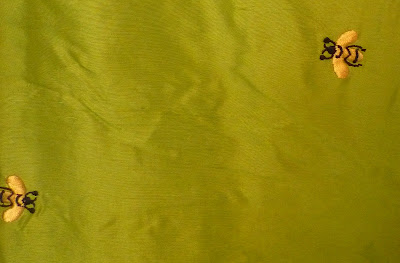 This dress is really the bee's knees.
Posted by Sheila at 5:45 PM

Email ThisBlogThis!Share to TwitterShare to FacebookShare to Pinterest
Labels: My Forbidden Dress Week