Weekend Things, Including a Blacksmith

Did you all have a good weekend? I had a very relaxing one - I spent all day Sunday watching football (for me "watching football" means I am up and down and doing things while I keep an eye on the game. I only actually sit through about 75% of the game).

I also went out for lunch and a bit of a shop with my gals. I wore this dress:

Previously worn here (and I noted that it would be too short for bare legs, but obviously, I'm over that!). There's a bit of coolness in the air now, so I have to dig out my boot collection from the depths of the closet. Anyway, this was nice and light and comfy to wear.

I read another "Walking Dead" (last one was back in January): 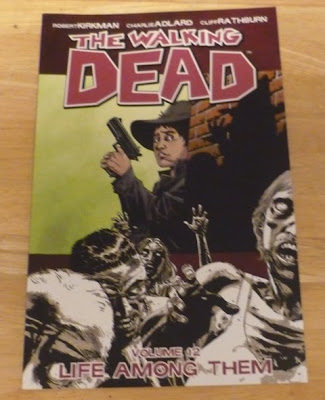 This volume is "The Walking Dead: Vol. 12: Life Among Them" by Robert Kirkman, Charlie Adlard and Cliff Rathburn.
Stats: It's a graphic novel, so it took about 40 minutes to read. I started and finished it on Saturday, September 11, 2010.
Blurb: If you've read any other "Walking Dead", you know the basic plot: zombies have taken over and a rag-tag group of people are trying to survive and find safety. Lots of people (and zombies) die, in gruesome ways. The series starts out like the movie "28 Days Later" (which L and I just watched again recently), but continues on, and on and on (hey, we are at 12 volumes, after all). This particular volume is a change of pace and brings in a large new set of characters...but the "to be continued" at the end is frustrating, as I've been accustomed to how each of the graphic novel volumes wraps up neatly at the end. I can see several key bits that will be playing out in the next volume (due for release in November, so maybe I'll get it for Christmas, hint, hint, L!).
Part of my 25% of non-football watching yesterday was spent doing some painting. I've taken quite a hiatus from my painting over the last few years - I used to spend several hours a week on it, completing 1-2 figures a week. These days, it's months between them. I've also been working on a very large project that I hope to get finished soon...it needs about 6 more hours of work, though, before I'm done.

Anyway! This guy has been sitting patiently waiting for me to finish him for some months: 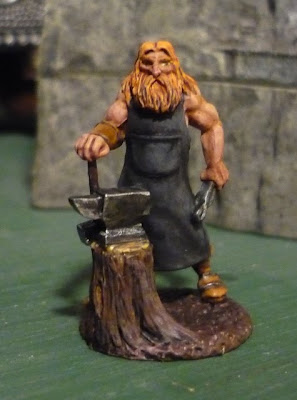 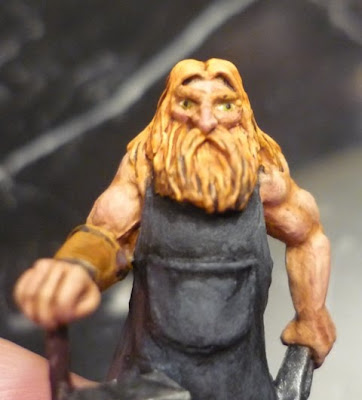 The eyes are the hardest to do on these figures! Neither L nor I use a magnifier to paint, so this is all done with the naked eye. I had to redo this guy's right eye once, as I blopped a gob of black paint when I tried to do the pupil. Arg. That's the worst - you're so close to finishing and you have to redo! 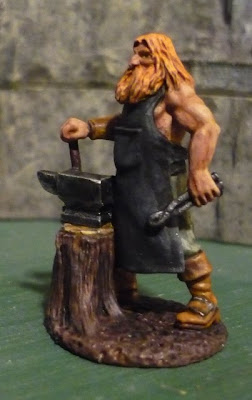 Hammer, tongs and anvil - all set for some smithing. 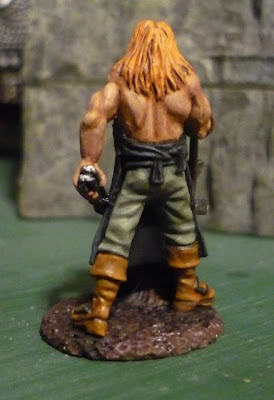 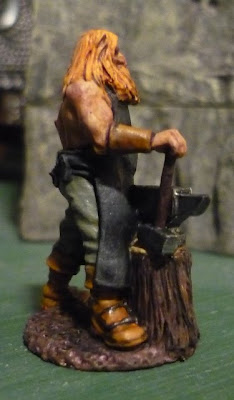 He will make a good addition to our Christmas village this year. I can't wait to get it set up and take some pictures of it. 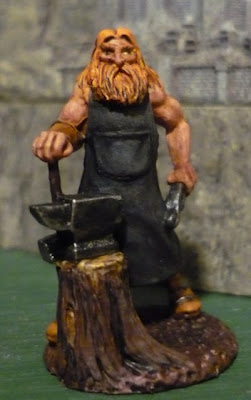 This figure probably took about 6 hours total, from start to finish. If you're interested in seeing some more of my painted figures (I've posted lots of them over the years), click here.
Posted by Sheila at 7:42 AM