Plaid Cow in a Vest

I have been a cow lately. Very cranky, very up and down. I could blame the full moon, but really, it's just been a stressful year (and doesn't look like it's going to get any easier). Just a few of the good and bad things that have happened in the past 5 months:

- our condo roof is being repaired at enormous expense (has been ongoing for months);
- my beloved cat Othello died;
- we went on holiday with my mom;
- L's grandma died;
- I'm being laid off at my job;
- my brother fell off some scaffolding at work and broke two of his ribs;
- my aunt (Mom's sister) is in a homeless shelter (she has a mental illness).

Yesterday was the anniversary of my dad's death, too (which was another awful year like this one). We're also travelling again in December at some point, and will likely get a kitten if this roof work is ever done. Add the job hunt to that, and my extreme fear that being out of my routine due to being off work will lead me to stuff my face and gain back all of the weight I lost...and MOOOO!

L, I apologize to you now for being such a cow sometimes. I don't know how you put up with me.

But this isn't a plea for sympathy, really. I just wanted to explain that if I seem negative (I can be a terrible negative Nelly at times) or cranky, I don't mean to be...stuff just gets to me sometimes.

So when I'm feeling down, I always try turn to something I feel good in:

I love this plaid dress. I've had it for a couple of years and have worn it a lot (last worn very casually here, but last time for work here (and there are bunch of links to other outfits there)).

I picked up these shoes on the weekend - I walked into the thrift store and there they were. They're by Feet First (which I recently discovered is a division of Aldo), same as these sweet blue suede shoes. I paid $49.99 for my blue shoes - on sale - so I'd guess these would be minimum around $80 new. They didn't look like they'd ever been worn - and they were $18! Score! 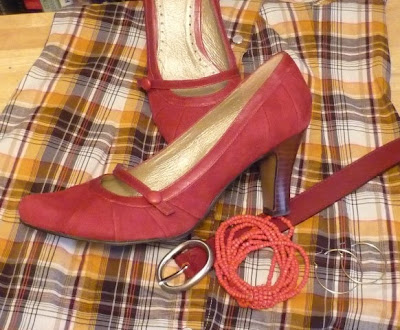