Ah, where does the weekend go? I had a lovely pleasant couple of days with L, friends and a little "me time." Hope your was fab!

For Saturday, I did grey and black. 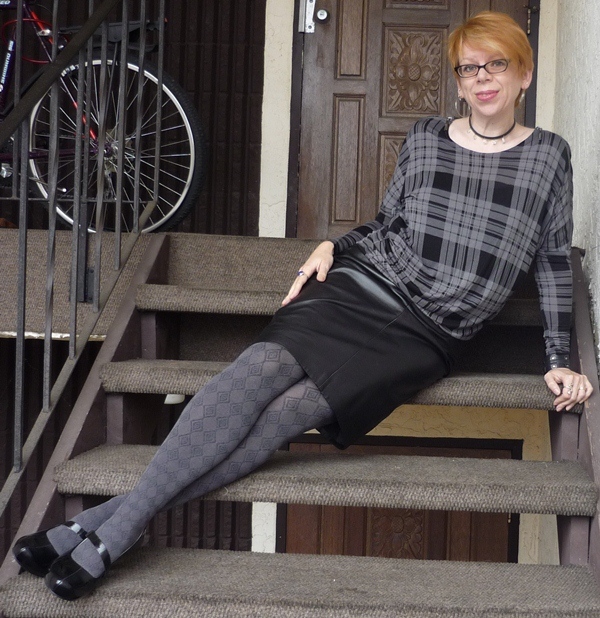 The plaid top is actually a dress! It's a very thin t-shirt material, so I pulled it up and just bunched it at the waist. The dress is another item that I bought on clearance at Plum when it closed out a couple of years ago. It's by Kensie and it was $23.

I first wore it here (with my "teeth" necklace) in January 2011, and after that I've only worn it twice: here in March 2011 (my second day at my job, breaking in my coworkers to my style), and the last time here in October 2011 for my birthday weekend.

The skirt is a new-to-me Danier Leather one that I bought in August at the Velvet Crease for $40. I loved the shorter length (compared to my other Danier Leather black skirt), but the hidden adjustable zipper at the back (for walkability) snagged like mad on my tights, which was hugely aggravating! I had to wear it with the zip all the way down, but even then it still snagged. Arg.

The shoes are my Tsubo Acreas. I bought them at the Cobbler for $100 in Feb 2010, first worn here with a grey dress I no longer have (and I'm getting all het up about a comment from someone, eep, man, I just let those go now!).

I last wore them in December 2011 with a party-ish dress. Previously, I also wore them in August 2011 with last month's red cardi and my grey chair skirt (that hasn't appeared in a capsule yet!), in June 2011 (3rd outfit, following  my crow tattoo, which is why I wore a week of vests - aw, look at how small Vizzini is! Oh, and our dear Inigo...), in January 2011 with my jammy dress (also not yet featured in a capsule), in May 2010 with another grey dress I no longer have, and  in March 2010 (with a video of my closet and Inigo! check it out).

Let's move on. L and I went for brunch on Saturday, then had a wee shop for a birthday present for our dear friend Casey. I wore my olive green suede jacket and my cross-body bag.

The jacket is cool, but I don't wear it that much. It has to be worn zipped up, otherwise all that collar flappage gets all up in my grille, yo.

I wore this same outfit over to Casey's place last night - us, and a bunch of friends brought potluck for dinner and we had a nice time hanging out with Casey's wife and fam. Good times. 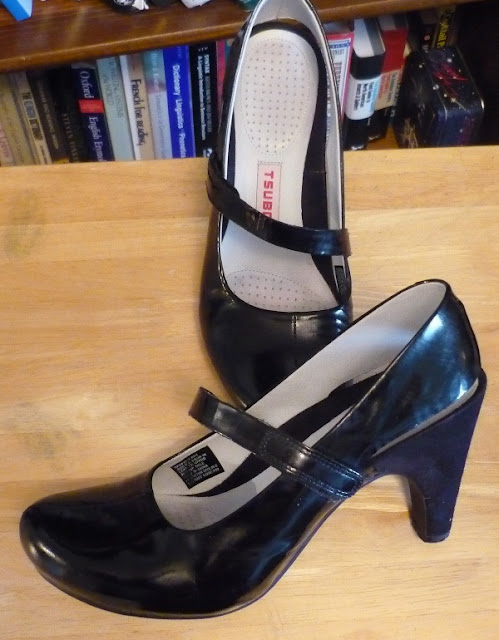 I can tell y'all right now: these shoes are GONE after this month. They are hard, they rub and push in bad places and they are not comfortable. I won't miss them. Fie on them! 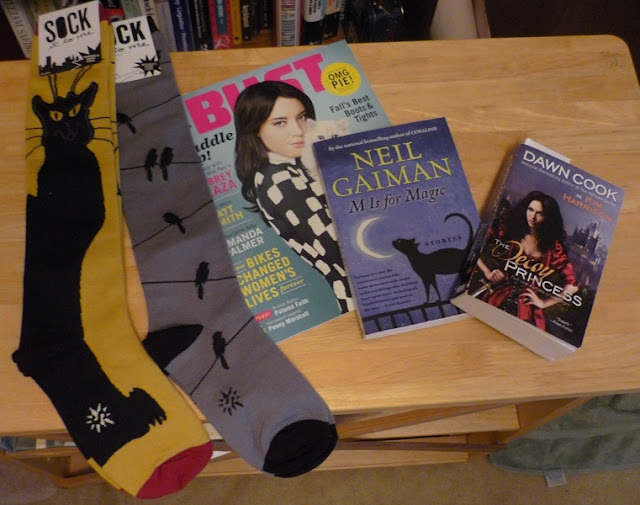 I may have shrieked when I saw the "Chat Noir" socks in the window at Oscar & Libby's (I just love that store!). Joni at Walking Colors wore a pair of these just the other day here and I was agog! Aren't they amazing? L bought them for me, along with the bird-on-a-wire grey socks.

L also bought me Bust Magazine (love it, check it out!), and I bought myself that Neil Gaiman book of short stories and the Kim Harrison (writing at Dawn Cook) book. I am a sucker for fantasy lit!

Today, the time change messed with me and I got up really early and worked on the October recap post (it's up, check it out!). I also dyed my hair, which really needed it. 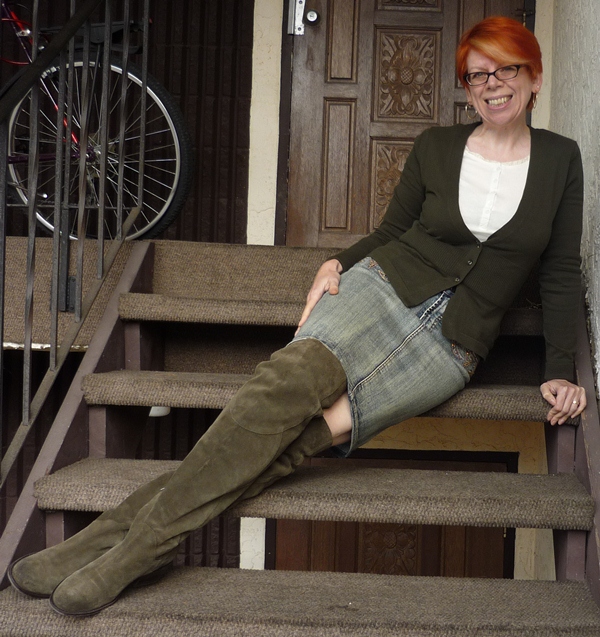 I got groceries then walked over to the Velvet Crease (hello! love your store!), and had a nice little browse around. I'm also linking up today's outfit to "Visible Monday" over at Patti's Not Dead Yet Style - go! Now!

This cardigan is new - I bought it here from Dots in August for $24.99. It's a good basic neutral - and yes, I'm counting olive as a neutral this month.

The cream top is one of my cotton/spandex layering long-sleeved tees. It's not part of the capsule.

The skirt is by Cache and your eyes do not deceive you: it's acid wash!

I spotted it at Value Village in June 2010 (2nd outfit, past me and my gals) while killing time before meeting up with the Winesday Core Four - it was $7.99.

I've also worn it here again in June 2010 with a very frilly blouse (no longer have it), in July 2010 (with snakeskin shoes that I just got rid of) and then not again until April 2011 (aw, pics of Inigo on the scratching post)...and apparently that's it! I haven't worn this in well over a year!
Of course, the boots are highly distracting, aren't they? I bought these with birthday money while out with my niece Zoe a couple of years ago in October 2010. They were $250.00 and are by Pegabo.

My requirements for over-the-knee boots then (and now) were: must not be pirate boots and must not be hooker boots. There's a bit of a self-examination there about thigh-high boots and a mini skirt and how age appropriate both are to me at the (then) age of 43. I'm pretty much over that. I wear what I want!

You'll be happy to know these lovely olive suede boots no longer stink like they did when I bought them, and have become soft and slouchy. They're quite warm, so they only get worn in the fall/winter months. I last wore them in January 2012 (here with stripes), and previously in November 2011 (again with a mini), on St. Patrick's Day in March 2011 (with last month's green sweater), earlier that March with skinny jeans and a frock coat, in February 2011 (with purple, and a rant about "literally," hee hee), in December 2010 (past the pics of our trip to Florida), and in November 2010 (with a blouse that I love but haven't worn yet this year).

Although it was warm-ish out, I needed another layer. I've been having fun digging in my collection of suede and leather jackets:

This one was picked up while on vacation visiting L's folks a few years ago. It's not the greatest cut or quality, so I'll probably pass it along at some point. As outerwear, it's not part of the capsule.

And yes, I did find a few things at the Velvet Crease! I just mentioned in my October recap that I needed a dark red/burgundy top, and lo, I found one: 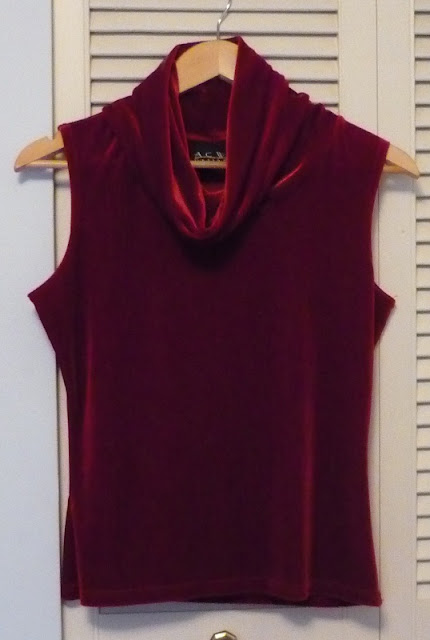 It's by ACW Design and is made in the USA. It was $24.00. I love that stretchy soft velveteen! 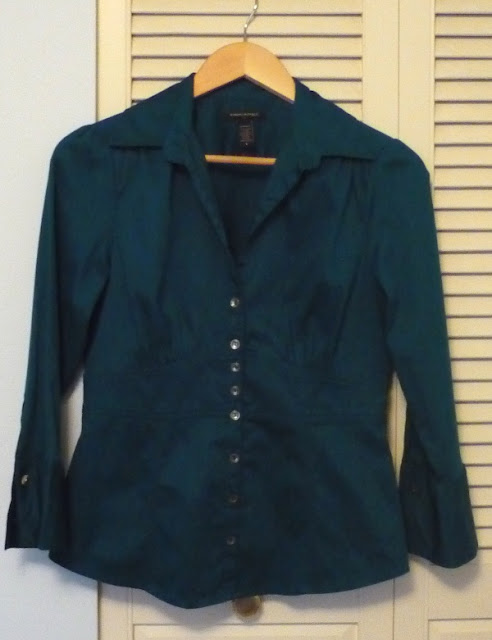 It has gorgeous under-bust seaming and 3/4 sleeves with those button-through faux cufflinks. I am going to have to dig out some of L's good cufflinks to wear with this! It was $28.00 but it's Banana Republic, so I'm pretty sure it sold for a lot more than that new. It's from Fall 2010, according to the label.

I was really excited about this piece, though! Shopping second-hand is so much better than new - I would never find anything as cool as this in a mall!

It was marked as a jacket, and it's definitely meant to be worn over clothes, but it's made like a wrap dress, out of a very stretchy thick t-shirt-y/sweatsuit material. It's black with contrast stitching. The front "skirt" is open to the waist, but the back goes down nearly to the ankles. The neckline is very wide, nearly off the shoulders.

The label is Kania (I intended to link to their site, but it doesn't load properly, arg), which I've never heard of, but is apparently Canadian - this jacket is marked "Made in Canada." This is the Goddess Wrap, and here's a picture of it in white in this article*. Ah, here's* a picture of the black one! Cool, eh?
*linking 'cause I love, although I would have preferred to link to their actual site.

A fun weekend! Hope yours was great!
Posted by Sheila at 5:25 PM