First off, thank you to all the lovely people who read and follow my blog! I hit 300 followers today (not that such things really matter, but it's such a nice round number) - after nearly 5 years of blogging, I'm proud of the fine quality of my friends in the blogosphere! Thank you!

Ooh, I love the first weeks of a new capsule! So much fun stuff to wear! 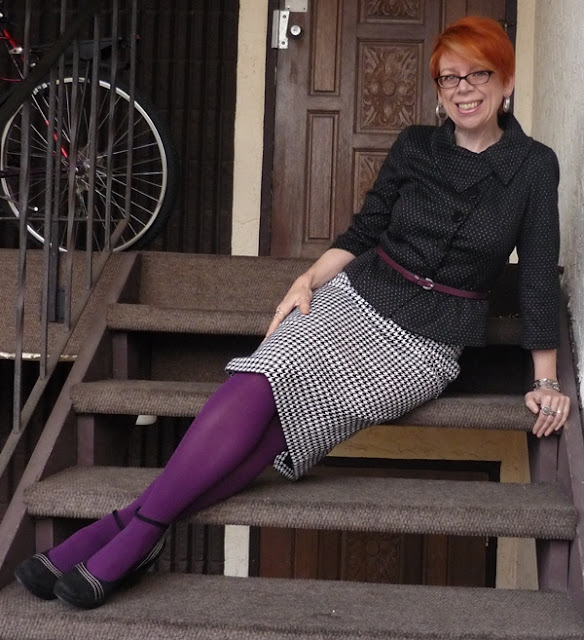 Today, we have this lovely black jacket by Precis, purchased on consignment back here in September for $30. The white dots are actually little bitty Ws - or maybe they are wee flying birds? Anyway, I love how the jacket's front is slightly angled, and the way the collar lays. It doesn't work undone, but it works lovely as a top.

The skirt I've had for oh, a very long time, since about September 2008. Here I am with whack-a-doo hair!

It's a classic and I love it. The quality is superb and the fabric is nice and thick. And who doesn't love a great houndstooth skirt?

I'm wearing the Bata shoes again (last seen here) - but with purple legs so you can see the ankle strap! It's much easier to see in the first pic (darn this loss of natural light!) - and my legs match my purple skinny belt. 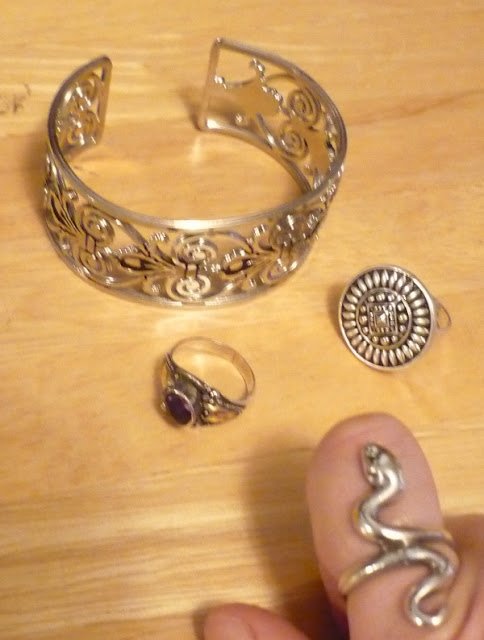 The ring with the purple stone was a gift from Mom & Dad back in the 80s. A little more homegrown vintage!

It's gotten too cold now to keep Vizzini's scratching post out on the deck, even though our deck is enclosed. We've had to move it inside, but we made sure it still had a view.

This morning, I followed the meowing:
It's not too chilly during the day, however, so I open one of the doors enough for Vizzini to go out.
Officer Vizzini patrols the neighbourhood, noting every leaf, squirrel and raccoon (and shopping cart person). He meows at everything, constantly.

He suffers me petting him while he's "on the job."
However, I was thanked quite well with lots of leg rubs and purrs. And yes, he's a little monster when the deck door gets closed at night!
Posted by Sheila at 5:29 PM

Email ThisBlogThis!Share to TwitterShare to FacebookShare to Pinterest
Labels: 30 For 30 For 12, November