Happy Friday! I stopped for a little shop and a slice of pizza and a beer on the way home, and I was soaked from the rain and it was nearly dark when I made it home, so no stair shot for you!

Instead, I offer my lightened morning shots (when it is also dark out).

I was shocked at how flattering this maxi skirt was when I first tried it on at My Sister's Closet back in September (here, way down at the bottom).
I paid $18.98 for it - it's 100% knitted wool and is not lined (I have a slip to the knee on), and there is no waistband, just a narrower "cuff" that folds over. I also get a kick out of the sizing: XL.The brand is Animale, which I've never heard of, but they are based in Bali, and are known for high-quality sportswear with a professional twist. I can see it - this is a gorgeous skirt.

The jacket was also acquired at My Sister's Closet, back here in July (scroll down past my lovely warm summer walk - I miss summer!). It's by Alison Wonderland*, the same local maker (Vancouver) as my chartreuse velvet jacket that I wore in the May capsule, and was $18.98.
*I link because I love - I love locally-made clothing!
I really liked how it almost looks like denim, even though it's a linen-look weave.

I'm wearing this animal print top that I bought on consignment at the Velvet Crease in August, here. It was $22.00 and is by Spense. I had planned to wear just a plain top underneath, but I liked how all the colours helped pull the shoes into it.

Speaking of the shoes, check these babies out: 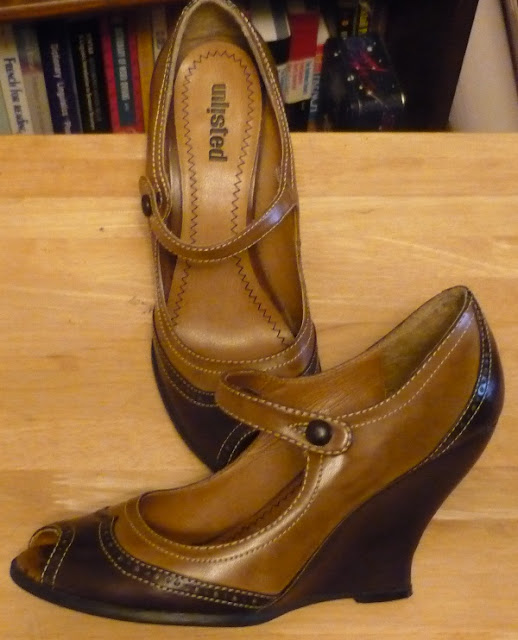 I got these at Winners pre-blog, so about 6 years ago. I recall that they were on sale really cheap, maybe about $19.99. They're called "Pumpkin Pie" and are by Unlisted.

I've worn them a LOT. Feel free to get a dose of nostalgia!

I last wore them a year ago, during one of Megan and Keely's Fashion Challenges, in October 2011. Before that, I wore them in May 2011 (with bright red tights!), in February 2011 (with two pieces from the October capsule), earlier that February (and again with a menswear look), in December 2010 (with a rust dress that I grew to despise), in September 2010 (that suede maxi is one of my prized possessions), in February 2010 (with my fabulous Smoking Lily dotted dress), in January 2010 (where I rant about the X stitch on slits in clothing), in May 2009 (in my floaty painty skirt - aw, I miss that. I regret getting rid of it), March 2009 (yet again with a menswear look), earlier March 2009 (ha, the only thing besides the shoes I still have in that outfit are the tights and the belt and the bracelet), in December 2008 (now we're getting back there - I'm in my cowgirl plaid dress), in October 2008 (yikes, with my fake leather pants, before I got real leather pants), on my birthday in October 2008 (aw, with this year's Hallowe'en suit!), September 2008 (what is up with the menswear and these shoes?), and in August 2008 (awkward pose much?).

Here is their very first wear on the blog in July 2008 with an old favourite wrap dress.

I love the inward scoop of the heel - it actually balances them really well under my heel, so that even though they are technically a 3.75" heel, they are very comfortable and secure to walk in. I wish they were leather, but they've held up very well for so much wear over 5 years. 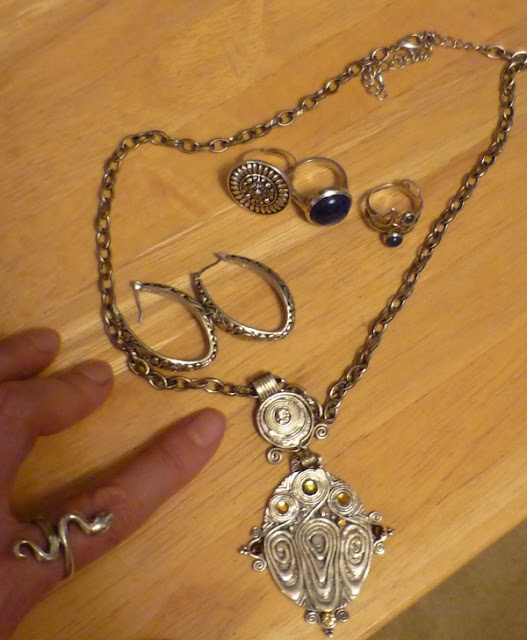 Some old favourite pieces. I wore the silver disc ring on my thumb.

I popped into the Patch on the way home. I found a few things to try on/ponder: a black leather Danier bag for $36.98 that I carried around and then put back (not the right shape for me), a J. Crew olive silk skirt (not good enough quality), and a red leather skirt (too bright, too 80s).

I did end up with this lovely Danier suede skirt: 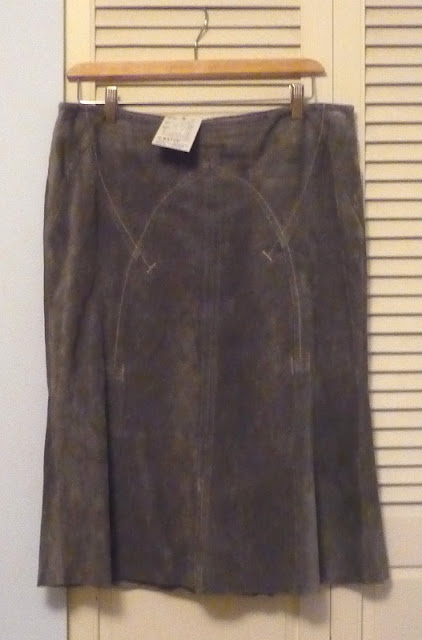 It's a very plush suede, almost like velvet in the texture, and you can see the nice seaming. It's sort of a mermaid cut, and sits very low on the hips. I think it's from the 90s, around the same era as my olive maxi skirt, which is also a low-rider. It's a very rich grey, not too pale, not too dark. It was $36.98.

Hope you all have a great weekend!
Posted by Sheila at 7:24 PM