Adding a routine to one's week really eats up a chunk of time - it usually takes me 30-45 minutes to do a blog entry, and now L and I have the gym three times a week added on top of that. It feels good to be getting stronger, but I miss the extra time!

Anyway, enough of my whining, here's the blue and white blouse, back for another kick at the can.
Thank you to whichever commenter had the brilliant idea last time I wore this blouse to pair it with yellow. I can do that! I love this bright yellow skirt, and the blue-purple-y shade with it reminds me of irises, which will be blooming at some point.

I did try a little harder to make this blouse work this time; tucked it in, did my usual hourglass shape instead of no-waist, added more colour. I last wore it here.

Blue/White Sheer Blouse (Elie Tahari for Nordstrom)
I wore the skirt twice in the September 2012 capsule (recap here), but it's been a favourite ever since I got it. It's in the dry-cleaning bag now, though, as I got a few dirt marks on it at work today.

The boots are my Libby Smith Bellevues that I wore three times waaaaay back in the February 2012 capsule wardrobe (recap here) - I've missed them so much! I'd planned to go with a "safe" black shoe with this outfit, but once I started playing with the accessories, I realized that I could pull a minor neutral (tan) in with the one major neutral (black) and it could still work. Hurray!

The jacket is my classic "boyfriend" blazer that I thrifted a couple of years ago. It featured heavily in the July 2012 capsule (recap here), where I wore it 7 times. My love for a classic black "throw it on with everything" blazer was reinvigorated! 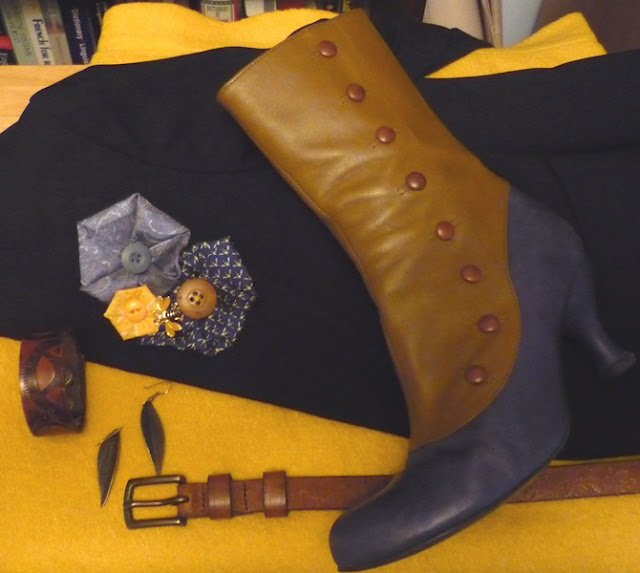 The focus of it all was the lovely combination of Megan Mae's buttonflowers*  - the tan button in the centre was the thing that led me down the path to the second neutral. Of course, if you're doing a buttonflower with bees on it, one must wear the bee brooch! I had so many compliments on my cluster of colour today - thank you, Megan!
*linking 'cause I love - do I even need to say that about Megan?

Hope your Monday was...well, not a typical Monday!