Since we are in the midst of a record cold snap, I've been bundling up in layers and layers. I'm wearing one of my long-sleeved workout tops under my sweater and two layers of tights with my boots!

Oh, and a mini-skirt too. Since I spit in the face of cold weather - pah! Take that, weather!

This is probably my warmest wool sweater. I layered brown fishnets over burgundy tights - the plummy colours don't really match, but I like the mix of tones. 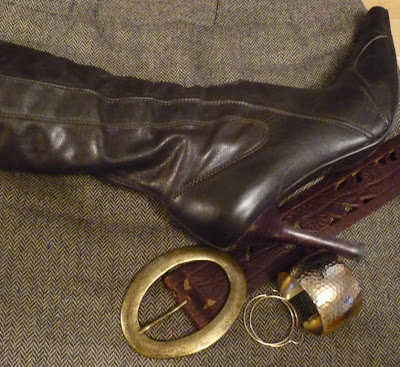 And for Sal from Already Pretty (love her!), who asked me, "How on EARTH did you survive 11 years in a Christmas store? I would've gone postal from the music alone!" here's one of my Toastmasters speeches that actually addresses that very topic.

I used to cringe when asked what kind of work I did. I would mumble “retail” and change the subject. I didn’t want people to know what I really did because they might think it was dumb, or that I was weird because of my job.

It was 1986, and I was a university dropout, just needing a job – any job – to pay the rent and buy the groceries. I had spent the day wandering downtown, leaving resumes in various stores with no luck. Then I walked into…Christmas. A year-round Christmas store. I chatted with the woman who would be my boss for the next eleven years, and she offered me the job on the spot.

At first I thought it would be temporary, but that summer stretched into five years, then another five years. And gradually, I stopped being ashamed and started to enjoy that my work was unusual.

When people asked me what I did, I’d say, “I’m one of Santa’s elves,” just to watch their reaction. Some of them thought I was odd. And a few thought I was wasting my time because I worked in a gift shop. But sometimes they were interested; why would I work in a year-round Christmas store for so long?

Working in a Christmas store is unlike any other job. Customers of every age; men, women, children; tourists from all over the world – when they came in the door, their cares would fall away and they would smile like a kid on Christmas morning. They would exclaim over the trees and ooh and ah over the villages. Some ornaments reminded them of their childhoods, and others became part of their own collections, creating brand new memories, and getting passed down to the next generation.

There were always a few humbugs, people who scowled and walked past. I always wanted to run after them and tell them to stop and take a few moments to appreciate the beauty inside.

I spent years surrounded by thousands of sparkling ornaments: velvets and beads, satin and lace, glass and glitter. Everywhere you looked was another tree covered in tiny lights, lushly decorated in themes to rival any Martha Stewart creation. Victorian angels, Father Christmases, jeweled strings of beads, glass icicles, teddy bears…every new arrival meant a new tree or display window to show it off.

And that was where I came in.

Only the Number 1 Elf got to create a new theme or window. A shipment of tiny tall ships and globes meant a nautical tree, strung with rope and fishing net. A crate of lit houses meant Santa’s Workshop would spring up in the window, complete with skating pond, sleigh and reindeer and Santa Claus himself. I always knew I’d done a good window when it was covered with fingerprints from kids pointing at everything.

But the trees were my favourite. I decorated over 300 trees while I was the Number 1 Elf, including the Christmas tree in the lobby of a local boutique hotel. First I put on the lights, hundreds and hundreds of them, so many it dazzled your eyes. Then the shiny balls, buried deep in the branches, glinting with jewel colours. Layers of beads and ornaments followed, until every branch was covered and the tree had been transformed into a thing of beauty and awe.

There are not too many jobs where you can say at the end of the day, “I created something beautiful today, something that people will remember and cherish. I helped make people happy, if only for a little while, in a place where they were surrounded with wondrous things.”

It’s been over 10 years since I was the Number 1 Elf, but I’d have to say: it was the best job I ever had. Now, when people ask me what I do, nothing quite has the same ring to it as, “I’m one of Santa’s elves.”