As this pandemic stretches on - hello, 11 months! - I am finding it hard to stay upbeat and positive. I am aware that I'm in a low-ish spot right now, and I know it will pass. Clothing As Armour is a good cure for what ails ya. 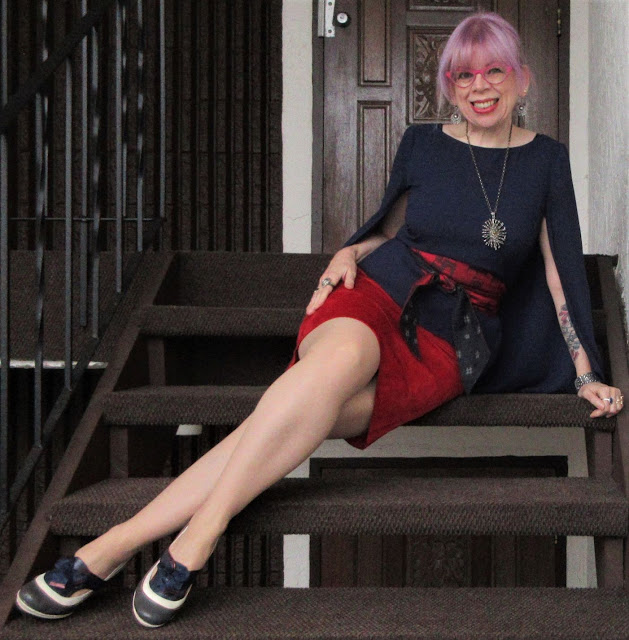 And there's nothing more amour-ish than a superhero cape.

I love this outfit in pictures, but it was less successful in action. It didn't help that nearly every element irritated the heck out of me.

The shoes didn't bother me, but I had a near miss of putting them in the giveaway pile.
I shivered in this top in my chilly office and sat in my coat for the last couple of hours.

Due to my increased amount of sitting at work the obi was pretty much crushed by the end of the day.
The top was too cold, even though I wore a tank underneath it. But it's so cool!

Although I love that it's part of a suit/has a matching jacket, the skirt is in more worn-out condition than the jacket and has a few marks on the front. I am officially adding a new red skirt to my second-hand wish list, but I'll keep this one (for now) due to Suit Love.
Masked up:

Even my mask annoyed me! I felt like I was fogging up more than usual.
Outerwear - uh-oh, we've had riding up issues with this jacket's sleeves in the past. Danger! Danger!

It was fine with the sleeves, as the cape just gets all bunched up anyway, but my skirt is an A-line (a classic late 90s/early 00s cut), and it rode up big-time.
Way up.

I felt leggy here with just nylons on, but picture this 7 inches higher! Zoiks! I had my hands on the hem the whole way to and from work. That never puts me in a good mood.
Outerwear stuff: 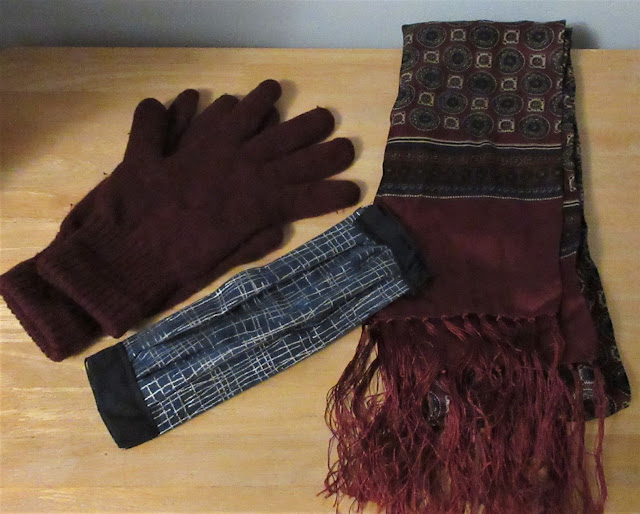 I stole L's silk fringed scarf from his stack of dressy scarves, at least remembering that my neck would be cold otherwise.
These burgundy wool gloves had gone AWOL recently, but I found them in an Unsafe Polar Bear pocket when I wore it a few days ago.
The stuff: 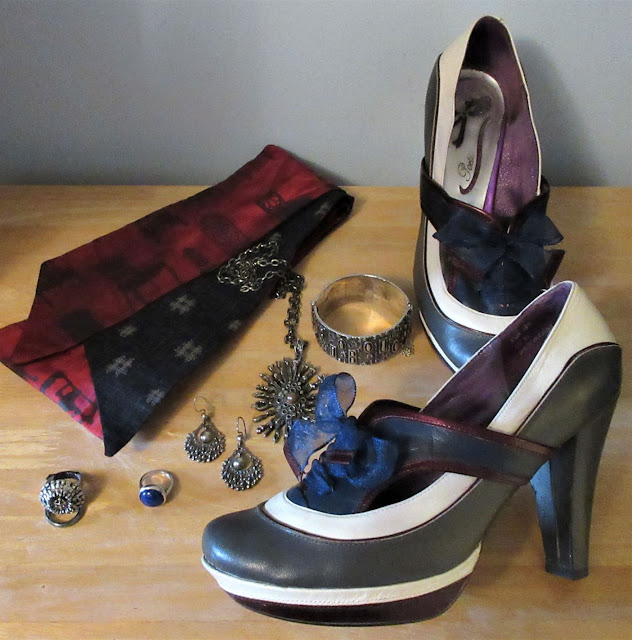 Ah, the shoes! These were the first really "out there" shoes I ever owned - I loved them the moment I saw them.
Brutal bling: 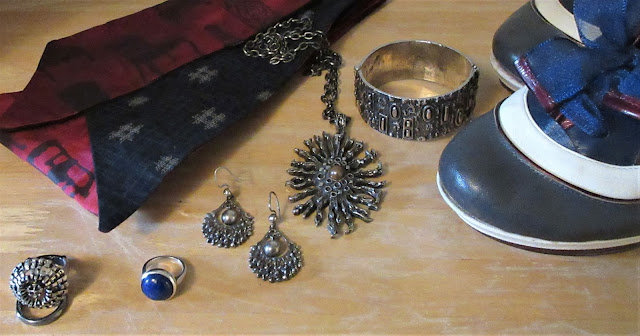 The print on the red silk of the obi is chairs.
The new earrings were excellent - I was happy with them.
To my despair and sadness, I noticed partway through my day that my beloved Best Shoes Ever were starting to come apart at the toes. 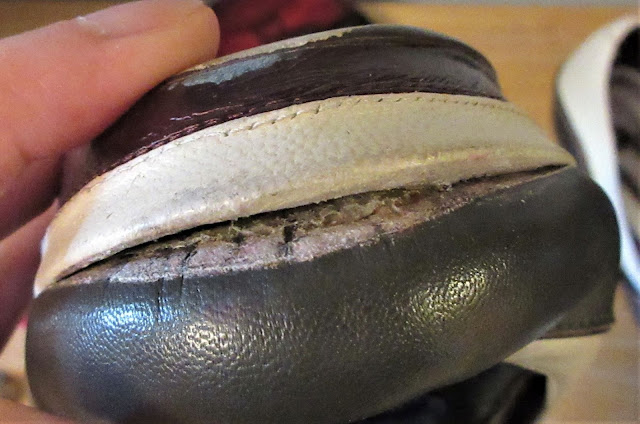 Both toes were separating from the sole. I mentally prepared myself to let go of these shoes. "The Flashback will be a farewell to them," I thought, feeling very sorry for myself after my irritating outfit day.
Finally recognizing that I'm in a low swing mentally right now, I put on my Big Girl Pants and pulled out the Zap-A-Gap and fixed them. 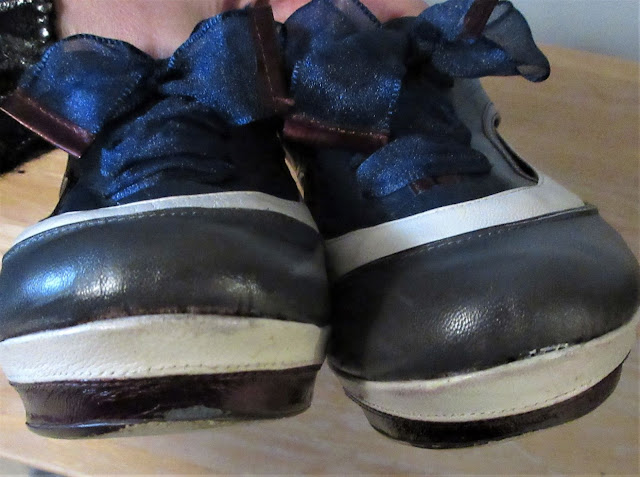 I felt instantly better (although I do have glue all over my fingers), and put the shoes back in the closet. And yes, these shoes are getting a little worn, but then, so am I!
Now, are you ready to have a look at some old outfits?

Poetic Licence Four-Colour Shoes aka "Best Shoes Ever"
I purchased these shoes here from the since-closed She She Shoes in Trounce Alley (their oldest location) in December 2008, making them 12+ years old now. I immediately dubbed them the Best Shoes Ever. I mean, look at them! 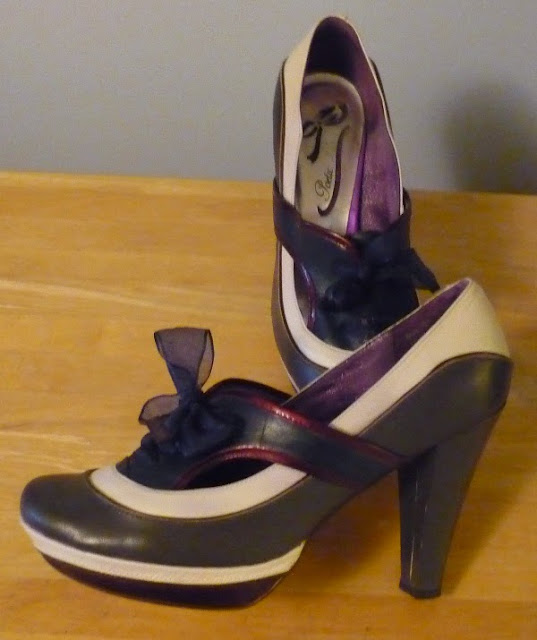 I had a gift certificate (likely for $100) from L and I don't recall them being on sale. Let's call it $199.00 spent in addition to the gift card - I know they were not cheap!
As multi-colour shoes go, these are actually pretty easy to match with other colours. Grey, navy blue, burgundy and white actually go with quite a lot. They are by Poetic Licence, a brand I love for their funky shoes. 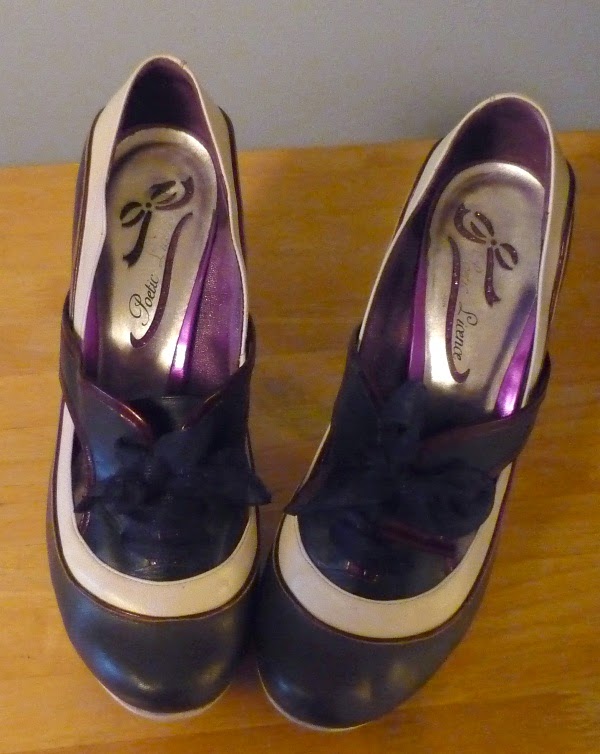 As with many of my older shoes, these got worn a lot more in the early days, when I didn't have anywhere near the numbers of shoes I have now. Compare my scant 20 pairs in 2008 to just under 100 pairs now!
I wore them right away to work (at my old job) in December 2008, and went full matchy.

I don't like a lot of these older outfits, but I do admire my older, younger self for trying! I was in a period of clothing experimentation, having just lost 50 lbs in 2006-7. I bought everything and tried some wacky stuff. Some of it worked!
I loved this silk Odd Molly skirt - I slightly regret giving it away years ago. 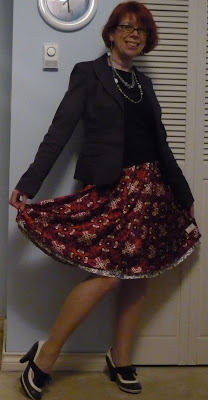 This was in January 2009. That's the first of many, many grey blazers I've owned.
In April 2009, before skinny pants were a thing.

And now the pendulum of wide-leg pants is swinging back. It only took 12 years.
I'm all office-y in my suit here in July 2009. 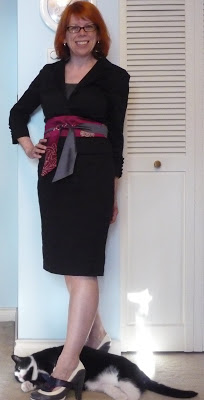 Aw, kitty Inigo, who just flopped himself down as the timer went off. I still have that obi - it's another Smoking Lily one.
I thought this was the kookiest outfit ever, when I wore it to work in August 2009.

I still have that floofy underskirt!
Most of my Smoking Lily obi collection (I have 3 or 4 of them still) was acquired around this time, and they have proven to be really useful with these shoes.

I had that cardigan for ages.
I also had this grey suede dress for several years - this is in August 2010. 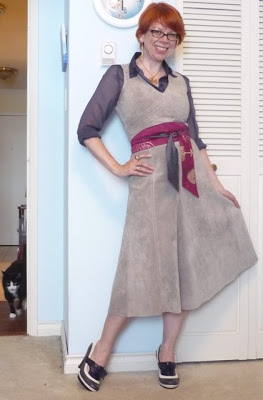 Inigo was a champion photo-bomber.
April 2011 - I'm in my current job here, and struggling with it. It took me half a year to get settled - it was a rough start. 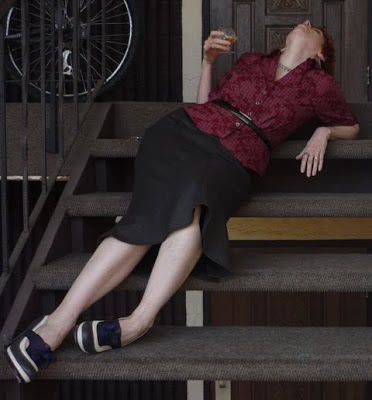 I'm loosening up with a scotch. Perhaps...too loose? I still have that belt.
Flashing my boobs in August 2011, proving that I'm wearing a dress under this navy cardigan.

I got good wear out of both pieces, but they're long gone.
As is everything in this October 2011 outfit.

That's Vizzini nonchalantly licking his toes.
The shoes were featured in three looks in my December 2012 thirty-item capsule in my 30 For 30 For 12 Wardrobe Challenge. 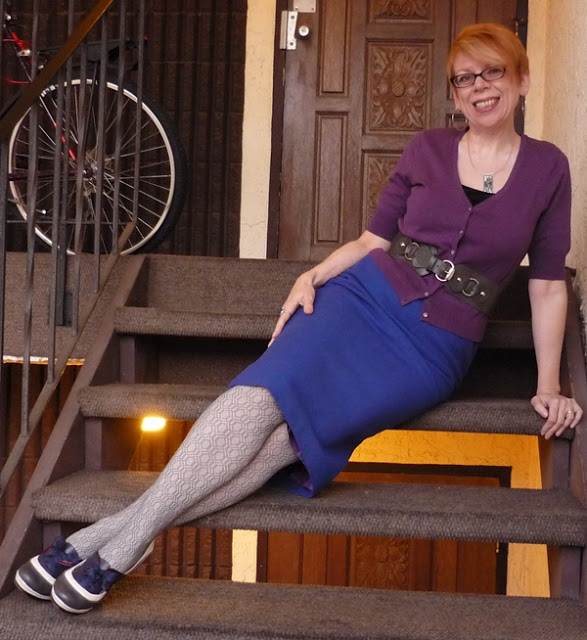 This was a daytime look. That's my Andres Courreges vintage skirt, which didn't get unpacked this fall (due to my COVID chocolate weight).
I changed the belt and earrings and wore it that night to my Weight Watchers Christmas dinner.

I still have that belt and necklace. Good accessories last!
I wore the shoes later in December 2012 with my old Smoking Lily chair-print skirt (the same chair print, only in silver, as today's obi).

That was a lovely piece - I passed it along many years ago.
You'll remember this jacket from its Flashback here.

I should pair it with these shoes again! This outfit is from October 2013.
All the stitching on this denim dress is tromp de l'oeil - not actually seams or pockets. Oh, and the dress was backless! I didn't wear it much - it was a little too odd, even for me.

This was in December 2013.
There's an obi! I had this grey lace dress for a few years. 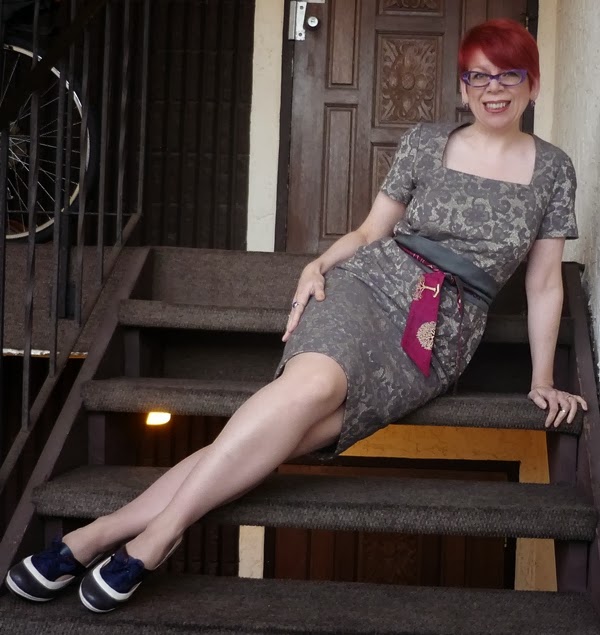 My hair is all coiffed in a swirl, with shaved sides - that was how I found out I had mostly grey hair. It was a bit traumatizing, and I immediately coloured over it!
Purple hair time - this is in October 2015. 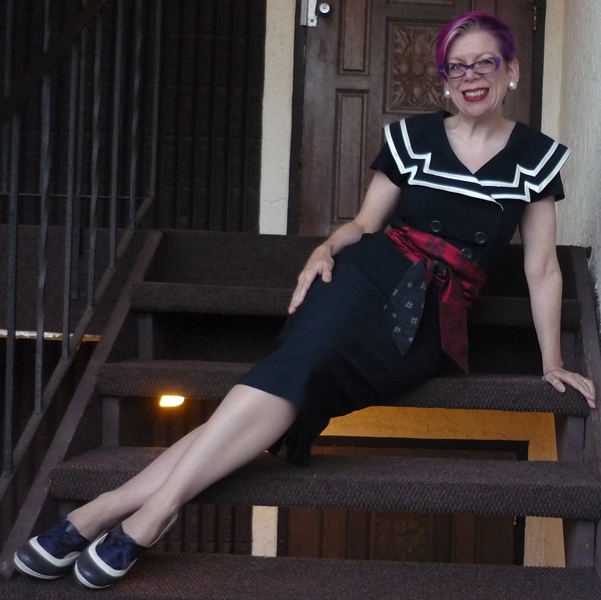 I bought that dress in Nashville, but ultimately it felt too costumey for regular wear, and I let it go. That's the same obi I'm wearing in the current outfit.
I like this outfit from January 2016. Blouse Flashback here. 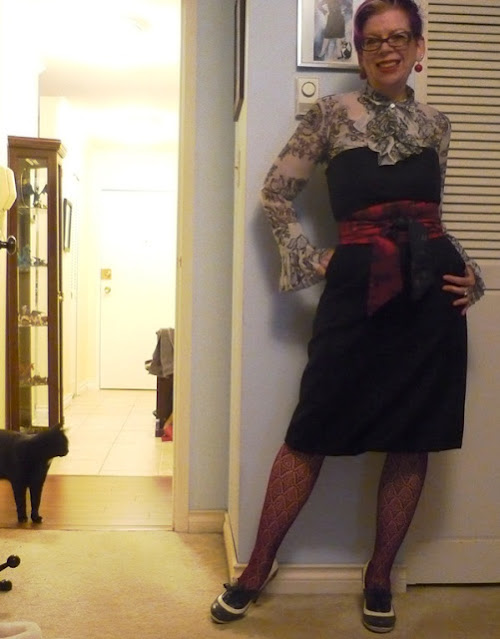 I didn't keep anything from this outfit - it totally needed a necklace, right?
One of my many grey skirts, this one featured in March 2017. 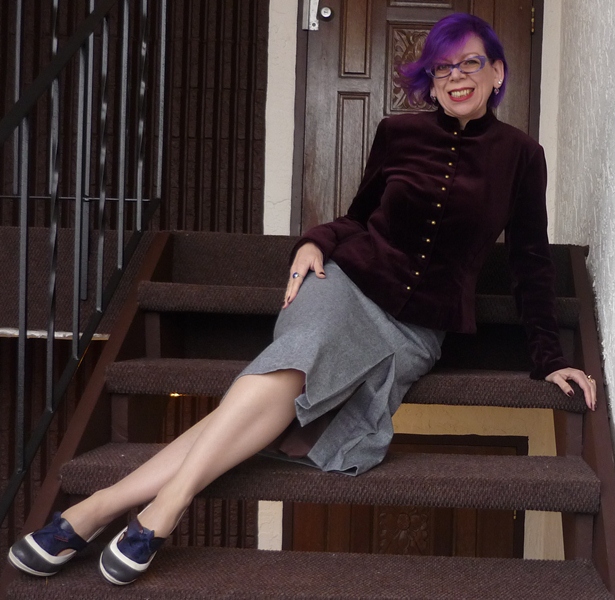 I really loved this blazer but it was not useful to wear, as it only looked good done up.
Monster Vest 1.0 transformed this work outfit into a Work Outfit, in December 2017.

This was a lot of fun to wear.
Same pants here in December 2018. That's the jacket that goes with today's skirt.

The navy and white stripes work well with the shoes.
And here's the last time I wore them, in February 2020.

I hated that blouse, and sadly, when I washed this skirt recently it was ruined and not salvageable. I'm on the lookout now for a new grey skirt - Flashback here.
Mathy stuff: Today's outfit makes 26 times I've worn these shoes! Wow, I'm really happy with that. At our estimated $199.00 original outlay, that works out to $7.96 per wear.
Okay, time to go get some Purr Therapy and chill. Take care everyone, and be kind to yourself.
Posted by Sheila at 6:46 PM

These are my favourite "Link Party" hosts and their blogs:
- Mica at Away From The Blue
- Shelbee at Shelbee on the Edge
- Nancy at Nancy's Fashion Style
Check 'em out! Link Parties are a great way to meet other bloggers, to share your own blog, and to become part of the blogging community. Be a good reciprocal Link Party participant and always link back - it's good karma!
As always, I link 'cause I love.