Happy Friday, my friends!
Is it fancy or is it just basic black? 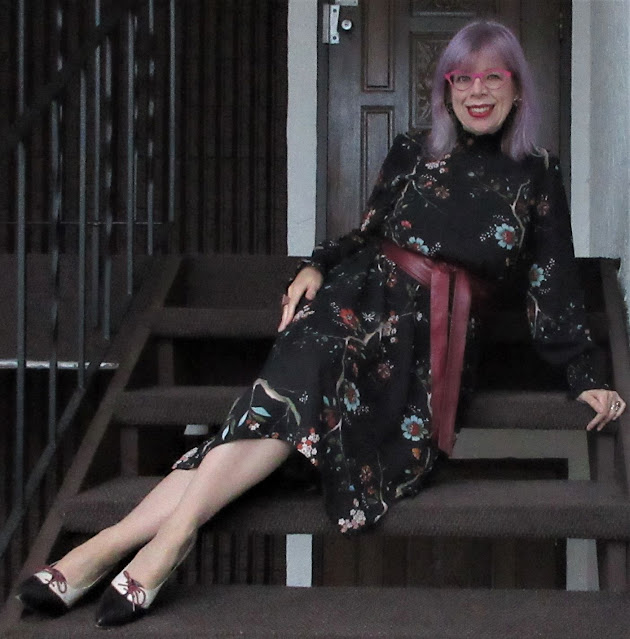 Either way, it's a jammy dress.
I refer to dresses like this - the high neck, long sleeves, long-ish hem - as Tattooed Lady dresses.

Of course this very respectable lady doesn't have tattoos! That would be shocking. Of course, I DO have tattoos.
The neckline, cuffs and waistband are all smocked with multiple rows of elastic - not even a zipper or a single button to put it on.

Isn't the high-low hem fun? I have a vintage nylon slip on under this for extra warmth.
Masked up. I went with this one that Cat made from one of L's old shirts. It's black with a floral pattern, and red dots. Perfect!

I'm noticing that masks are nice in cold weather for keeping my face warm and my teeth from aching. Bonus!
Outerwear - it is windy, rainy and cold. Brr! 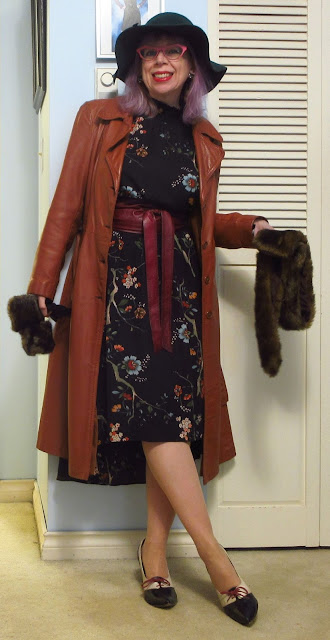 This felted wool hat is excellent in the rain, and it's a snug enough fit that it doesn't blow off in the rain.
All done up.

My vintage 70s trenchcoat is marvelous in the rain!
The stuff: 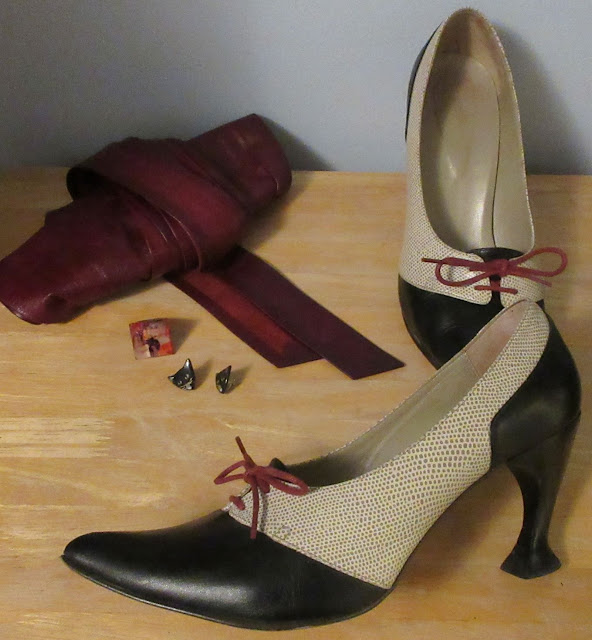 Aren't the shoes fun? I love the red laces, and the pebbled texture. These are one of my older pairs of Fluevogs, and we shall have a lovely Flashback on them shortly (you may want a cup of tea/coffee).
Simple bling: 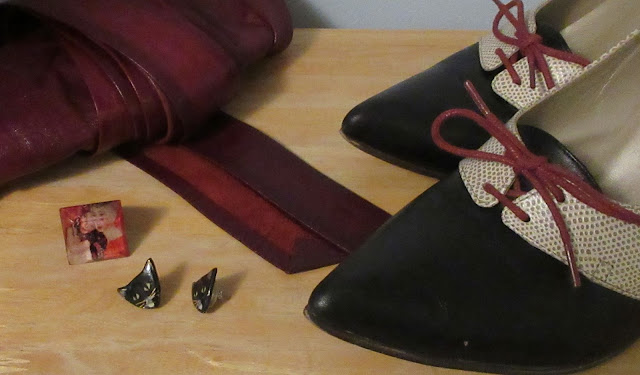 Didn't feel like wearing much - the dress did all the work.
Flashback: Coffee Sumatra Fluevogs
Back before Victoria had its own Fluevog store, a few local shoe stores carried limited lines of their shoes. I spotted them on the clearance rack at Heart & Sole Shoes, and gave "pleasepleaseplease" eyes to L, who then bought them for me, here in August 2010; I know they were $110 off, so were probably about $165.00 (as they retailed for $275.00 originally). 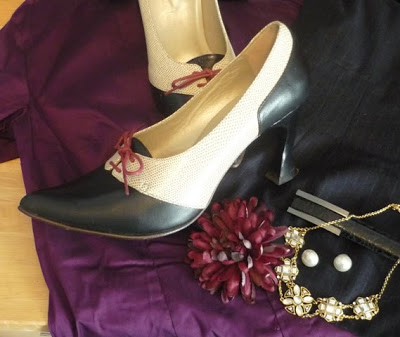 They are called the Sumatra, from the Coffee family of shoes (no longer being made), and are likely a style from 2008/2009. I also have the Coffee Kope Tiam booties (these ones, Flashback'd here), which have the same heel, as you can see from my helpful illustration: See the coffee pouring out? It looks like the spout of an old-timey coffeepot.
I wore them right away in August 2010, in a look that was very funky for my style then. That's a lovely wool strapless dress that I had for years and wore so many times over my collection of shirts and blouses. I still have the belt and the flower brooch. 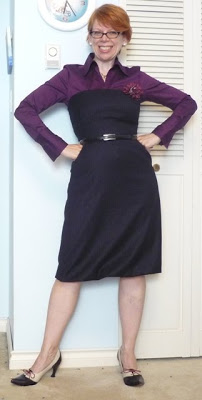 You might recognize from the picture behind my head in my current indoor shots - reader/former blogger Megan Mae copied my Wonder Woman stance for a picture she did for my birthday.

A bit blurry, but there it is - my shoes (and that first outfit in them) are forever preserved.
In September 2010 - still very much experimenting with my looks. Keep in mind that I'd lost a ton of weight (50 lbs) only 1.5 years prior, so I really started from scratch with my style all over again.

This feels "of its time" (eee, those pouffy sleeves), but I actually still have that floofy black underskirt. The shoes remain timeless.
I usually match black, white/cream and the reddish colour of the shoelaces to elements in my outfit. You'll see a lot of reds in these pictures!

This outfit is from November 2010 - that cream satin skirt was a favourite for many years, and I bought that grey shiny jacket in Camden Market.
This look is from January 2011.

At the time, I thought this was "out there"! I look like a waiter in my vest.
This red jacket was with me for a few years, until I got blood on it when I fell off a bus. This was in July 2011.

My skirt is my former "Periodic Table of Awesome" by Smoking Lily, which I gave to coworker Fiona (hi, honey!).
A backside shot in January 2012. We'll see this jacket again further down, and this is the same reddish suede skirt as the "waiter" outfit above.

Fluevogs are meant to be seen from all sides - look at that amazing heel!
My first month in my 30 For 30 For 12 Challenge was February 2012 - I wore these shoes 3 times that month.

There is some odd layering going on there - my year-long challenge really helped me hone my style. I forgot about that skirt - I left it behind (on purpose) in Florence, Italy, when we were there five years ago.
More weird layering, also in February 2012. I still have this leopard blouse, which is the nicest leopard blouse I've ever found. I'll be wearing it again soon! 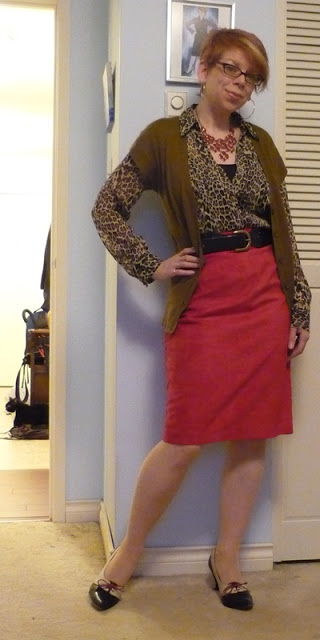 Aw, my old kitty Inigo is in the background there - we lost him a month later.
There's that plaid blazer from the backwards shot above.

I have had a lot of sweater dresses over the years - I remember wearing them in high school.
Oh, here's my blonde phase, from March 2013.

Same suede skirt again, and one of my many mustard blouses I've had over the years. I think this might be the first time I wore my Etro vintage blazer (which is still in my closet).
There's that satin skirt again - this was in August 2013.

I got a jump on the "cold shoulder" trend about 4 years early. That is my previous black obi, which I gave to Vero - I upgraded when I found a leather one (which I still have).
This was in February 2014, and that was a favourite blouse for many years.

That was also my Perfect Red Pencil Skirt until I spilled salad dressing down the front of it (leather + oil = bad). Aw, I'm sad all over again.
Realizing that the shoelaces do not have to drive the outfit, here I am in a pink ensemble in March 2014.

I look dubious about the whole affair - I was dabbling in "dark florals". Verdict? They are excellent - see today's outfit.
The second go at the Perfect Red Pencil Skirt, in February 2015. That was a really nice one. That's the same belt as in the first picture (I've had it a long time). Yvonne has this blouse now.
I get a kick out of this fun look from October 2015.
I loved that blouse so much, but I ruined it by washing it with something blue. I'm a careless launderer. I still have that plaid dress, and I'll be wearing it soon.
Another Vizzini-bomb in February 2016.
The burgundy skirt is from a suit that is now in Yvonne's closet, and the moths got to my "giraffe" print cashmere sweater.
That red skirt again - I think I tried to wash it and ruined it. Tsk tsk. Bad decision.

I like this classic plaid + red combination. Great shirt, althoughI passed it along a year or so ago, but I still have that bow-tie!
My wearings of these shoes have gotten less frequent in the last few years, as my shoe collection grew, but I try to wear them a couple of times per season when they are out (they're usually packed away for spring). 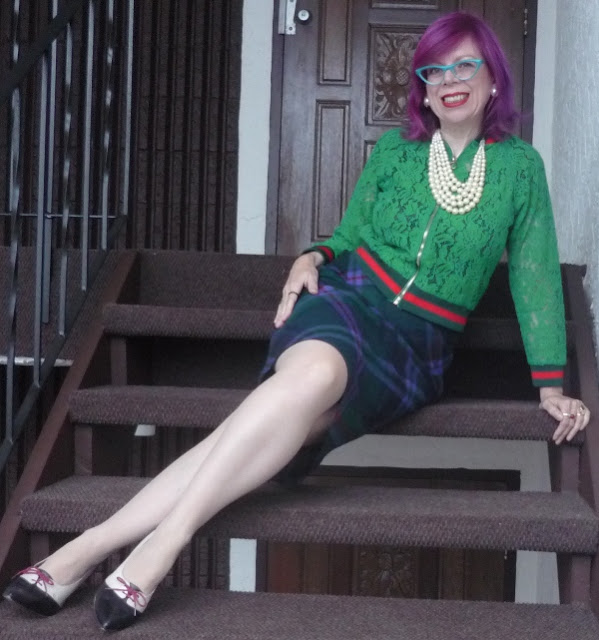 This October 2017 outfit is a bit of a hodge-podge of elements, and I'm not sure everything really works together. You might recognize my faux Gucci (Gookey!) lace bomber jacket, or my bigass pearl necklace - they are still favourites.
Pairing the shoes with my Etro jacket again in a badass look from February 2018.

My leather Gap trousers are vintage, nearing the 20-year-old mark. I didn't unpack them this season, as my thighs took one look at them and said, "Nope!" and I do not wish to make myself feel guilty. I love them, though, so they aren't going anywhere.
Two previously-seen elements get combined here in November 2018.

Those tights lasted forever! I had them for over 10 years before they finally fell apart.
Apparently, I missed wearing my shoes in 2019 altogether - not sure how that happened??

This is the last time I wore them, in February 2020, with my black leather pants (which we will be seeing at some point). I have yet to wear this lovely blouse and blazer, also.
Mathy stuff: Today's outfit marks the 23rd time I've worn these lovely shoes, bringing us to a cost-per-wear of $7.17. They are still in excellent condition, so I expect that number will go down even further over time.
And now I will leave you for the weekend with some...leaves. 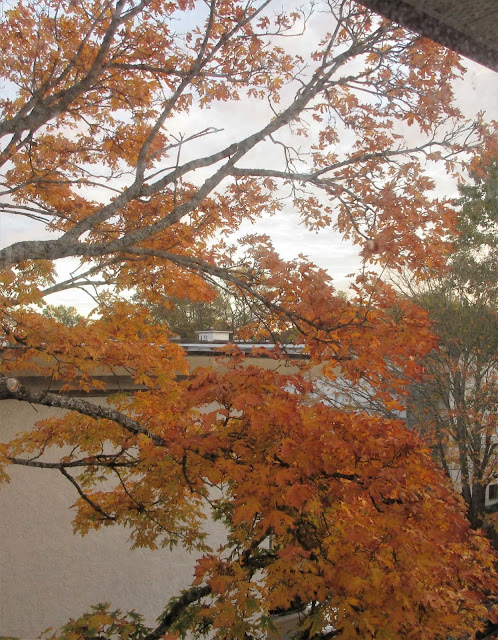 Looking across our neighbours' roofs - the maple tree is turning pretty colours.
A mix of pine, fir, oak and maple trees in the other direction. 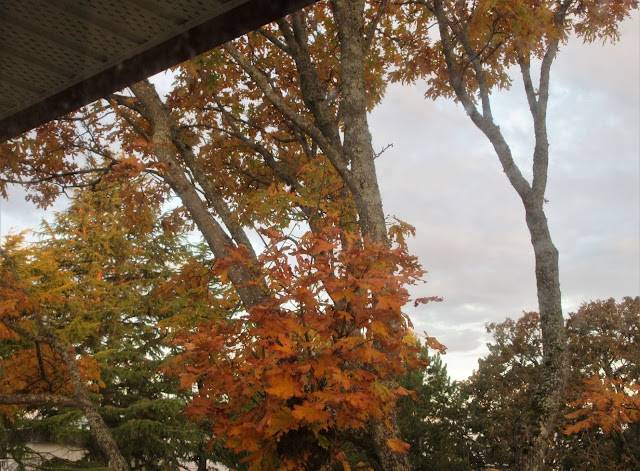 This is a good squirrel-watching view.
Guess who is not watching squirrels?

We've brought his post in off the deck for the season. Vizzini snuggled with the hot water bottle, and dreamt of sunshine.
Have a lovely weekend, everyone! Thank you so much for dropping by! I'll be back on Sunday with tales of adventure.
Posted by Sheila at 6:21 PM