I'm still woozy from this afternoon's trip to the periodontist (happy pill, much freezing, nap), so forgive my brevity. 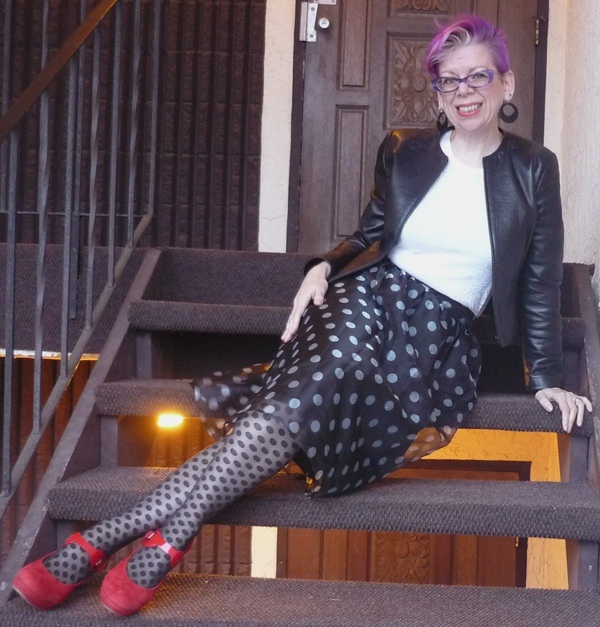 I originally considered wearing this outfit with the red Gaga-esque jacket, but its shoulders easily overpowered everything else in the outfit, so at the last minute, I went subtle with the black leather jacket. I mean, I do have giant silver polka dots, dotted legs, red shoes and bigass earrings. That's still subtle, right?

I liked but did not love this skirt, principally due to the lining which is made of "I stick to you!" acetate. I'm a-thinkin' I'm going to cut that lining right out of this skirt and wear it with a shorter slip so that the sheerness of the overlay is more prominent. What do you think of that? I'm certainly not going to hem the lining! This would assume madd needlework skillz, and also that I am not lazy as heck. 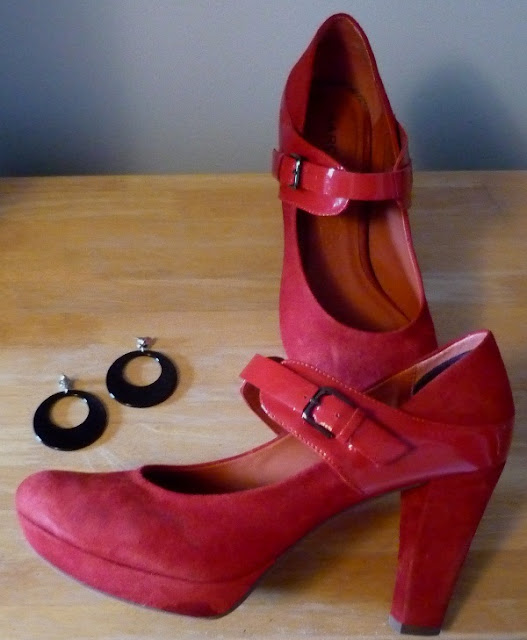 
I am a bit late for "Literary Stylings" over at Gracey's Fashion for Giants, but here we go, catching up!

The first two books of the five I finished since the last time I posted (here), are these. I also read another Lois McMaster Bujold, but had to return it to Stuart at work. 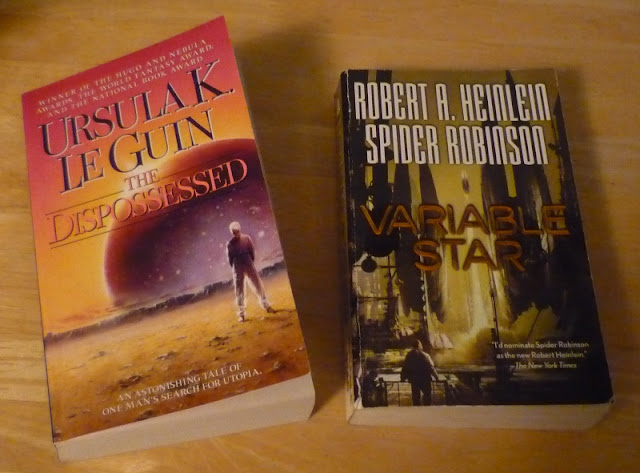 "The Dispossessed" by Ursula K. LeGuin - I was super-excited to read this. One of the all-time great science fiction writers? I'm in! Except, oh gosh, snore. This book was a slog. Very talky, not much plot and it wasn't until nearly the end of the book that I realized that it had been jumping around in time - Ursula, a little hint at the start of the chapters would have helped!

"Variable Star" is by Robert A. Heinlein and Spider Robinson. Heinlein is long-dead; Spider is alive and living in Vancouver. He was commissioned by the Heinlein Foundation to finish this last book, based on Robert's notes. I am pleased to say that he did a damned good job, ably excising the sexism that threads through many of Heinlein's novels. While the ending was a bit of a let-down, the entire story was a rollicking good ride. I also appreciated the "Trailer Park Boys" joke mid-way through it (a little in-joke for Spider's fellow Canucks). This was a bathroom book, so it took me longer to read. 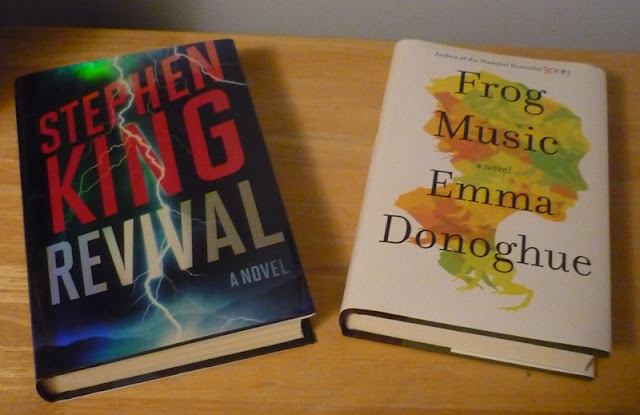 I finished "Frog Music" first, not knowing who Emma Donoghue was, but by the time I was done, I was very familiar with her, as the writer of "Room" which was a movie up for several awards. This was a Book Club pick (thank you, Kathryn!), and we all enjoyed the strong female lead characters. It's set in the San Francisco gold-rush era, with a rich background of the folk music of the time. Not a book I would have chosen for myself.

"Revival" is me working through my unread Kings by my nightstand, and it was also a bathroom book. King is an easy read; easy to pick up and put down here and there without losing what's going on. I enjoyed this book, although - as always - his endings are weak and run out of steam (but not electricity, ha ha, book in-joke).

Oh, and mailbag question from Ms. Mica T of Away From the Blue (long-time blog friend, hello, Mica!):


What do you do with all the designer pieces you score when you get bored of them? Do you resell them or do you do like you do with your other clothes and pass them on not worrying about the price?

Your suspicions are correct, Mica: I give them away just like I do with everything else I own. I point out name brands that my friends might not be familiar with, but it's almost the same for me as with cheaper brands. I do like to make sure that a piece goes to a good home where it will be really loved (looking at you with Kim's suit, Yvonne! Mwah!), versus just tossing it in a bag for picking over.
Posted by Sheila at 8:38 PM