I haven't been on a vacation of longer than 5 days in three years, so I dithered quite a bit on What to Pack. I wanted to take a functional capsule wardrobe, but I also had another plan in mind: come back with less than I took.

The idea was to take clothing, shoes and accessories that I didn't want anymore, and leave them behind in the various hotels. This way, I'd have clothes to wear, but lots of room to pack the new things that I would (obviously) buy.

I saved up my old underwear (ha, maybe TMI! sorry!), socks, tights with snags (I tossed all that stuff, don't worry!), and went through my bags of stuff in my "giveaway/consignment" area at home for planned abandonment. As I used or wore things, I put them in a pile, then at the end of our stay, I put a note on them: "Garbage or Keep For Yourself."

I couldn't keep track of which day was which, but here's what I wore while on vacation in London:

This was what I looked like 90% of the time, due to cold, rainy weather in both London and Paris. So much for my plans of looking chic while I shopped! Abandoned: Boots.

I wore this dress to death! Abandoned: boots, dress, belt.

Thank goodness for the cardigan - it was snuggly warm. This was my travel outfit on the plane - I tossed the shoes as soon as I arrived home.

I wore this on the first day in Paris. Kept both tops and the studded cuff. I know I wore jeans at least one day, but they were so hideous I tossed them really fast (bad muffin top!).

By the time we got to Paris, I had very few clothing pieces left, so they got worn multiple times. I never really got sweaty, and I aired things out and didn't wear things multiple days in a row to keep them fresh. I handwashed underwear. 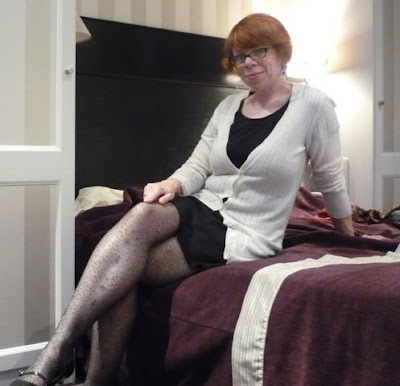 Pointing at my boo-boo from wiping out at Notre Dame. Tossed: tights. 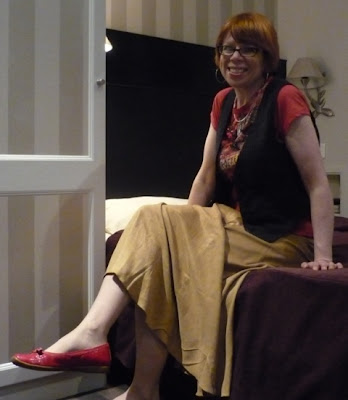 I only took two pairs of earrings: a pair of hoops and a small purple stone pair. I took a silver chain and a bunch of charms to make a variety of necklace looks. 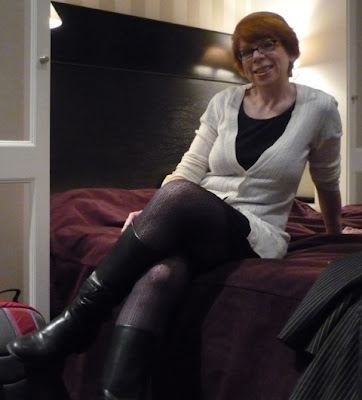 That's it! I ended up abandoning 1 pair of shoes, 2 pairs of boots, two dresses (I had taken a purple taffeta strapless dress, but it was too tight and I never wore it. I didn't feel like lugging it around, so I abandoned it), a pair of jeans, a skirt, two camis, two t-shirts (I slept in one), a belt and a cardigan. Oh, and a bag that I didn't want anymore.

I bought home 3 dresses, 4 pairs of shoes, 3 t-shirts, a vest, a new bag, a purse, and a bunch of jewelry. I actually had more room in my suitcase than when I left!

Email ThisBlogThis!Share to TwitterShare to FacebookShare to Pinterest
Labels: London and Paris, On My Travels