Me and Dave - She and Cowboy

As you may or may not know, I have one sibling, my younger brother, Dave. He turned 40 this past January, and I wanted to do something nice for him, sort of to commemorate our... siblingship?

We didn't really get along all that great as kids (he has scars on his forearms from me digging my nails in), but once we hit our teens, we sided against Mom and Dad (as teens do) and became friends. We even lived together for about 8 months before I met L. Dave is one of the only people who is allowed to call me "She".

Anyway, as I was digging through my photo albums, I found all these great old pictures of us and him. Some of them made me laugh and some made me go, "Aw..." 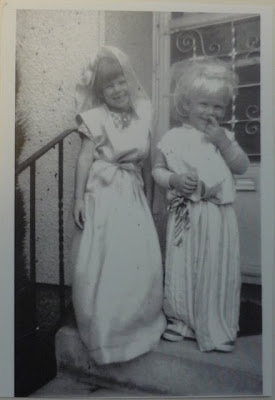 This is Dave and I playing dress-up. My gown is one of Mom's old bridesmaids dresses (the aqua one, I think), complete with veil. Dave is in one of Grandma's dresses, I think, and is wearing a lime green fascinator veil thingy. He's also picking his nose, hee hee.

We're standing on the infamous front steps. I'm about 5 or 6, and he's about 3 or 4. I knocked my front teeth out at some point, and they haven't grown back in yet. 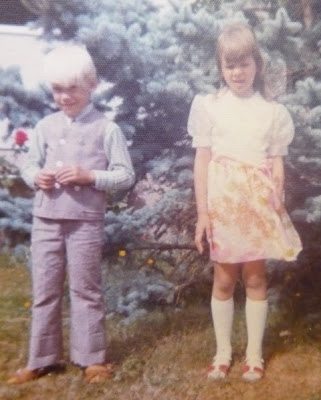 Grade 2 for me (making it 1973), so kindergarten for Dave. That blue spruce we're standing in front of was very prickly. I like Dave's white-blond hair and his matching pants and vest. Snazzy!
In the front yard, first day of school again. 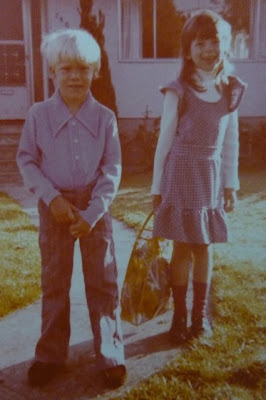 Grade 3 for me (1974), and grade 1 for Dave. I was very fond of that jumper - it was dark red, navy and white and very strong double-knit polyester. Dave's in plaid pants and Wallabee shoes (oh my god, I just did a search, they still make them!).
Another first day of school (Mom was very big on tradition): 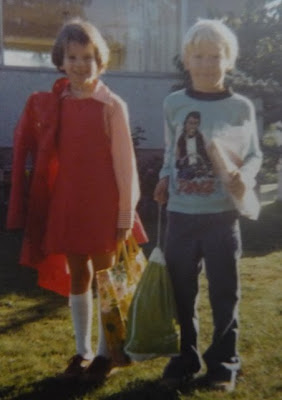 Grade 4 for me (1975) and grade 2 for Dave. As you can see by his Fonzie shirt, we watched "Happy Days". I'm in my new red jumper with matching red and white striped button down (I look like a candy-striper!) and my red raincoat. We have our books and gymbags all ready!
All of the kids in the neighbourhood liked to play dress-up with us: 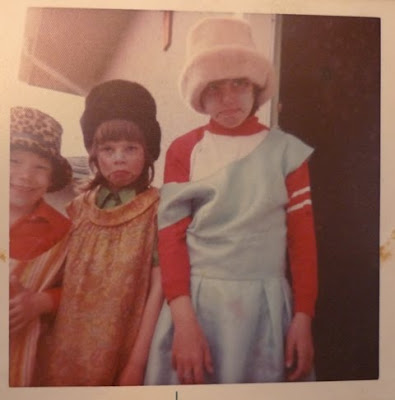 Dave on the left in the lovely leopard hat (gift from Aunt Lois), and I think that's the same dress as in the first picture. I'm wearing one of Grandma J's old house-dresses, and some crazyass fuzzy hat. Steven (or Dee as his brother Brian called him) is wearing the beloved aqua bridesmaid dress and another fuzzy hat. We appear to have some make-up on, so we are probably supposed to be clowns.
I think we did these photo-booth pictures when we were in Saskatchewan visiting Great-Grandma and Uncle Leonard:

As you can see, I am the serious one and Dave is the goofball.

He can always make me laugh. I remember he heard a line on TV or something, and everytime Mom would ask him to do something, he'd say, "Not this cowboy!" I started calling him Cowboy after that... sometimes I still do.

That bottom picture reminds me of "The Brady Bunch".
This is from Christmas (duh), probably around 1975: 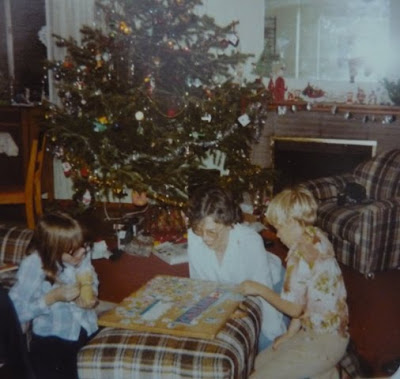 Dave, Mom and I are doing a puzzle (one of the many Canada map puzzles we had). As Dave's wearing a Hawaiian shirt, this is probably the year after our first trip to Hawaii.
Heh, I inherited that gawdawful plaid furniture when I first left home. Othello turned that plaid chair on the right into a work of art, totally shredded it.

Dave got a little motorbike: 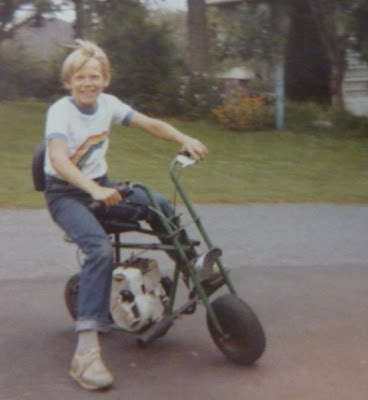 Ah, puberty. The sweet little boy starts to fade away. 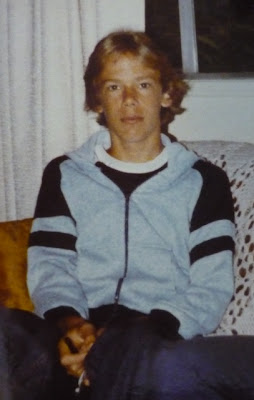 I remember going away on a student exchange for two weeks and coming home to find out my "little" brother was taller than me. I'm the shrimp of the family at 5'4" - Dave is 6'3". 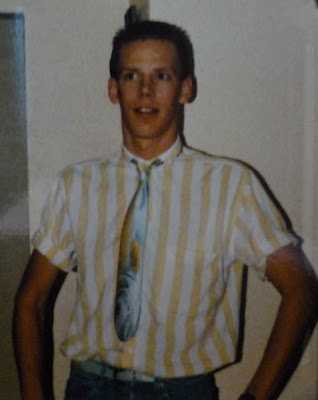 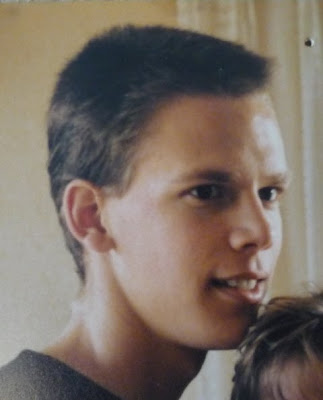 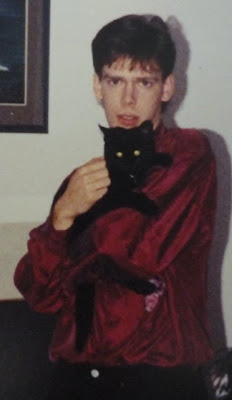 Aw, that's his kitten, Syd. Or is is Floyd? I can't remember - neither of them lived very long, sadly.

Growing out his hair...verging into mullet territory: 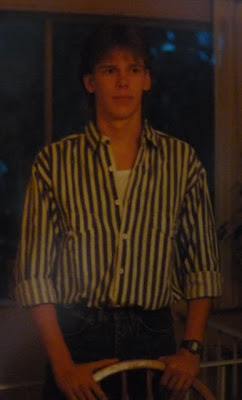 Nice striped shirt.
Ha, this next picture has become something of a legend in our family. We joke about it all the time. Mom wanted a portrait of us two kids, so Dave picked me up after work and we went to some studio and did the portrait. When we got the picture back, they had messed up the colours. I had brown hair, and Dave's hair was black. We had to demand retakes.
Was it worth it? 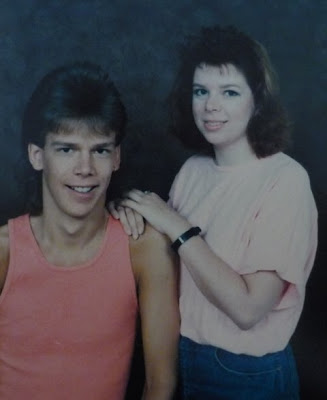 Well, let's just say, this picture is definitely "of its time", which is about 1991 or 1992. Dave's got the full-on mullet - nice peach wife-beater (no offense meant, that's what we called them) he's got on!
Of course, I'm no slouch either! I've got my teased bangs, oversized tee (with the sleeves rolled up), and my mom jeans on, and am rounding out my look with a black plastic watch. Zoiks!

This is also in the 90s, at the apartment where I lived with my ex: 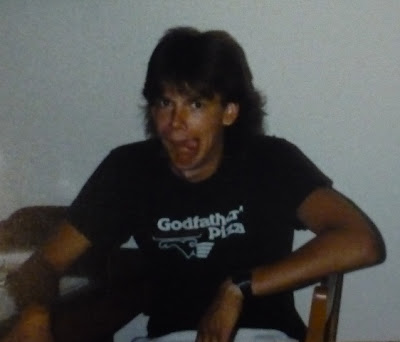 Dave's still mugging for the camera.
I don't have too many recent pictures of us, but this one means a lot to me: 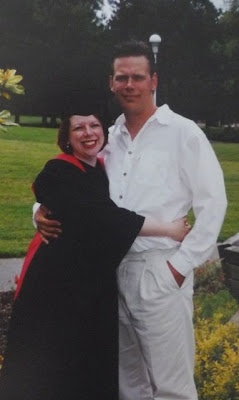 My graduation from university in 2000. Dave said to me just before Mom took the picture, "Dad would be so proud of you." (Dad had died just 3 years earlier) You can see I'm trying not to cry.

These last pictures are the most recent ones I have of us: 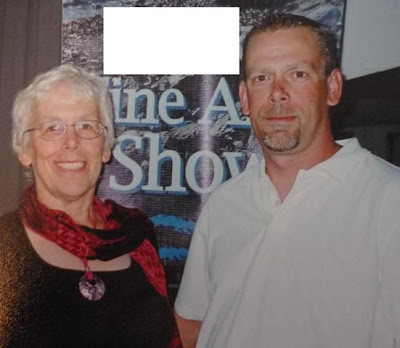 Mom and Dave at the art show (Mom had a painting that was accepted to show in it) about 3 years ago. Dave's gone grizzled. He looks like a cross between Dad and Grandad (Mom's dad).

I keep this picture on my fridge: 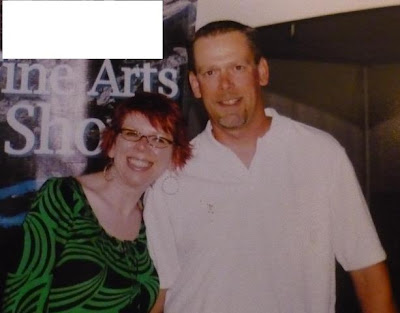 Anyway, I love my brother a whole bunch, and I don't see him as much as I'd like to. Part of that is that our family is just kind of distant that way, and part is that, well, we both have our own lives. But when I talk to him or see him, hey, he's my brother. He's still and will always be Cowboy.
Love ya, Dave.
Posted by Sheila at 6:36 PM

Email ThisBlogThis!Share to TwitterShare to FacebookShare to Pinterest
Labels: Stuff about me