Brunch With Betty, Another Plaid Flashback

Time to connect with my former coworker and friend Betty for brunch! We last got together here in June (love that outfit). I love an excuse to dress up, and I adore Betty. 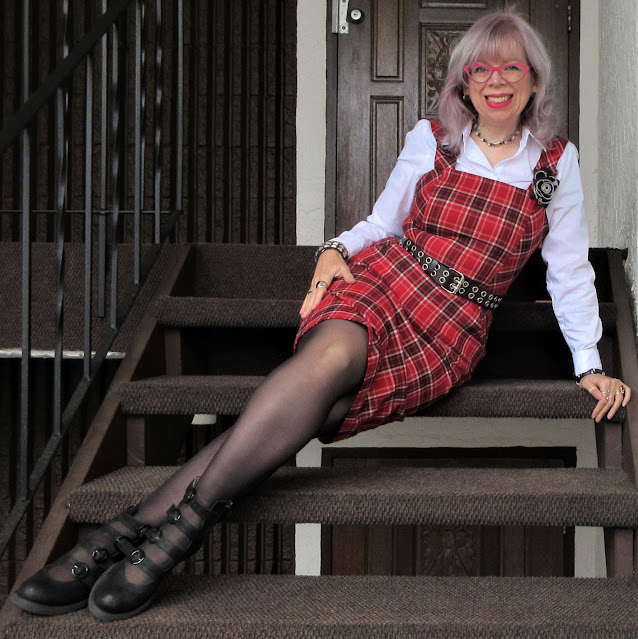 Nothing too crazy, though - we went to the Snug at the Oak Bay Beach Hotel (a very posh place). Just enough to be me, but to also give the "Tweed Set" a thrill.
I was inspired by yesterday's plaid dress...to wear my other plaid dress! I rescued this from the giveaway pile back in the spring.
Which is why I haven't worn it in TWO YEARS...it's been in the giveaway for almost a year, and then I was waiting for fall/winter.
I layered my new white shirt under it. Shockingly, I've never done this before!

Yup, that's a white shirt. I tucked it into the (control) top of my tights to keep it anchored in place and not ride up.
Isn't the dress cool? I love the way the plaids have been rotated for contrast.

The fabric (unlined) is a poly/rayon blend, and it's gotten rather pilly over the years.
Masked up - this is my grey cats one from Mom.

I'm ready to go beyond the Tweed Curtain! Betty and I had a lovely time, catching up and chatting for over two hours! It just flew by. It's fitting that my first time wearing this dress was in my early days at Weight Watchers, where we worked together for nine years.
Outerwear - I love this striped coat.

It's warm enough to wear a lighter-weight wool coat for now. This was an excellent find from now-closed My Sister's Closet from a few years ago.
Done up - no scarf, as Betty picked me up. I waited outside in the rain under the dripping cedar tree.

But I need gloves for my poor arthritic hands. Living in a damp region is murder on your joints.
The stuff: 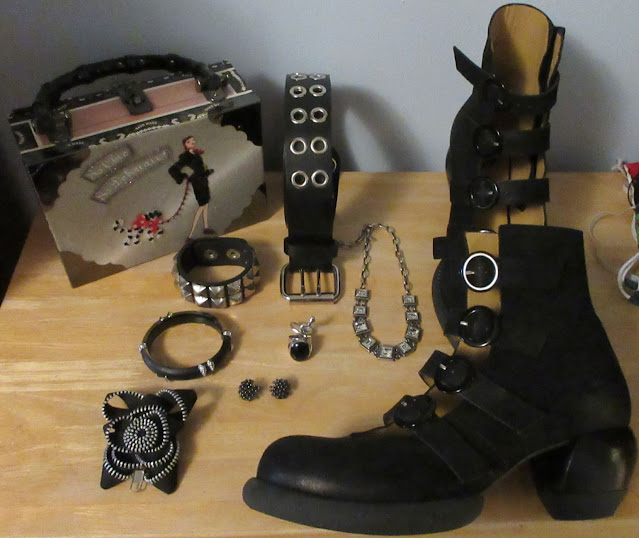 Easy shoes - these are proving to be a very good purchase. They were excellent for navigating puddles, big piles of wet leaves, and slippery tiles - hooray for rubber soles.
Punk bling: 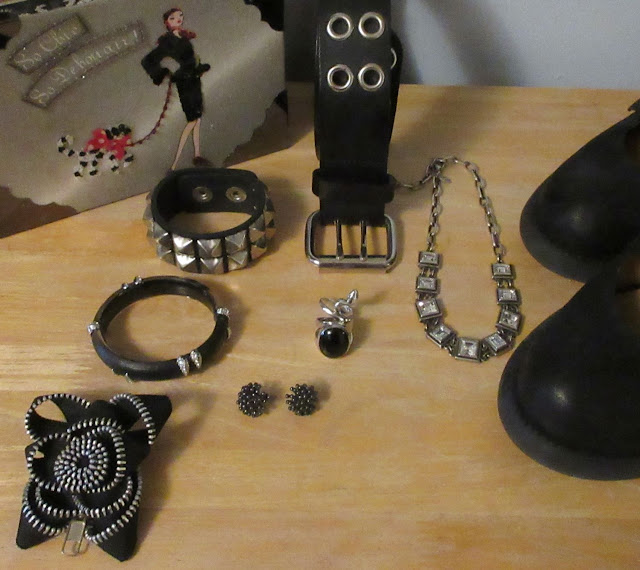 Some of the older things in my accessory wardrobe.
I have not used this purse in well over a decade! I showed it off here in 2010, and noted then that L had bought it for me around 2003-2004. I believe this was from the Cobbler shoe store and retailed around $45.00. 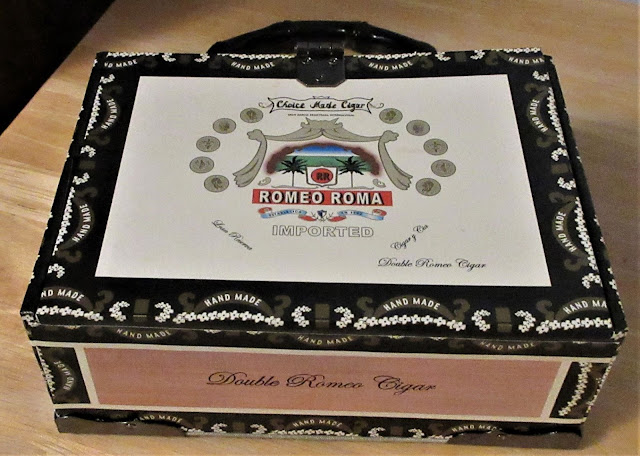 It's actually made from a cigar box (wood with paper over it).
I see lots of these online labeled as "vintage" or custom-made, but sorry to break it to you - it was made in China. 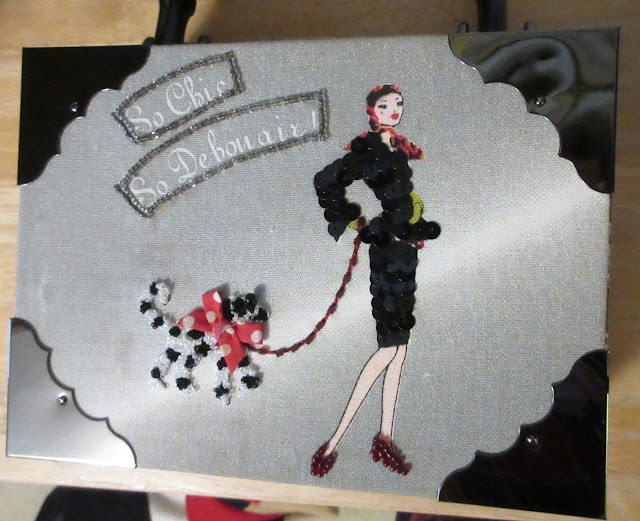 The handle is moulded plastic - not real bamboo. I love the beaded, embroidered and sequined accents. "So Chic, So Debonair!"
I find it annoying that you have to put the fancy top image face down to open the purse. This explains the minor stains on it: I probably put it on a wet bathroom counter or bar at some point. 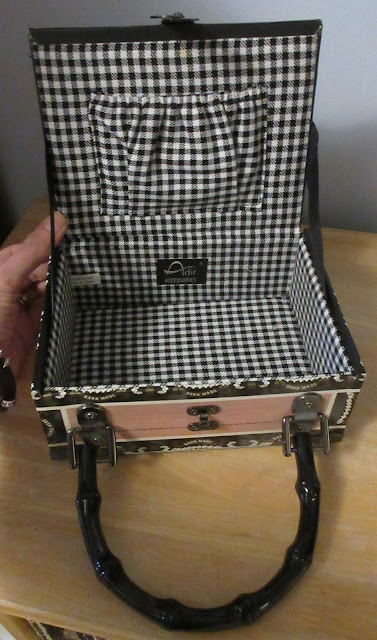 It also doesn't stay open on its own. Whoever designed this did not take practical use into consideration!
It's by Adir Accessories, which gets exactly zero search results. 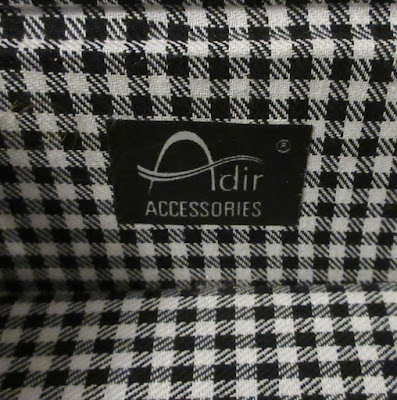 The inside is padded and all gingham. Cute enough for a brunch!
Flashback: Plaid Dress by Plum
Plum was a Canadian boutique chain that started in 1985 - sadly, they closed for good in 2019. There used to be a Plum store in downtown Victoria - I would gorge on purchases there when they had a sale, as they were one of the few places that carried really nice clothes in larger sizes. Most of their clothing lines were also made in Canada, and they specialized in dressier clothes and suiting separates for the professional woman.

When I lost weight, they were one of my go-to stores for restocking my wardrobe, and I still have a few of the pieces I bought there. They closed their Victoria store in 2011, not long after I snapped this up in a sample sale in February 2011 for $25.00 (here). It's Plum's own in-house brand.
I first wore it here in February 2011 for working at a Weight Watchers' open house.

There's today's zipper rose! Fitting that they are reunited.
I layered a wrap cardigan over it in April 2011. Only the dress remains of everything I'm wearing here. 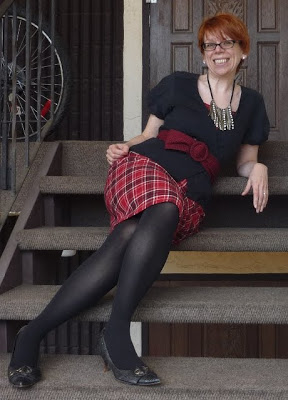 This picture makes me laugh; the stairs were a new photo area for me then, and I have not quite attained my classic Stair Pose yet!
I wore the dress three times in my 30 For 30 For 12 Challenge in October 2012.

Wearing today's studded cuff, and I still have that stomacher (the black mid-section part) and my skull scarf. Note the striped tights - they will reappear 6 years later!
Another October 2012 outfit - this is a navy blue velvet blazer that I've belted over it. I still have that Smoking Lily obi.

I also still have the Christian Dior slip that's peeking out at the hem.
I gave up my jean jacket a few years ago (I have more creative options), but this is a classic look, also in October 2012.

The leather obi and my cuffs are still hanging around. Those shoes are...words fail. Not good.
I was inspired by a trendy look in my September Vogue in October 2012 and tried some stuff. 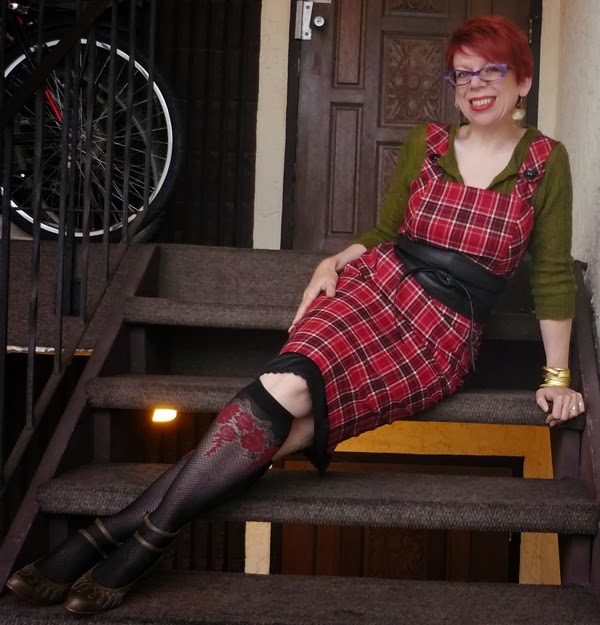 Whoa. It's...different, but not awful. The knee-highs are...a choice. I still have everything except the sweater (we saw the shoes in Flashback here).
A rear-view shot in December 2013.

It's just a black sweater and a black belt. I wore those boots to death, then gave them to coworker Holly.
Another experimental layering look from March 2014.

My Dior slip is showing again (I have issues with the unlined skirt section riding up). I loved those Marc boots - I wore them out too. Today's shoes are the spiritual replacement for them.
I felt very badass in this leather jacket look from September 2014. 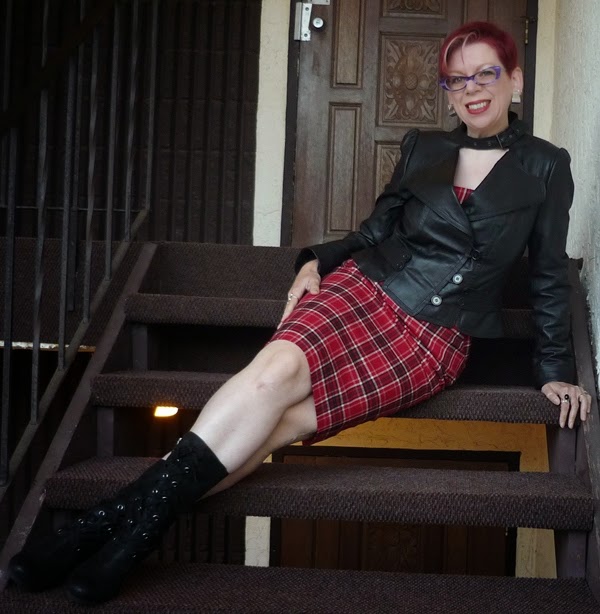 That remains the sole time I wore it, however. It was too choke-y at the neckline and didn't look right undone. Too limiting for styling!
Another plain outfit, likely for brunch, shopping or both, in December 2014. 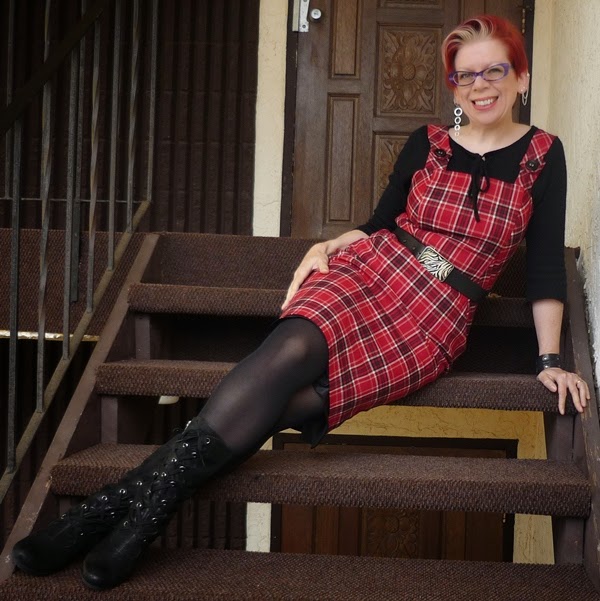 Not terribly creative, but it's a solid formula.
I love this look from October 2015 - I wore this to work for my birthday.

I miss that blouse! The ruffles! I ruined it by washing it with something dark. We saw those shoes in Flashback (here).
This was a brunch outfit in October 2016. No glasses! I was getting used to wearing contacts again briefly; I only wear them for special occasions or for playing Ulti.

The grey cashmere sweater was a moth-eaten around-the-house stalwart for years (I'm hiding the holes under the dress here). I still have that belt/buckle and of course, we saw those OTK boots in Flashback here.
I've had a lot of basic black sweaters over the years - this one I still have. You'll recognize the belt from the current outfit, and those boots are due a Flashback one of these days. 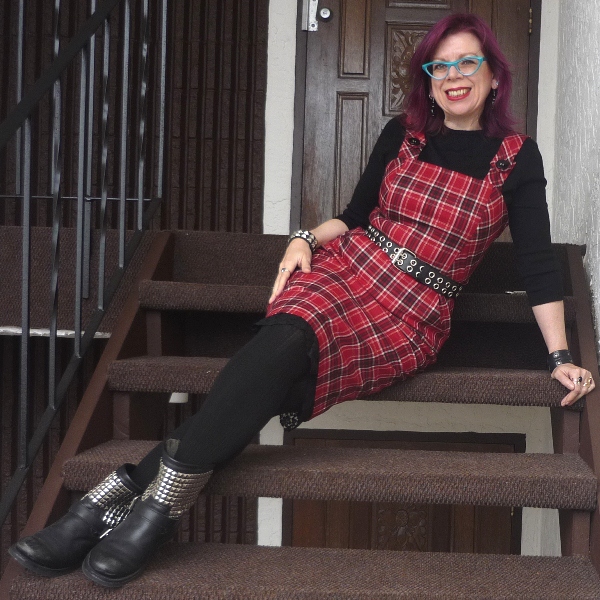 This is what I wore to get my last tattoo, with my brother Dave, in November 2017.
And this is the last time I wore this dress, in November 2018, in a "rebound" look from a botched outfit the day before, here (it doesn't look that bad, but I remember the frustration). 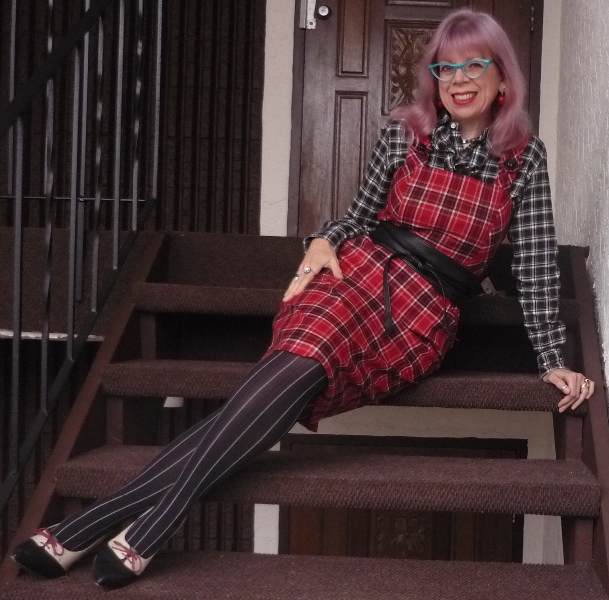 I might like this over look the most of all of them? I love the pattern mix! There are those striped tights again - they lasted me nearly 10 years.
Mathy stuff: Today's outfit brings us to 15 times worn, equating to $1.67 per wear, which is quite decent for such a funky dress. I'm glad I rescued it from the giveaway (to those of you who encouraged/applauded this, yes, yes, you were right), and I think I have quite a bit of wear in it still.
How would you wear this dress? Any ideas? Should I repeat any of these looks?
Posted by Sheila at 3:29 PM