Hola! Today's outfit is brought to you by "Literary Stylings" over at Gracey's blog Fashion for Giants. 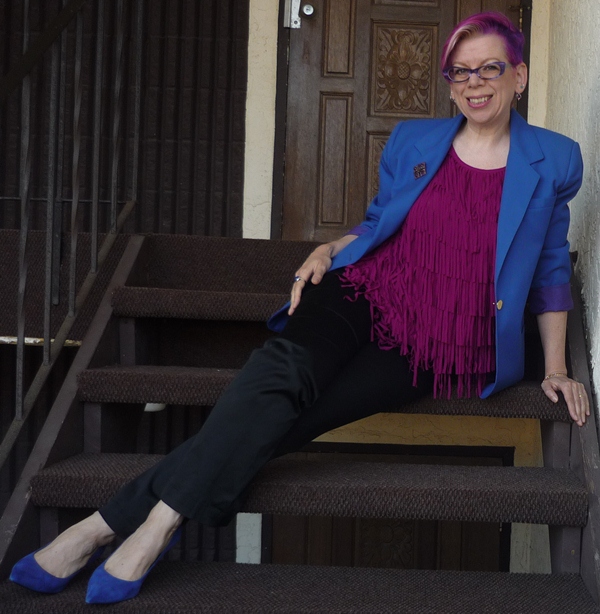 I'm not a giant, but I like how much she reads - I'm a giant fan of books! Today's outfit is sort of a stretch on the theme, heh.

Vizzini was a major photo-bomber this morning. I realized when I looked up my last "Literary Stylings" post that I never answered this question from Larissa - sorry!

I am curious, just how do you pronounce his name? Is there any significance to his name (other than being his name)?

Vizzini is pronounced "Vizz-EE-nee" with the same stress as "bikini". He is named after the character in "The Princess Bride" (both the book and the movie), which is probably my and L's favourite movie. We can both quote the movie extensively. The character in the movie is a conniving self-professed genius, who is the mastermind of the kidnapping of Princess Buttercup, and his classic line is, "Inconceivable!" Our last kitty was named Inigo Montoya ("you killed my father, prepare to die!"), so we kind of had a theme going when we got Vizzini. Unlike Inigo (who was more like the character Fezzig), Vizzini suits his name very well.
I really liked this fringe-y blouse! I wasn't sure I would - the fringes are very much cat-bait and they kind of cling to other fabrics - but I liked the movement. I had a lot of very positive reactions to this whole outfit (mostly because of the bright blue and the fact that my hair matches the blouse).
I also re-enjoyed this bigass boxy 80s jacket, although I'd forgotten that I'd safety-pinned the button on last time I wore it, so that showed. Hey, I'm classy that way. 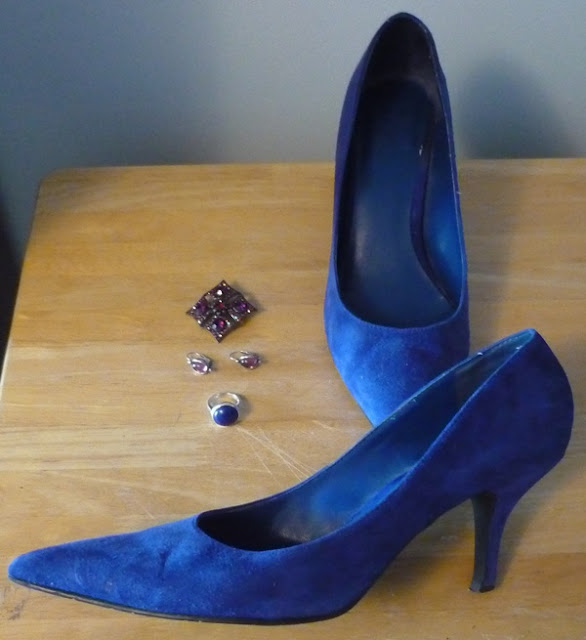 Love these shoes. When I bought them many years ago, Feet First (a store that no longer exists) had an entire sale rack of them! I would buy another pair in a heartbeat. You don't find the perfect blue suede shoe that often! 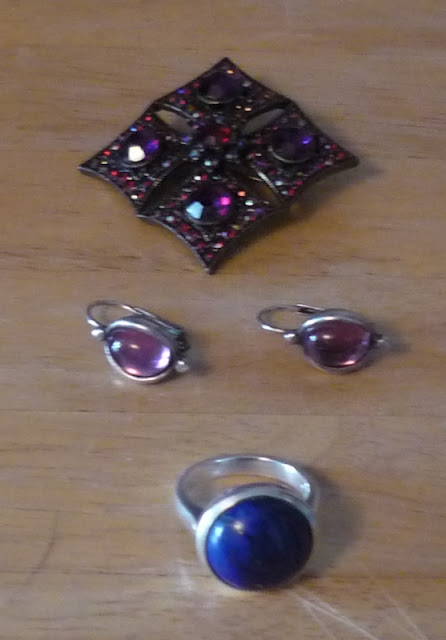 I hear brooches are back in. When were they out?


So here's what I've read since the last "Literary Stylings"here.

This was our Book Club book: "H is for Hawk" by Helen Macdonald. 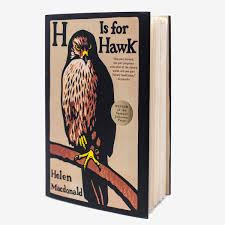 I seriously LOVED this book. I gave my copy away last night to my WW receptionist Betty, so I forgot to take a picture of it.

This is Helen and Mabel, her goshawk. 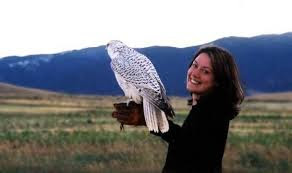 My fringe-y plumage is meant to emulate Mabel's chest feathers. I told you it was a stretch.

But yes, read this book. It's non-fiction, but not like any non-fiction I've ever read. Helen loses her father, and heals by training her new goshawk, Mabel. It's also about T.H. White, the author of "A Once and Future King" (about the young King Arthur). But the prose is lush and delicious, and you feel and smell and see everything she describes so perfectly. I bawled my eyes out in one section. It made me want to go on a Book Club road trip to the predatory bird sanctuary up-Island. Absolutely recommended. 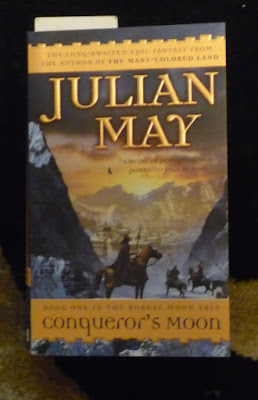 I am a big Julian May fan, having read her "Pliocene Exile" series many years ago (I pulled out the first book, "The Many-Coloured Land" for L to read, but I might dig into it myself again). This is "Conqueror's Moon: Book One of the Boreal Moon Tale" and it's similar to Patrick Rothfuss' "The Name of the Wind" in that it's framed by the older character telling the story of his life.

It's a sprawling novel of intrigue, politics and fantasy (magic is practiced, and there are supernatural creatures). May is an expert world-builder and manages her characters very well - even though there are millions of names and places, after about 100 pages, I was good. She wisely focuses on a few main characters and checks in with them often, so that you don't lose track of what's happening to whom (looking at you, George R. R. Martin!). Recommended.

I have the second book in this series (there's a third, which I'll have to find) and will plunge into that next. I've read every other book of hers I could find since I first found her books in the late 90s.

-----------------
From two books I loved and enjoyed, to a book that I'm loathing, but still reading (it's my bathroom book, so whatever). Lawrence Block's "Random Walk" is just awful. I'm 50 pages from the end, so may as well finish it.
It starts with a man whose name I can't remember because he isn't interesting or fleshed out as a character, who one day goes for a walk. And he walks. And random people join him. And they mysteriously start healing (including throwing away a wheelchair and curing cancer!). The parts about the walkers are boring - they go on about spiritualism and being one with the earth - a lot of 80s mumbo-jumbo. I'm not against spiritualism, mind you, but the way it's presented here is cloying, grating and just ugh.

AND, it's about a serial killer! Because this is Lawrence Block, Grand Master of Crime Fiction, known for his Matthew Scudder novels, his Bernie Rhodenbarr novels. One of my favourite crime fiction writers. The killer randomly drives around and targets women and kills them, purely for pleasure. It's hugely sexist, offensive and shockingly graphic in the depictions of sex, torture and killing. But what the heck? I know we're aiming for the killer to meet up with the massive crowd of random walkers (I read the full reviews online when I started reading this and going, "WTF?" so I know what's going to happen), but the two parts feel like entirely separate books.

I will be tossing this one when I'm done, even though I have nearly everything Block has written. Avoid, avoid, avoid.