Another week, another Monday. Today, I just felt like ruffles. And plaid. 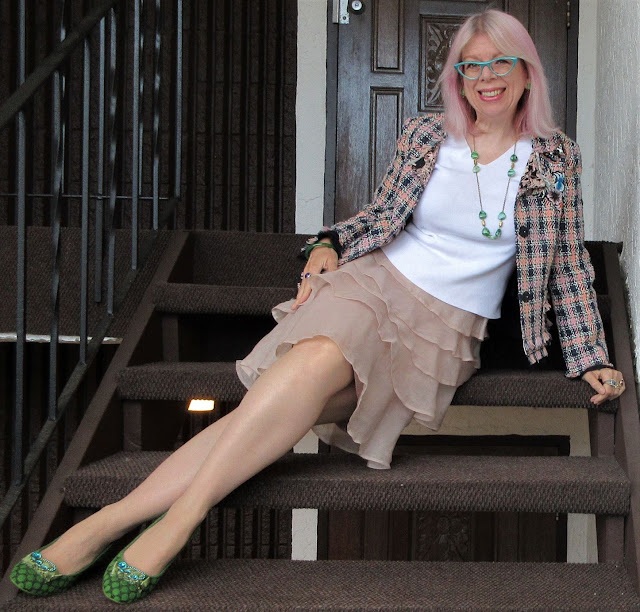 And my Kermit shoes!

I was idly scrolling through Tom + Lorenzo's coverage of Giambattista Valli's Resort 2021 Collection (here, link 'cause I love), and I noticed GV showing a longer tiered ruffly skirt, very similar to this one; they even paired it with a Chanel-inspired tweedy jacket (here). 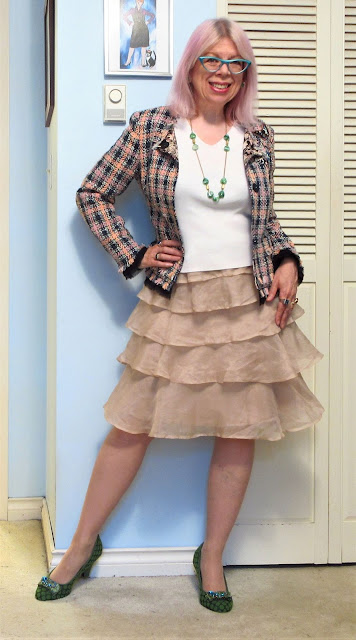 Right away, I thought, "I have pieces just like those!" And here we are!

I did love wearing this jacket again - it's so cool. I picked out the bits of green in the plaid pattern this time for my accessories (vs. last time, with pink and orange).

Isn't the skirt cool? I have had it for a few years, and it's Flashback-worthy even though I haven't worn it too many times, so we'll take a boo at that shortly. 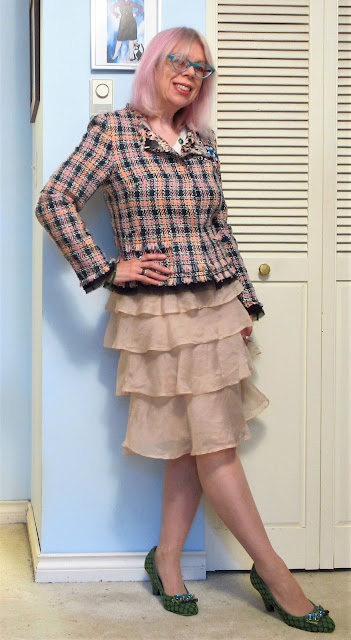 For some reason, Vizzini loves to lick it. Silly kitty. 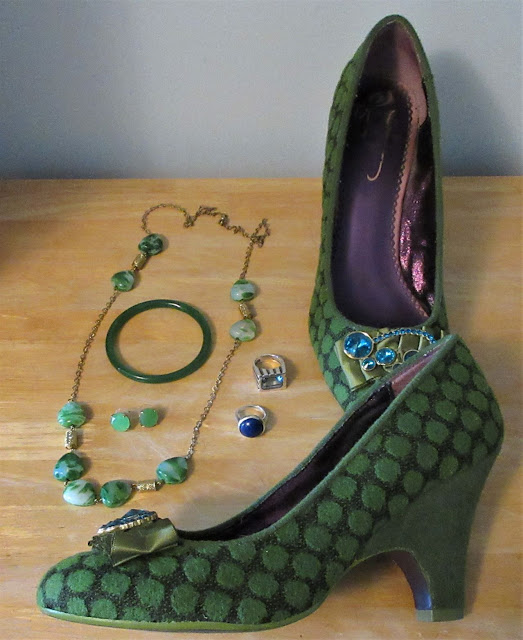 I actually had a different pair of shoes picked out, but then my eyes alighted on these beauties. I've had my "Kermit" shoes for a long time, going back to 2012, so we're also doing a Flashback on them too. Why the heck not? 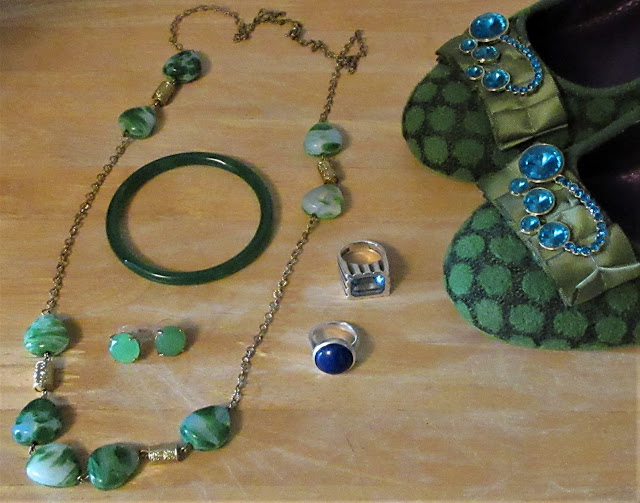 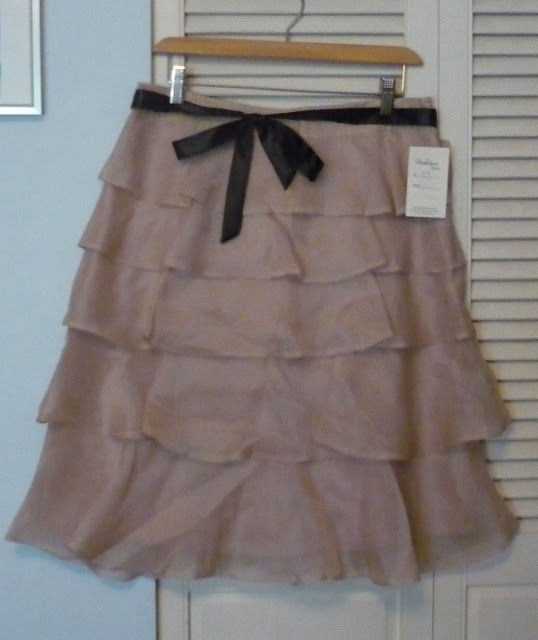 I removed the black satin ribbon belt (I have a stash of these - they come in handy once in a while).

I first wore it in June 2017, in what felt like a very adventurous outfit at the time. I love the mix of plaid, leopard belt and funky shoes.

I still have that corset-style top - I have had it for ages, going back to the late 00s. Must dig it out.

The skirt is quite challenging to style - it has zero stretch and that blush colour is tricky to match to, so I went with black the first couple of times I wore it.

This was in August 2017. You'll recognize my t-strap shoes - they're also old friends that I've had for years. I gave the dress/tunic thing to Yvonne.

This remains one of my favourite outfits of all time - it's so soft and pretty, and I love how these colour all play together. 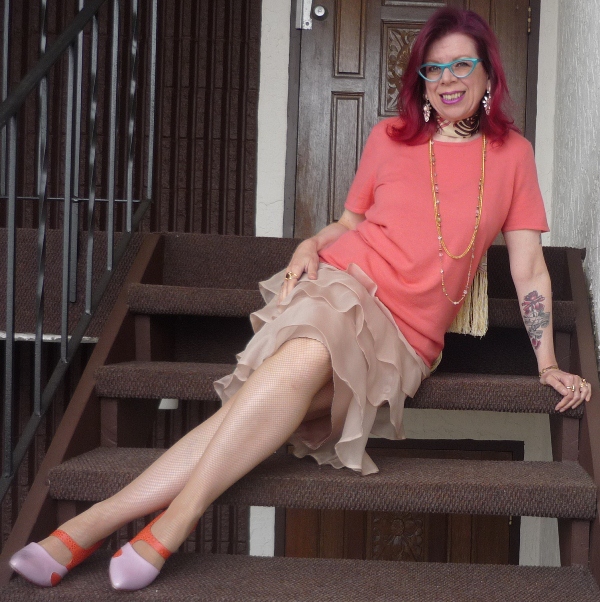 This was in May 2018 - I still have everything in this outfit, except for one of the necklaces. Did you notice I'm wearing a fringed scarf around my neck, hanging down my back?

I defaulted to black again in July 2019.

And then I wore it in September 2019 with soft pink. 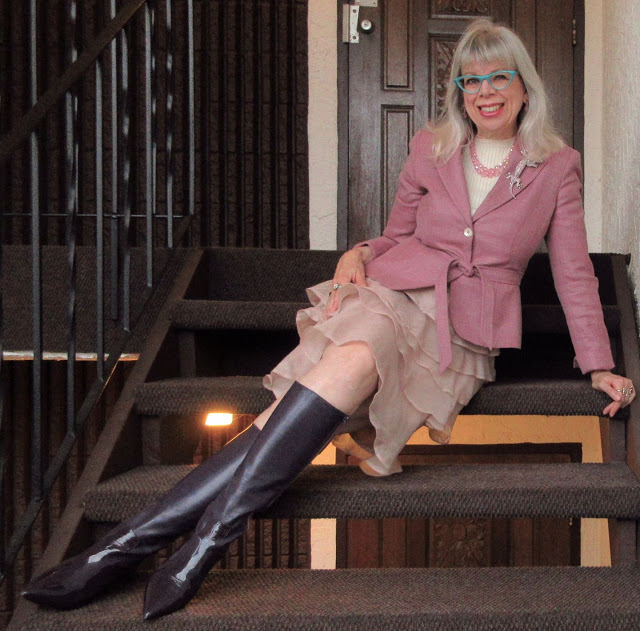 Such a fun look! We saw this in the Effortless boot Flashback (here).

With today's outfit, I'm at 6 wears, which works out to $3.00 each. I'm fine with that - and the skirt remains in my wardrobe, to be pulled out once or twice a year. I'd love to hear some suggestions for styling it - the blush colour goes well with oranges and pinks.

And now, let's revisit my Kermit shoes! Why do I call them this? Because they are actually wool on the surface, and that reminds me of Kermit the Frog (also, it's not easy being green). The dots on them are fuzzy and raised! I bought them at She She Shoes on sale for $99.00, probably in the after-Christmas sales in December 2011.

I can tell that I didn't have a lot of green in my wardrobe then. The shoes have teal crystal decorations on the toes, so I've often done teal or turquoise accents to pick up on them. 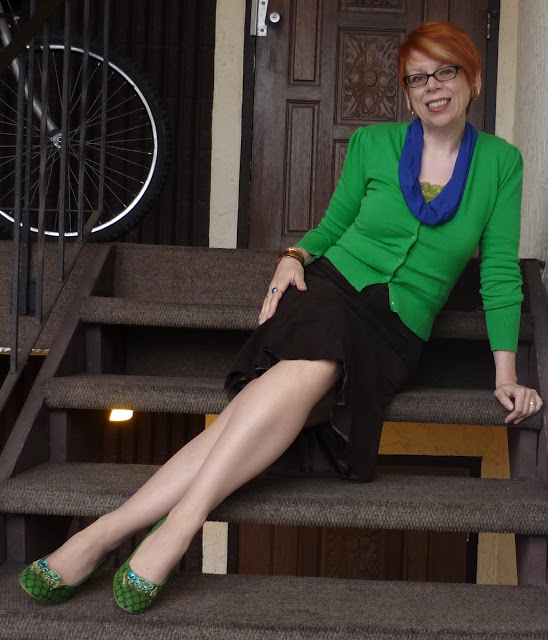 I see I picked up a green cardigan!

Second wearing in May 2012 - I had that green velvet jacket for a long time. I like all these colours together. 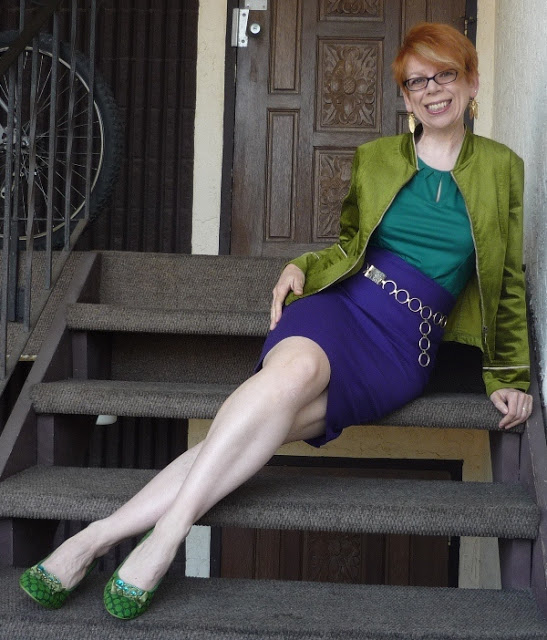 I still have that belt (it's an old one of Mom's). 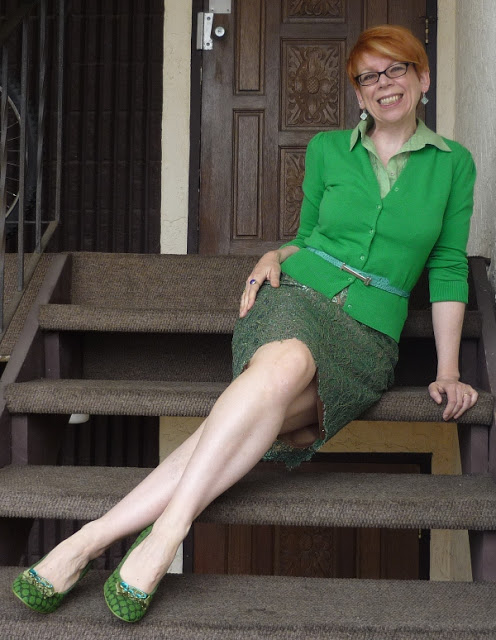 I'm sure my coworkers joshed me about it not being St. Patrick's Day.

Aw, Vizzini is only a year old there! Look at our little gangly-legged guy.

As the year-long wardrobe challenge ate up most of 2012, I didn't wear the shoes again until March 2013. 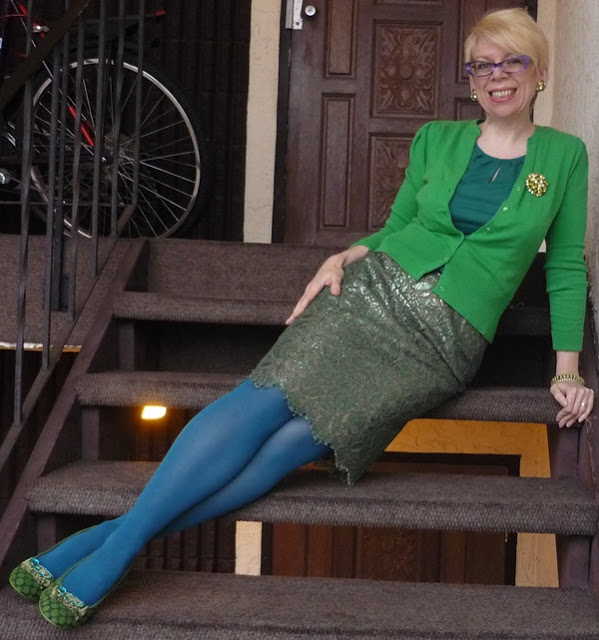 It's my St. Paddy's Day outfit! It's a "kitchen sink" outfit: this is everything green that I owned (the tights were actually teal, but photographed blue).

I didn't worry too much about matching my greens - the exact colour isn't that important. I'm surprised that I didn't wear the shoes for a full year, though!

I let the shoes be on their own with a yellow and blue outfit in July 2014.

I miss that blouse, but it refused to stay done up.

I wore the shoes for the annual Christmas party in December 2014 at Nick and Karen's.

The one and only wearing of that black dress (it just wasn't me). I remember getting soaked walking to the party - it was a very rainy December night.

I love this outfit from July 2015. That soft peachy thin sweater was a favourite - it got ruined in the laundry with big blotches from a dark item I washed with it. 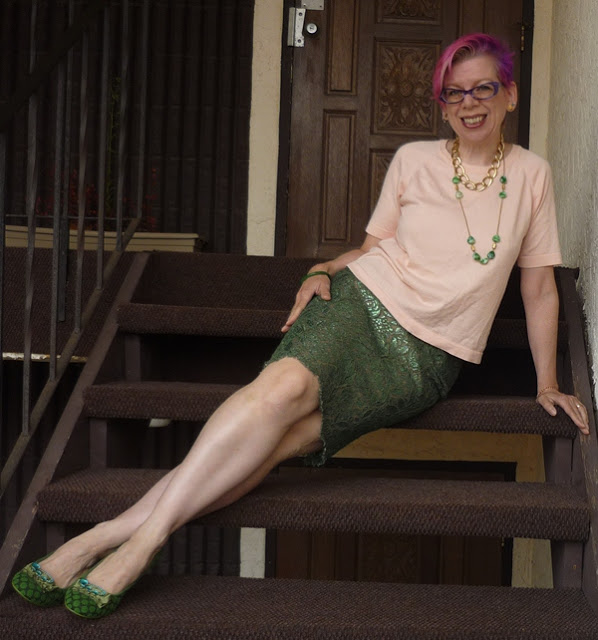 Recognize the necklace? I wore it today. I still have that skirt, by the way - this is its third time matched with the shoes (so far!).

I wore the the shoes for my birthday party in October 2015.

This is a very rare sighting of my Betsey Johnson dress, which I still have, although it is too tight right now.

I'm recovering from one of my arm tattoos in August 2016, and wearing my mint "wings."

In November 2016, I mixed some colour, pattern and metallic.

I still have that skirt.

Another favourite outfit, in May 2018. 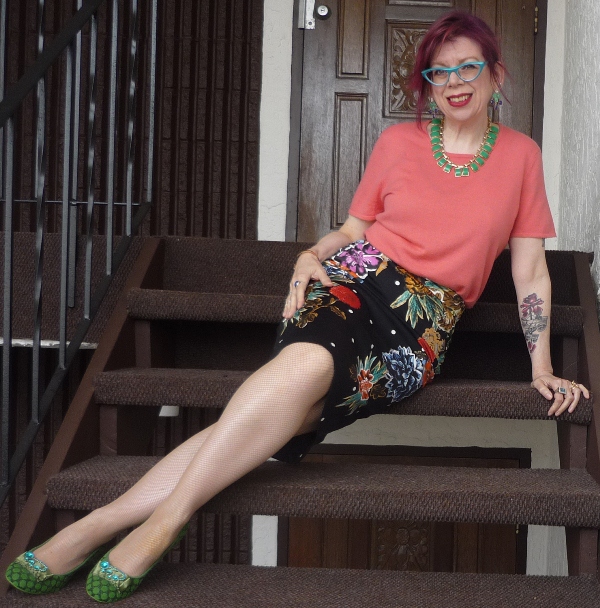 I don't have the necklace or earrings anymore, but I have all the rest.

With a long drapey cardi in November 2018.

We saw this in my Dries Van Noten Pirate skirt Flashback (here).

When I found this dotted blouse in the thrift store, I knew I'd be wearing it with these shoes.

This outfit is from January 2019. I didn't keep the blouse - it was incredibly difficult to get into (and yes, I did use the side zip!). The skirt is part of my vintage Valentino suit.

My collection of green clothing has expanded substantially over the years - this is in June 2019.

Doing the "bookend" trick of matching the shoes to the top. Easy-peasy.

I wore them around the house for a little while, but that's it.

And now I shall leave you with pictures of Vizzini, who's been snoozing on the deck non-stop.

L likes to point out that I behave like a 10-year-old girl with the cat, always wanting to pick up my kitty and carry him around.

I do tend to bug him, by sitting with him and petting him.

I caught him mid-yawn! He looks very fierce!

After my disruption to his nap, he wandered inside for a flop on the rug.

Of course, I can't resist that tum! More tummy rubs shall ensue!
Posted by Sheila at 5:54 PM